Science (from the Latin word scientia, meaning "knowledge") is a systematic enterprise that builds and organizes knowledge in the form of testable explanations and predictions about the universe.

The earliest roots of science can be traced to Ancient Egypt and Mesopotamia in around 3500 to 3000 BCE. Their contributions to mathematics, astronomy, and medicine entered and shaped Greek natural philosophy of classical antiquity, whereby formal attempts were made to provide explanations of events in the physical world based on natural causes. After the fall of the Western Roman Empire, knowledge of Greek conceptions of the world deteriorated in Western Europe during the early centuries (400 to 1000 CE) of the Middle Ages, but was preserved in the Muslim world during the Islamic Golden Age. The recovery and assimilation of Greek works and Islamic inquiries into Western Europe from the 10th to 13th century revived " natural philosophy", which was later transformed by the Scientific Revolution that began in the 16th century as new ideas and discoveries departed from previous Greek conceptions and traditions. The scientific method soon played a greater role in knowledge creation and it was not until the 19th century that many of the institutional and professional features of science began to take shape; along with the changing of "natural philosophy" to "natural science."

Science is based on research, which is commonly conducted by academic and research institutions, as well as in government agencies and companies. The practical impact of scientific research has led to the emergence of science policies that seek to influence the scientific enterprise by prioritizing the development of commercial products, armaments, health care, public infrastructure, and environmental protection. ( Full article...) 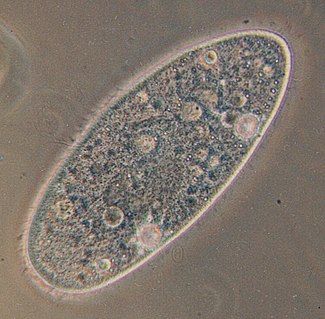 Paramecium aurelia, the best known of all ciliates. The bubbles throughout the cell are vacuoles. The entire surface is covered in cilia, which are blurred by their rapid movement. Cilia are short, hair-like projections that help with locomotion.

Dr. Kaku is the author of several scholarly, Ph.D.-level textbooks and has had more than 70 articles published in physics journals covering topics such as superstring theory, supergravity, supersymmetry, and hadronic physics. He is also known as an author of popular science books, including the best-sellers Beyond Einstein, Visions, Hyperspace, and Parallel Worlds, and the host of several radio shows, as well as being a popular figure in science television shows due to his accessible approach to the layman on explaining complex physics.

22 January 2021 – COVID-19 pandemic
A panel of scientists that advises the British government announces that a variant first discovered in the United Kingdom is 30% more deadly than the original SARS-CoV-2 virus. (Forbes)
19 January 2021 – Discoveries of exoplanets
Scientists discover that WASP-107b is a super-puff. WASP-107b is an exoplanet the same size as Jupiter but with one tenth the mass, located 212 light years away from Earth. (CBS News) (Sci-News)
30 December 2020 – 2020 in paleontology
Scientists at the Russian Academy of Sciences announce the discovery of a "well-preserved" woolly rhinoceros carcass in Abyysky District, Sakha, Russia, which was revealed by melting permafrost in August. The Russian Academy of Sciences says that the woolly rhinoceros was likely 3 or 4 years old when it died by drowning in the river, and could be anywhere from 20,000 to 50,000 years old. (ABC News)
18 December 2020 –
A review of some recent medical studies shows that memory T cells may play a role in a phenomenon known as cross-reactivity, which researchers found may perhaps give certain people, in some cases, some level of immunity to the virus that causes COVID-19 even without them having been exposed to or infected with the virus, or having received a vaccine. There are certain structural and clinical similarities between the virus that causes COVID-19 and the other coronaviruses that are related to it, which cause SARS and MERS. (MSN)
16 December 2020 – Chinese space program
China National Space Administration (CNSA) spacecraft Chang'e 5 returns to Earth carrying samples of lunar rocks and soil from the surface of the Moon. The capsule will be airlifted to Beijing for formal opening and the samples will be made available to scientists in other countries, according to the CNSA. (The Guardian)
6 December 2020 – Uncrewed spaceflights to the International Space Station
A SpaceX Falcon 9 launches a cargo ship into orbit to re-supply the International Space Station. (CBS News)