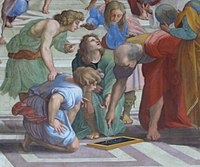 Euclid's Elements ( Greek: Στοιχεῖα) is a mathematical and geometric treatise, consisting of 13 books, written by the Hellenistic mathematician Euclid in Egypt during the early 3rd century BC. It comprises a collection of definitions, postulates ( axioms), propositions ( theorems) and proofs thereof. Euclid's books are in the fields of Euclidean geometry, as well as the ancient Greek version of number theory. The Elements is one of the oldest extant axiomatic deductive treatments of geometry, and has proven instrumental in the development of logic and modern science.

It is considered one of the most successful textbooks ever written: the Elements was one of the very first books to go to press, and is second only to the Bible in number of editions published (well over 1000). For centuries, when the quadrivium was included in the curriculum of all university students, knowledge of at least part of Euclid's Elements was required of all students. Not until the 20th century did it cease to be considered something all educated people had read. It is still (though rarely) used as a basic introduction to geometry today. ( Full article...)

Pythagorean theorem
Credit:  User:Alvesgaspar
An animated geometric proof of the Pythagorean theorem, which states that among the three sides of a right triangle, the square of the hypotenuse is equal to the sum of the squares of the other two sides, written as a2 + b2 = c2. A large square is formed with area c2, from four identical right triangles with sides a, b and c, fitted around a small central square (of side length b − a). Then two rectangles are formed with sides a and b by moving the triangles. Combining the smaller square with these rectangles produces two squares of areas a2 and b2, which together must have the same area as the initial large square. This is a somewhat subtle example of a proof without words.
edit

Did you know – view different entries

More did you know
Showing 7 items out of 75
edit