Port Moody is a city in Metro Vancouver, enveloping the east end of Burrard Inlet in British Columbia, Canada. Port Moody is the smallest of the Tri-Cities, bordered by Coquitlam on the east and south, and Burnaby on the west. The villages of Belcarra and Anmore, along with the rugged Coast Mountains, lie to the northwest and north respectively. It is named for Richard Clement Moody, the first Lieutenant-Governor of the Colony of British Columbia.

Port Moody is named for Colonel Richard Clement Moody, Royal Engineers. [1]:212 It was established at the end of a trail that connected New Westminster with Burrard Inlet to defend New Westminster from potential attack from the US. After 1859, the town grew rapidly following land grants to Moody's Royal Engineers after the sapper detachment was disbanded in 1863. [2]

The construction of a transcontinental railroad was the condition that prompted British Columbia to enter into confederation in 1871. The small town received little attention until it was declared the terminus of the Canadian Pacific Railway in 1879.

By 1881, the survey of Port Moody had begun. Both John Murray Sr. and Jr. assisted and, in fact, it was John Murray Jr. who named many of the streets after members of his family. The population quickly grew through the early 1880s. Andrew Onderdonk was the contractor who, under government contract, built 227 miles of line from Port Moody, via Hope, Yale and Savona. Onderdonk built a large wharf and receiving area and started rail construction from Port Moody in 1883. The line was finished in 1885. As the Western Terminus of the CPR almost everyone had high hopes that Port Moody would become a major west coast metropolis.

The railway was completed with the last spike driven at Craigellachie on November 7, 1885 and a train arriving at Port Moody the next day. The first scheduled passenger transcontinental train arrived on July 4, 1886, a date which is still celebrated during Golden Spike Days. Real estate prices soared, but soon fell flat when a 12 mile branch line was built westward along the inlet to Vancouver in 1887.

While many people lost a great deal of money and moved on, others, including real estate tycoon and ship captain, James A. Clarke, and several lumber mills, decided to remain. On April 7, 1913, Port Moody's Council met for the first time as a city.

The City of Port Moody is located entirely in the Federal riding of Port Moody—Coquitlam and is represented in the House of Commons of Canada by Member Of Parliament Nelly Shin.

The City of Port Moody is located entirely in the Provincial electoral district of Port Moody-Coquitlam and is represented in the Legislative Assembly of British Columbia by Rick Glumac.

In 2006, the City of Port Moody had 10,125 private dwellings living within its borders . Booming residential construction may account for part of this population growth; 8,015 residential dwellings are owned while 2,115 are rented. [5]

Of its total population, 45% of Port Moody residents are legally married, 6.25% are in common-law relationships, 5.72% are divorced and 24% are single. [5] 30% of its residents identify themselves as immigrants, slightly higher than the 27% Canadian average. [5]

Mother Languages as reported by each person: Source: [8]

Simon Fraser University is located in nearby Burnaby, while Douglas College maintains a campus in Coquitlam's Town Centre.

Geography and the environment

Over 41 streams flow through Port Moody to Burrard Inlet. [10] The City of Port Moody Stream Stewardship Program manages urban streams, streamside vegetation and watersheds to support the production of fish and insect life for present and future generations. The Port Moody Ecological Society (PMES), a not-for-profit organization, works alongside the city to promote ecological awareness in the area. PMES volunteers operate a salmon and trout hatchery, a water quality lab and public awareness & community outreach programs.

The city has also banned the use of pesticides, and holds annual seminars on how to garden naturally at its Inlet Theatre. City Hall has been pesticide free since 1988. [11]

Port Moody won a large number of provincial, national and international awards. In 2004, the city received a prestigious award from the UN sponsored International Awards for Liveable Communities in the category Planning for the Future. The city also received third place overall for cities of its size.

In 2008, the Canadian Federation of Independent Business highlighted Port Moody as the most fiscally responsible among British Columbia's 28 largest cities.

In addition to Vancouver-based media outlets, Port Moody is served by the community newspaper The Tri-City News. Local FM radio station CKPM-FM is based in Port Moody and serves the Tri-Cities (and beyond) at 98.7 MHz. 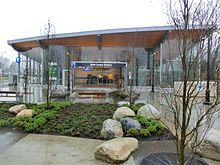 As part of Metro Vancouver, Port Moody is connected to the TransLink public transit system by way of numerous bus routes. It also has the first station on the West Coast Express commuter rail line outside downtown Vancouver. The Millennium Line's Evergreen Extension, part of TransLink's SkyTrain system, links Port Moody with Coquitlam to the east and Burnaby and Vancouver in the west. In August 2018, U-bicycle launched a dockless bicycle sharing system in the city. [13] Additionally, Modo has five vehicles located in Port Moody available for carsharing. [14] As of June 2019, seven Level 2 electric vehicle charging stations were located in Port Moody, with the capacity for 14 vehicles. [15] [16]

On June 16, 2004, Port Moody was officially trademarked as the “City of the Arts.” Historically, Port Moody was a destination for artists because of its low rent, scenery and ambient lighting. Today, it is home to annual festivals, arts groups and diverse facilities that help foster a creative community.

The Port Moody Arts Centre offers a number of fine arts and photography classes for residents of all ages, and has three diverse art galleries that feature a number of constantly changing works. The Port Moody Station Museum hosts a wide assortment of artifacts from Port Moody's past, and has restored a heritage train venosta for tours. Arts Connect is an organization that connects artists from the Tri-Cities (Coquitlam, Port Coquitlam and Port Moody), and hosts regular artists’ circles. Artists can find studio space in Port Moody at 2709 Esplanade, with open house tours taking place every year in April.

Festivals held in Port Moody include the Canadian Film Festival (February), the Festival of the Arts (September), Rotary Ribfest (July) Search for The Perfect Pint (May) Summer Sundays Concerts, Golden Spike Days (July), the Wearable Art Awards (yearly, next is May 9 & 10, 2009) and the CP Rail Holiday Train (December). Port Moody is also home to the Inlet Theatre, an intimate 200 seat venue.

Service Clubs include the Rotary Club of Port Moody. It's responsible for community events including the Annual RibFest and Search For The Perfect Pint. 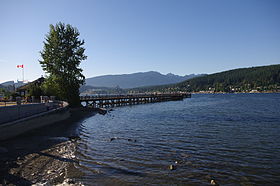 Port Moody is home to Rocky Point Park. It includes 3.8 hectares of space, the park has hiking trails, a newly renovated spray park, a skate park, a bike trials park, a playground, a picnic shelter, a boat launch and a recreational pier. Home to Golden Spike Days, the park is a destination in the summer.

Old Orchard Park is another destination in Port Moody. At about 1.4 hectares in size, it is directly across the inlet from Rocky Point Park and is the northern end of Shoreline Trail. It has a sandy beach, picnic shelter with BBQs and adventure playground in a quiet park setting. Old Orchard Hall is also located here and is used for weddings and other special events.

Finishing construction in 2008, Port Moody has renovated its recreation complex. Home to an Olympic size ice rink, this facility has an indoor running track, a gym, a curling rink and an athlete's lounge. The Port Moody Happening, a quarterly publication, features all recreation programs offered at this new facility.[ citation needed] 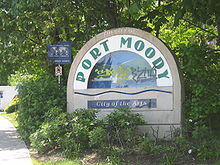