Table of Contents ⇨
Not to be confused with Point Coupee, Louisiana.
Parish in Louisiana 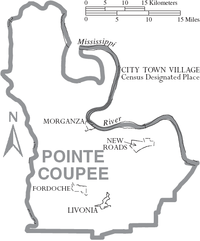 In 2010, the center of population of Louisiana was located in Pointe Coupee Parish, in the city of New Roads. [3]

In 2008, Pointe Coupee was one of the communities that suffered the most damage by Hurricane Gustav.

Pointe Coupee Parish has 498.98 miles of highways within its borders. [6]

Nan Ya Plastics Corporation America has a large plant near Batchelor. Another large employer is NRG / Big Cajun 1 & 2 power plants near New Roads. The parish's economy is heavily reliant upon agriculture, with sugar cane being one of the main cash crops.

The Pointe Coupee Parish School Board serves the parish.

A Co of the 769th BEB (Brigade Engineer Battalion) is an Engineer Company (Combat) that resides in New Roads, Louisiana. This unit is part of the 256TH IBCT and deployed to Iraq in 2004-5 and 2010. Prior to 2008, Pointe Coupee Parish was a Democratic stronghold in presidential elections, only failing to back the party's candidates four times between 1912 & 2004 even as the Solid South became a Republican stronghold at the presidential level. Since then, it has swung to primarily support Republican Party candidates, with Donald Trump winning the county by a margin of over seventeen points in the most recent presidential election of 2016. However, the substantial African-American minority has kept the Republican swing less pronounced compared to many other rural counties throughout the South.