Plantations in the American South Information 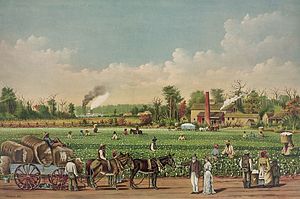 A cotton plantation on the Mississippi, Currier & Ives lithograph, 1884

Plantations are an important aspect of the history of the American South, particularly the antebellum (pre- American Civil War) era. The mild subtropical climate, plentiful rainfall, fertile soils of the southeastern United States, and Native American genocide allowed the flourishing of large plantations, where large numbers of enslaved Africans were held captive as slave labor and forced to produce crops to create wealth for a white elite. 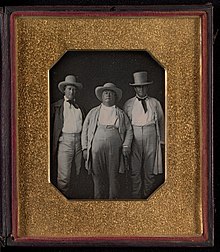 Three planters, after 1845, The Metropolitan Museum of Art 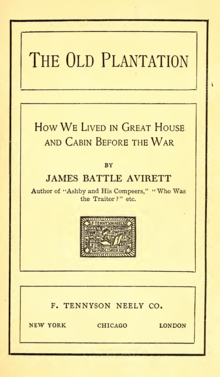 The Old Plantation: How We Lived in Great House and Cabin before the War by Confederate chaplain and planter James Battle Avirett

An individual who owned a plantation was known as a planter. Historians of the antebellum South have generally defined "planter" most precisely as a person owning property (real estate) and 20 or more slaves. [1] The wealthiest planters, such as the Virginia elite with plantations near the James River, owned more land and slaves than other farmers. Tobacco was the major cash crop in the Upper South (in the original Chesapeake Bay Colonies of Virginia and Maryland, and in parts of the Carolinas).

The later development of cotton and sugar cultivation in the Deep South in the early 18th century led to the establishment of large plantations which had hundreds of slaves. The great majority of Southern farmers owned no slaves or owned fewer than five slaves. Slaves were much more expensive than land.

In the " Black Belt" counties of Alabama and Mississippi, the terms "planter" and "farmer" were often synonymous; [2] a "planter" was generally a farmer who owned many slaves. While most Southerners were not slave-owners, and while the majority of slaveholders held ten or fewer slaves, planters were those who held a significant number of slaves, mostly as agricultural labor. Planters are often spoken of as belonging to the planter elite or to the planter aristocracy in the antebellum South.

The historians Robert Fogel and Stanley Engerman define large planters as those owning over 50 slaves, and medium planters as those owning between 16 and 50 slaves. [3] Historian David Williams, in A People's History of the Civil War: Struggles for the Meaning of Freedom, suggests that the minimum requirement for planter status was twenty negroes, especially since a Southern planter could exempt Confederate duty for one white male per twenty slaves owned. [4] In his study of Black Belt counties in Alabama, Jonathan Weiner defines planters by ownership of real property, rather than of slaves. A planter, for Weiner, owned at least $10,000 worth of real estate in 1850 and $32,000 worth in 1860, equivalent to about the top eight percent of landowners. [5] In his study of southwest Georgia, Lee Formwalt defines planters in terms of size of land holdings rather than in terms of numbers of slaves. Formwalt's planters are in the top 4.5% of landowners, translating into real estate worth $6,000 or more in 1850, $24,000 or more in 1860, and $11,000 or more in 1870. [6] In his study of Harrison County, Texas, Randolph B. Campbell classifies large planters as owners of 20 slaves, and small planters as owners of between 10 and 19 slaves. [7] In Chicot and Phillips Counties, Arkansas, Carl H. Moneyhon defines large planters as owners of 20 or more slaves, and of 600 acres (240 ha) or more. [8]

Many nostalgic memoirs about plantation life were published in the post-bellum South. [9] For example, James Battle Avirett, who grew up on the Avirett-Stephens Plantation in Onslow County, North Carolina, and served as an Episcopal chaplain in the Confederate States Army, published The Old Plantation: How We Lived in Great House and Cabin before the War in 1901. [9] Such memoirs often included descriptions of Christmas as the epitome of anti-modern order exemplified by the "great house" and extended family. [10]

Novels, often adapted into films, presented a romantic, sanitized view of plantation life. The most popular of these were The Birth of a Nation (1916), based on Thomas Dixon Jr.,'s best-selling novel The Clansman (1905), and Gone with the Wind (1939), based on the best-selling novel of the same name (1936) by Margaret Mitchell.

On larger plantations an overseer represented the planter in matters of daily management. Usually portrayed as uncouth, ill-educated and low-class, he had the difficult and often despised task of middleman and the often contradictory goals of fostering both productivity and the enslaved work-force. [11]

Southern plantations depended upon slaves to do the agricultural work. "Honestly, 'plantation' and 'slavery' is one and the same," said an employee of the Whitney Plantation in 2019. [12]

"Many plantations, including George Washington's Mount Vernon and Thomas Jefferson's Monticello, are working to present a more accurate image of what life was like for slaves and slave owners." [13] "The changes have begun to draw people long alienated by the sites' whitewashing of the past and to satisfy what staff call a hunger for real history, as plantations add slavery-focused tours, rebuild cabins and reconstruct the lives of the enslaved with help from their descendants." [12]

McLeod Plantation, which Dylann Roof visited not long before his shootings at a Charleston church in 2015, focuses primarily on slavery. "McLeod focuses on bondage, talking bluntly about “slave labor camps” and shunning the big white house for the fields." [12] "'I was depressed by the time I left and questioned why anyone would want to live in South Carolina,' read one review [of a tour] posted to Twitter." [13]

Crops cultivated on antebellum plantations included cotton, tobacco, sugar, indigo, rice, and to a lesser extent okra, yam, sweet potato, peanuts, and watermelon. By the late 18th century, most planters in the Upper South had switched from exclusive tobacco cultivation to mixed-crop production.

In the Lowcountry of South Carolina, even before the American Revolution, planters typically owned hundreds of slaves. (In towns and cities, families held slaves to work as household servants.) The 19th-century development of the Deep South for cotton cultivation depended on large tracts of land with much more acreage than was typical of the Chesapeake Bay area, and for labor, planters held dozens, or sometimes hundreds, of slaves.

Antebellum architecture can be seen in many extant "plantation houses", the large residences of planters and their families. Over time in each region of the plantation south a regional architecture emerged inspired by those who settled the area. Most early plantation architecture was constructed to mitigate the hot subtropical climate and provide natural cooling.

Some of earliest plantation architecture occurred in southern Louisiana by the French. Using styles and building concepts they had learned in the Caribbean, the French created many of the grand plantation homes around New Orleans. French Creole architecture began around 1699, and lasted well into the 1800s. In the Lowcountry of South Carolina and Georgia, the Dogtrot style house was built with a large center breezeway running through the house to mitigate the subtropical heat. The wealthiest planters in colonial Virginia constructed their manor houses in the Georgian style, e.g. the mansion of Shirley Plantation. In the 19th century, Greek Revival architecture also became popular on some of the plantation homes of the deep south.

Common plants and trees incorporated in the landscape of Southern plantation manors included Southern live oak and Southern magnolia. Both of these large trees are native to the Southern United States and were classic symbols of the old south. Southern live oaks, classically draped in Spanish moss, were planted along long paths or walkways leading to the plantation to create a grand, imposing, and majestic theme. Plantation landscapes were very well maintained and trimmed, usually, the landscape work was managed by the planter, with assistance from slaves or workers. Planters themselves also usually maintained a small flower or vegetable garden. Cash crops were not grown in these small garden plots, but rather garden plants and vegetables for enjoyment.

PLANTATIONS IN THE AMERICAN SOUTH