Table of Contents ⇨
Not to be confused with Plaistow, Newham.
Place in New Hampshire, United States 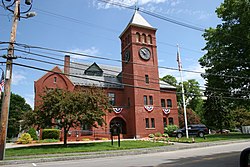 Plaistow was officially established as a town in 1749 after the 1739 resolution of a long-running boundary dispute between the Province of Massachusetts Bay and the Province of New Hampshire. [2] It is the only town outside the United Kingdom with the name Plaistow. In 1776 the western part of Plaistow became a separate town, Atkinson.

The present town hall was built in 1895. Each year, the town celebrates "Old Home Day", with a parade, fireworks, and carnival-type atmosphere on the Town Hall Lawn to celebrate the town's anniversary.

There were 2,871 households out of which 35.6% had children under the age of 18 living with them, 60.1% were married couples living together, 10.7% had a female householder with no husband present, and 25.1% were non-families. 19.1% of all households were made up of individuals and 6.0% had someone living alone who was 65 years of age or older. The average household size was 2.69 and the average family size was 3.10.

Timberlane Regional High School has had noticeable success in music, theatrical performance, wrestling, and softball.[ citation needed] The school offers access to vocational programs at Salem High School and Pinkerton Academy. Timberlane students participating in the program start during the 11th grade and spend two to three periods a day at either Salem or Pinkerton. Upon graduation, the participating students receive an associate's degree along with a high school diploma.

Plaistow's economy is centered along New Hampshire Route 125, a north-south road that connects the town with Haverhill, Massachusetts, to the south and Kingston, Epping, and Rochester, New Hampshire, to the north. Local businesses and numerous large chain stores are located along Route 125, which has become known for problems with heavy traffic during weekday commuting and weekend shopping hours. Route 125 intersects with Interstate 495 in Massachusetts 2 miles (3 km) south of the center of Plaistow. Commuters to Massachusetts are able to use a New Hampshire park and ride facility located on Westville Road, just east of Route 125.

Pan Am Railways (formerly the Boston and Maine Railroad) operates the main railroad line from Boston to Portland, Maine, which is utilized by Amtrak and by freight trains, running through Plaistow. Passenger stations for the Amtrak Downeaster are available in Haverhill to the south and Exeter to the north. A proposal to extend existing MBTA commuter rail service from Boston through Haverhill into Plaistow concluded in 2015 with the decision not to extend the route at this time. [6]

MVRTA bus 13 runs from the center of Haverhill to just south of the state border, where it stops on Route 125. While the bus does not allow people to get on or off in Plaistow, businesses close to the state border are within walking distance of the bus stop.