Table of Contents ⇨
Unincorporated town in Nevada, United States
For a definition of the word "pioche", see the Wiktionary entry pioche.

Pioche is an unincorporated town [1] in Lincoln County, Nevada, United States, approximately 180 miles (290 km) northeast of Las Vegas. U.S. Route 93 is the main route to Pioche and bypasses the town center just to the east, with Nevada State Route 321 and Nevada State Route 322 providing direct access. Its elevation is 6,060 feet (1,850 m) above sea level. Pioche is the county seat of Lincoln County. Pioche is named after François Louis Alfred Pioche, a San Francisco financier and land speculator originally from France. [2] [3] The town's population was 1,002 at the 2010 census. [4] 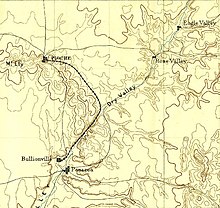 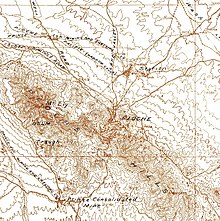 The first modern settlement of the area occurred in 1864 with the opening of a silver mine. The settlers abandoned the area when local Indian tribes launched a series of raids and massacres. Recolonization was launched in 1868, after the Indian raids were stopped and François Pioche bought the town in 1869. By the early 1870s, Pioche had grown larger, to become one of the most important silver-mining towns in Nevada.

Because of the town's remoteness which had earlier allowed the Indian raids to occur, Pioche had a reputation for being one of the roughest towns in the Old West. Local lore says 72 men were killed in gunfights before the first natural death occurred in the camp. This legend is immortalized by the creation of Boot Hill, now a landmark in the city. 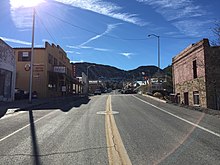 Pioche has a cool semi-arid climate (Köppen BSk) bordering on a humid continental climate (Dfa/Dsa) due to its high altitude and exposure to rain-bearing winds. The high elevation means summers are much cooler than in Clark County, with temperatures of 100 °F or 37.8 °C reached upon only one afternoon every five years, and 90 °F or 32.2 °C reached only upon 23.1 afternoons. The hottest month recorded was July 2005, with a mean maximum of 93.0 °F or 33.9 °C, a record hot day of 105 °F (40.6 °C) on 17 July, and nine days above the century mark from 11 to 19 July. Although summers are mostly dry with mild nights, it is not unknown for “Arizona rains” to penetrate into Lincoln County during July and August, as happened in August 1945 when 5.01 inches (127.3 mm) of rain fell on a total of eleven “wet” days, and during August 1955 when seventeen days saw at least 0.01 inches or 0.3 millimetres of rain.

The fall season sees warm days and cold nights: the freeze-free period usually extends from 17 May to 10 October, although temperatures below 0 °F or −17.8 °C are very rare even during winter with an average of 1.1 mornings falling this low; the coldest temperature in Pioche has been −11 °F (−23.9 °C) on 12 January 1963. The coldest month has been January 1949 with a mean maximum of 27.7 °F (−2.4 °C), although in a normal winter only 10.3 afternoons will not top freezing. During the winter, days are cool to cold – although even in January 7.1 afternoons top 50 °F or 10 °C – and nights are very cold, although snowfall is extremely erratic. During the very wet and cold spell of January and February 1993, 98 inches or 2.49 metres of snow fell in Pioche; however in warm dry winters like 1999/2000 almost no snow may occur. 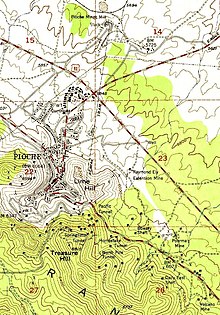 An aerial tramway carried buckets of ore from the mines to the Godbe Mill.

Pioche is known for its "Million Dollar Courthouse," built in 1872. The original cost of $88,000 far exceeded initial estimates and was financed, and refinanced with bonds totaling nearly $1 million. Pioche currently contains the county administrative offices and has one of the oldest grade schools in the state.

Next door to the courthouse sits the old Mountain View Hotel, where President Herbert Hoover is said to have stayed in 1930. Built in 1895, the hotel served the lodging needs of dignitaries visiting Pioche on court business. Although the building no longer serves as a hotel, it is an example of turn-of-the-century western architecture. There is another hotel, the Overland, [7] which is still operating, with 14 themed rooms on the second floor over the main saloon.

An aerial tramway carried buckets of ore from the mines to the Godbe Mill. The tramway ran during the 1920s and 1930s and was used for the transportation of silver and nickel ore. The abandoned tramway used cables which still stretch over parts of the town, with some original ore buckets intact.

The town of Pioche is Nevada Historical Marker 5. [8]