Philip Heath "Phil" Mendelson (born November 8, 1952 [1]) is an American politician from Washington, D.C. He is currently the Chair of the Council of the District of Columbia, elected by the Council on June 13, 2012, following the resignation of Council Chair Kwame R. Brown. He was elected to serve the remainder of Brown's term in a citywide special election on November 6, 2012, [2] and re-elected to a full term in 2014 and 2018. [3]

Mendelson came to Washington from Cleveland Heights, Ohio, [4] in 1970 to attend American University. [5] He graduated with a Bachelor of Arts degree. [6]

Mendelson fought against a developer who wanted to build an office building on Wisconsin Avenue near Upton Street NW. [11] Mendelson was opposed to the developer building an access road over a forested area. [11] After his community group filed a lawsuit to block the road, a court determined that the developer had the right to build the access road. [12] Mendelson tried to block the work using his own body, for which he was arrested. [13] The wooded area was razed, and the access road was built. [13]

Mendelson was critical of a policy of not assessing property taxes on a building until the roof is sealed. [14] One particular developer saved $500,000 of property taxes from delaying the sealing of the roof until later in the construction timeline. [14] Mendelson said the District of Columbia was losing significant amounts of tax revenue from what he called a loophole. [14]

In 1990, Mendelson resigned from the D.C. Democratic State Committee to work for the reelection campaign of Jim Nathanson, member of the Council of the District of Columbia representing Ward 3. [19]

Also in 1990, Mendelson voiced his opposition to iron fences on the Duke Ellington Bridge in Rock Creek Park that were intended to prevent people from jumping off the bridge. [20] He said the fences did not prevent suicide because there were more suicide attempts from the bridge after the fences were erected. [20] An increase in suicide attempts from the nearby Taft Bridge demonstrated that the fences merely diverted, rather than deterred, suicide attempts in his opinion. [20] Mendelson argued against putting fences up again after the Duke Ellington Bridge's scheduled reconstruction and instead post phone numbers for suicide prevention hotlines on the bridge. [20] He was also opposed to building fences on the Taft Bridge. [21] A group of local mental health physicians was in favor of the fences, saying the fences were worthwhile even if they did not deter every suicide attempt. [21]

Mendelson ran unopposed for reelection as an Advisory Neighborhood Commissioner in 1990; [22] he won the election. [23]

When the owner of an residential building proposed constructing townhouses in front of the apartments, Mendelson opposed the idea, saying, "It makes no sense to put eight townhouses on the lawn of an apartment building." [24]

In 1992, Mayor Sharon Pratt Kelly's task force on the homeless made a recommendation that shelter beds should be located equally throughout the District. [25] Other than a few churches, there were no homeless shelters located in Ward 3 at the time. [25] The ward's council member Jim Nathanson opposed establishing homeless shelters in Ward 3. [25] Mendelson was also opposed, saying, "There's no right for the homeless to get shelter in any neighborhood they want." [25]

In 1996, Mendelson ran for an at-large seat on the Council. [29] Mendelson's campaign focused on holding government employees accountable, hiring qualified individuals for government positions, and cutting wasteful and ineffective programs. [6] Mendelson criticized incumbent Harold Brazil for conspicuously leaving a Council meeting just before a vote on whether to reduce pension benefits for newly hired police officers, firefighters, and teachers. [29] Mendelson said Brazil's absence was in line with many other important votes that Brazil for which was absent. [29] He said all Council members should accept a cut in salary due to recent poor performance of the Council. [30]

Brazil won the Democratic primary election. [31] Mendelson came in fourth place [31] with seven percent of the vote. [32] While Mendelson did not appear on the ballot for Advisory Neighborhood Commissioner, he was only individual to notify the Board of Elections that he was willing to represent Single Member District 3C06, and therefore the Board certified him the Advisory Neighborhood Commissioner for that district. [33]

When Congress began moving more and more responsibilities from the District Government to the District of Columbia Financial Control Board, Mendelson argued against doing so, saying that only removes accountability from Mayor Marion Barry. [34] Mendelson said that Mayor Barry should have enough control over the District in order for voters to be able to judge his actions. [34] "These end runs, so to speak, in a way empower Barry, because they get him off the hook and play into the voters' reliance on other people to solve our problems." [34]

The Washington Post wrote an article detailing how the District of Columbia Department of Consumer and Regulatory Affairs does not consistently enforce District laws, does not consistently collect the fees it is due, and has insufficient authority to do either. [36] Mendelson noted that residents build decks without permits and receive no penalty, and neighbors have no recourse. [36] Mendelson said that the Department could only advise residents of the law, and he advocated for giving the Department more authority to enforce the laws that it has purview over. [36] Mendelson later advocated against the Council's confirmation of W. David Watts as the agency's director, saying that the Council was not confirming the best individual for the position. [37] Mendelson continued to advocate for simplifying regulatory requirements and increasing enforcement. [38] When the Council unanimously passed a bill to reform the regulatory process, Mendelson said it was hastily written and had not been opened to enough public opinion. [39] Mendelson asked the Financial Control Board to overturn the Council's bill. [39] While Council member David Catania admitted the bill was not perfect, he also took issue with Mendelson's approach, saying it undermined District home rule. [39]

Council of the District of Columbia

On June 14, 1998, Mendelson announced he would run again for an at-large seat on the Council of the District of Columbia. [42] Mendelson said the public needed to be better informed about the incumbent Council's meetings and votes. [43] He said residents only hear from Council members when they are up for reelection. [43]

Mendelson said the District should be proactive about recruiting developers and businesses, and he thought he could play a role in doing so as a member of the Council. [44] He also said the Council should do more during debates on education. [44]

Mendelson's candidacy was endorsed by the editorial board of The Washington Post [45] the Metropolitan Washington AFL–CIO, [44] the Sierra Club, and the tenant advocacy council TENAC. [46]

Mendelson came in first place in the Democratic primary election with 17 percent of the vote, advancing to the general election. [47]

Mendelson won the general election with 37 percent of the vote. [50] [51] He was sworn in on January 2, 1999. [52] Because Mendelson had no seniority on the Council, Council Chair Linda W. Cropp did not assign him to chair any committees, but he was appointed as a representative to the Metropolitan Washington Council of Governments. [53] 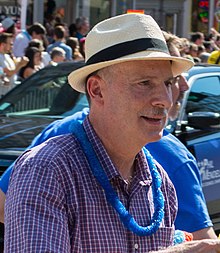 Mendelson at the 2014 DC Pride Parade

In 1999, Mendelson and Catania sponsored a bill to amend a law that required most contractors to hire a majority of District residents to complete contracts with the District government. [54] The new bill would reduce monetary penalties for noncompliance, and ban non-compliant companies from doing business with the District for three years. [54]

Mendelson criticized the Council for passing acts as emergency legislation, which bypasses Congressional review and lasts for a short amount of time, even though the acts were not intended to fill temporary or urgent needs. [55] Mendelson was opposed to Mayor Anthony Williams' proposal to have a children's theme park on islands in the Anacostia River. [56]

From 2005 to 2012 [57] Mendelson served as the chair of the DC Council's Committee on the Judiciary. In 2011 he supported the effort to establish an elected attorney general [58] [59] and pushed for an independent Forensic Science Crime Lab. [60]

From a regional standpoint, Mendelson worked with his counterparts in Montgomery and Prince George's Counties to increase the minimum wage. [67] [68]

Mendelson has received national attention for his work to bring Budget Autonomy for the District, [69] [70] the city's laws on gun control [71] and same-sex marriage legalization. [72] [73]

Mendelson ran for a third term, facing progressive challenger Ed Lazere and won renomination with 63% of the vote. [76] He won the general election over Libertarian candidate Ethan Bishop-Henchman. [77]

In 2019, Mendelson proposed changes that would significantly limit the ability for the public to access government records through the Freedom of Information Act. Mendelson claimed that the changes were necessary to limit frivolous requests while activists insisted that the changes would prevent the public from uncovering fraud, waste, and abuses. Mendelson was also criticized for introducing the changes as a technical amendment, not separate legislation, which would require a public hearing. [78]

Mendelson was an active proponent for a no-bid, sole-source contract to launch the District's sports betting program. Mendelson insisted that a competitive bid for the $215 million contract would result in unacceptable delays of two to three years. He downplayed the inexperience of local partners and claimed that any award would risk conflicts of interest. [79] After the Council narrowly approved the bid, it was discovered that the main local partner had no employees and was led by a Maryland resident. [80]

Mendelson has served as a trustee of the Committee of 100 on the Federal City, [38] a member of the board of the Metropolitan Washington Council of Governments, and as the president of the Association of Metropolitan Planning Organizations.