The Pennsylvanian ( /ˌpɛn.səlˈveɪn.jən, -sɪl-, -veɪ.ni.ən/ pen-səl-VAYN-yən, -⁠sil-, -⁠VAY-nee-ən, [2] also known as Upper Carboniferous or Late Carboniferous) is, in the ICS geologic timescale, the younger of two subperiods (or upper of two subsystems) of the Carboniferous Period. It lasted from roughly 323.2 million years ago to 298.9 million years ago. As with most other geochronologic units, the rock beds that define the Pennsylvanian are well identified, but the exact date of the start and end are uncertain by a few hundred thousand years. The Pennsylvanian is named after the U.S. state of Pennsylvania, where the coal-productive beds of this age are widespread. [3] 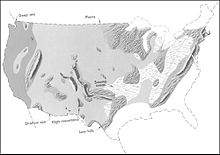 All modern classes of fungi have been found in rocks of Pennsylvanian age. [4]

Amphibians were diverse and common; some were several meters long as adults. The collapse of the rainforest ecology in the mid-Pennsylvanian (between the Moscovian and the Kasimovian) removed many amphibian species that did not survive as well in the cooler, drier conditions. Reptiles, however, prospered due to specific key adaptations. [5] One of the greatest evolutionary innovations of the Carboniferous was the amniote egg, which allowed for the further exploitation of the land by certain tetrapods. These included the earliest sauropsid reptiles ( Hylonomus), and the earliest known synapsid ( Archaeothyris). Small lizard-like animals quickly gave rise to many descendants. Reptiles underwent a major evolutionary radiation, in response to the drier climate that followed the rainforest collapse. [5] [6]

The major forms of life at this time were the arthropods. Due to the high levels of oxygen, arthropods were far larger than modern ones. Arthropleura, a giant millipede relative, was a common sight and the giant dragonfly Meganeura "flew the skies". [7]

The Pennsylvanian has been variously subdivided. The international timescale of the ICS follows the Russian subdivision into four stages:

North American subdivision is into five stages, but not precisely the same, with additional (older) Appalachian series names following:

In the European subdivision, the Carboniferous is divided into two epochs: Dinantian (early) and Silesian (late). The Silesian starts earlier than the Pennsylvanian and is divided in three ages: