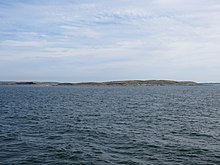 Penikese Island from the north in 2015

Penikese Island entered the historical record in 1602 AD when the English explorer Bartholomew Gosnold and some of his crew visited the island. Their visit frightened four visiting Wampanoag Indians into hiding, and the explorers stole their canoe. [2]

Originally tree covered, at some later time the tree cover was lost, and the island was later used for pasturing sheep. [3] To this day, it remains primarily grass covered. [4] Ownership changed hands several time before the island was purchased by John Anderson, a businessman, who used it for vacationing. [5][ citation needed]

In early 1873, Louis Agassiz, the famous Swiss-American naturalist, persuaded Anderson to give him the island and $50,000 to endow a school for natural history where students would study nature instead of books. The school opened in July 1873, initially headed by Louis Agassiz. Following his death in December, his son Alexander Agassiz ran the school. The school was closed following a fire in 1875, but some of the former students opened in 1888 the Marine Biological Laboratory, in nearby Woods Hole. [5] [6] [7]

In 1904, following local opposition to two previously selected sites on the mainland, the state of Massachusetts purchased the island for $25,000 to use as a leprosy hospital to isolate and treat all Massachusetts residents with the disease. When opened, the Penikese Island Leper Hospital had five patients. After being open for 16 years, it was closed in 1921 and the thirteen patients were transferred to the federal leprosy hospital in Carville, Louisiana. At the closing of the hospital, the state burnt and then dynamited the buildings, and all that remains of it is are stone gate posts and a small cemetery. [8]

The island remains under the ownership of the Commonwealth of Massachusetts and is primarily a bird sanctuary. There is no permanent population on the island. A residential school for special-needs juvenile boys was opened in 1973, so at any time, there may be school staff and some students on the island. [5] There may also be visitors and researchers on island from time to time, as the island is publicly owned and is still used at times for biological research. [9] [4] Beginning in 1990, the island was used as a test site for efforts to reintroduce the endangered American burying beetle, which appears to have succeeded; by 1997 the population had persisted for at least five generations since the last release. [10]

Penikese Island School operates a substance abuse treatment program for young men recovering from opiate or alcohol addiction. From 1973 to 2011 the program was a private residential school for troubled boys. The school was alternative to juvenile detention, and earned a reputation for its intimate size, quaint setting, and "choice and natural consequences" philosophy, attracting media attention and countless documentaries about the program. The school's mission served teenage boys who had not recovered in more traditional programs.

In the fall of 2015, a long-term opioid-addiction treatment facility named Penikese began operation on the island. According to several newspapers, the treatment center shut down in 2017 after a lack of funding. [11]