Table of Contents ⇨
For other uses, see Peep (disambiguation).

Peeps are marshmallows sold in the United States and Canada that are shaped into chicks, bunnies, and other animals. There are also different shapes used for various holidays. Peeps are used primarily to fill Easter baskets, though recent[ when?] advertising campaigns market the candy as "Peeps - Always in Season", as Peeps has since expanded to include Halloween, Christmas and Valentine's Day; since 2014 it has been available year-round with the introduction of Peeps Minis. They are made from sugar, corn syrup, gelatin, various food dyes and a pinch of salt. 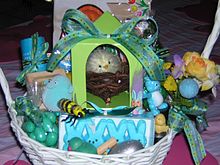 Peeps bunnies in an Easter basket

Peeps are produced by Just Born, [1] a candy manufacturer founded in Bethlehem, Pennsylvania, by Russian immigrant Sam Born (1891-1959). In 1953 Just Born acquired the Rodda Candy Company and its marshmallow chick line, and replaced the painstaking process of hand-forming the chicks with mass production. [2] When founder Sam Born would display a sign for his freshly made candy, he would title it "Just Born", playing off of his last name and the fact that he made his candy fresh daily. [3] According to Mary Bellis, the newly purchased company, Just Born, was soon the "largest marshmallow candy manufacturer in the world." New shapes other than the chicks were produced following a theme according to the season starting in the 1960s. 20 years later, the Marshmallow Peeps Bunny was released as a popular year round shape of the candy. [4] The yellow chicks were the original form of the candy — hence their name — but then the company introduced other colors and, eventually, the myriad shapes in which they are now produced. Peeps were manufactured in different colors such as lavender starting in 1995 and blue (allegedly) in 1998. Prior to that they were only being produced in the traditional colors: yellow, pink and white. New flavors such as vanilla, strawberry, and chocolate were introduced between the years of 1999 and 2002. [5]

In 2009, Just Born expanded the Peeps product line further by introducing Peeps Lip Balm in four flavors: grape, strawberry, vanilla, and cotton candy. [6] Just Born has come out with several other various accessories. Items such as nail polish, wrist bands, umbrellas, plush toys, golf gloves, earrings, and necklaces are produced and sold online and in retail stores. Other companies have produced items based on the popular Peeps candy. Peeps micro bead pillows were made by Kaboodle and conform to one's shape. The company Kaboodle promises that "they'll last a lot longer than their edible counterpart!" [7] Ranging from infant sizes to adult sizes, Peeps Halloween costumes can also be found on the shelves of several costume stores. The first Peeps & Co. store opened in November 2009 in National Harbor, Maryland, Prince George's County. [8] Peeps & Company retail stores were later opened in Minnesota (As of 2019 shut down due to low profits) and Pennsylvania. [9] In 2014, Peeps Minis were introduced, and were intended to be available year-round. 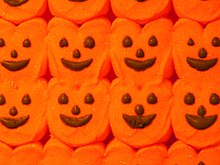 An annual "Peeps Eating" contest is held each year at National Harbor in front of the Peeps & Company store. [10] 2017 winner, Matt Stonie of California, ate 255 Peeps in five minutes. [11] The first such event was arranged by Shawn Sparks in 1994, and had only six participants. [12] Dave Smith started an annual Peep Off in Sacramento after contacting a participant in the first Peep Off. [13] [14] Another contest in Maryland asks that participants create a diorama of a culturally important scene from the modern era, featuring a number of Peeps. The winner gets two free inflatable life jackets. [15]

Several newspapers hold annual contests in which readers submit photos of dioramas featuring Peeps. The St. Paul Pioneer Press was the first paper to hold such a contest.[ citation needed] Similar contests are put on by The Chicago Tribune, and the Seattle Times. These contests frequently correspond with the Easter holiday. MIT also has a yearly Peeps contest. [16] The Washington Post held an annual contest until 2017, when it was discontinued. The smaller Washington City Paper introduced their contest in its place.

The Racine Art Museum is sponsoring the International Peeps Competition from April 1–28. Anyone can enter the contest, centered on the theme "peep-powered work of art". [17]

The following are other contests held in various states. Peeps jousting consists of putting two Marshmallow Chicks into the microwave and seeing which one gets the biggest and therefore affects/deforms the other. "Peepza" is a dessert pizza made with Peeps. Also, blogs were created according to Fox News entitled "101 Fun Ways to Torture a Peep." [18]

Peeps are sometimes jokingly described as "indestructible". In 1999 scientists at Emory University jokingly [19] performed experiments on batches of Peeps to see how easily they could be dissolved, burned or otherwise disintegrated, using such agents as cigarette smoke, boiling water and liquid nitrogen. [20] In addition to discussing whether Peeps migrate or evolve, they claimed that the eyes of the confectionery "wouldn't dissolve in anything". [21] One website claims that Peeps are insoluble in acetone, water, diluted sulfuric acid, and sodium hydroxide (the site also claims that the Peeps experimental subjects sign release forms). [22] Concentrated sulfuric acid seems to have effects similar to the expected effects of sulfuric acid on sugar. [23]

This debate featured in an episode of the sitcom Malcolm in the Middle ("Traffic Jam"), in which Francis, insisting the "Quacks" (as they were called) would dissolve in his stomach rather than expand, takes up the dare to eat 100 of them and does so, but gets very sick in the process.

As marshmallow ages exposed to air — it dehydrates, becoming "stale" and slightly crunchy. According to Just Born, 25%-30% of their customers prefer eating Peeps stale. [24]

Barry Church, a football player for the Dallas Cowboys, was unable to attend training camp due to an unexpected root canal. Peeps offered Church a season's supply of their product—in that marshmallows are a lot softer on the teeth than the Jolly Ranchers which caused Church's requirement of a root canal. [25] 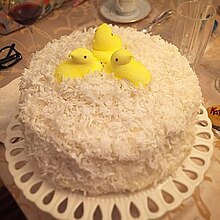 Peeps can also be used as a marshmallow topper for hot chocolate. [27]

A recipe for "Peepshi" involves placing a Peep onto a Rice Krispie Treat and wrapping it in a Fruit by the Foot, to create a single "Peepshi roll" in the style of a sushi roll. [28]

In April 2017, several internet and Twitter postings, and TV news stories claimed 'outrage' that Peeps were being used as a pizza topping. [29]