Paragould is the county seat of Greene County, and the 19th-largest city in Arkansas, in the United States. The city is located in northeastern Arkansas on the eastern edge of Crowley's Ridge, a geologic anomaly contained within the Arkansas delta.

The city's name is a blend combining the last names of competing railroad magnates J. W. Paramore and Jay Gould. Paramore's Texas & St. Louis Railway (later the Cotton Belt) and Gould's St. Louis, Iron Mountain and Southern Railway (later the Missouri Pacific) intersected here in 1882. A group of citizens chose the name, and it is believed to be the only city in the world with this name. Gould objected to his name's being second and refused to list the new town on his schedules. [6] 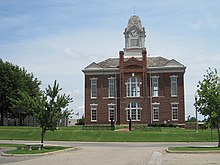 The former Greene County Courthouse is one of twelve sites in Paragould listed on the National Register of Historic Places.

There were 8,941 households out of which 31.9% had children under the age of 18 living with them, 53.7% were married couples living together, 11.4% had a female householder with no husband present, and 31.4% were non-families. 27.5% of all households were made up of individuals and 13.0% had someone living alone who was 65 years of age or older. The average household size was 2.40 and the average family size was 2.92.

On December 15, 2012, it was announced that "beginning in 2013, the department would deploy a new street crimes unit to high crime areas on foot to take back the streets." [12] The remaining town hall meetings to inform the public of the new plan were cancelled due to the volume of threats received as a result of national media exposure. This was done for public safety, as continuing to hold the meetings may have posed a danger to attendees. It is unknown at this time if the plan will still be put into effect. [13][ needs update]