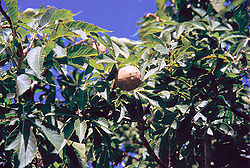 The tree species Aesculus glabra is commonly known as Ohio buckeye, American buckeye, or fetid buckeye. A. glabra is one of 13–19 species of Aesculus.

It is native primarily to the Midwestern and lower Great Plains regions of the United States, extending southeast into the Nashville Basin. [2] It is also found locally in the extreme southwest of Ontario, on Walpole Island in Lake St. Clair, and in isolated but large populations in the South ( Adams County, Mississippi). [2] It is a medium-sized deciduous tree growing to 15 to 25 m (49 to 82 ft) tall.

The foliage and fruits contain tannic acid and are poisonous to cattle and humans. [3] [4] 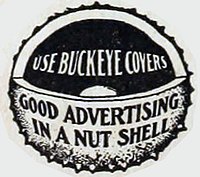 Top to bottom: Dried buckeye nuts; closeup of a buckeye trunk; a buckeye nut used in an early 20th century ad, evoking the Seal of Ohio

The Ohio buckeye is the state tree of Ohio, and its name is an original term of endearment for the pioneers on the Ohio frontier, with specific association with William Henry Harrison. Capt. Daniel Davis [5] of the Ohio Company of Associates, under Gen. Rufus Putnam, traversed the wilderness in the spring of 1788, and began the settlement of Ohio. Davis was said to be the second man ashore at Point Harmar, on April 7, 1788. He declared later that he cut the first tree felled by a settler west of the Ohio River, a "buckeye" tree. Additionally, Colonel Ebenezer Sproat, another founder of that same pioneer city of Marietta, had a tall and commanding presence; he greatly impressed the local Indians, who in admiration dubbed him "Hetuck", meaning eye of the buck deer, or Big Buckeye. [6] [7]

Subsequently, "buckeye" came to be used as the nickname and colloquial name for people from Ohio [8] and Ohio State University's sports teams. Ohio State adopted "Buckeyes" officially as its nickname in 1950, [9] and it came to be applied to any student or graduate of the university.

Native Americans blanched buckeye nuts, extracting the tannic acid for use in making leather. The nuts can also be dried, turning dark as they harden with exposure to the air, and strung into necklaces similar to those made from the kukui nut in Hawaii.

Buckeyes (the nuts) are a recurring theme in Bill Watterson's comic, Calvin and Hobbes, often as one of Calvin's tools of torment.[ citation needed] Watterson himself grew up in Chagrin Falls, Ohio, and the town is believed to have inspired the setting for the comic.[ citation needed]