Numedal is a valley and a traditional district in Eastern Norway located within the county of Buskerud. It traditionally includes the municipalities Flesberg, Nore og Uvdal and Rollag. Administratively, it now also includes Kongsberg. [1] [2]

Numedal is the southernmost valley of the major valleys in Eastern Norway. Numedal is largely a U-shaped valley. Most of the area is mountainous, especially west of the main valley, with steep valley sides. Running north–south, it extends between Flesberg in the south to Rødberg in the north, passing through the municipalities of Flesberg, Rollag and Nore og Uvdal. The Numedalslågen, the third-longest river in Norway, flows through the valley before discharging into Oslofjord at Larvik.

National Road 40 runs from Larvik. National Road 7 crosses Hardangervidda to Geilo. Numedal Line Railway (Numedalsbanen) was opened in 1927 and stopped operations in 1988. The former railroad track from Veggli to Rødberg is now used principally for cycling.

Agriculture and forestry are important industries in the valley along with hydropower generation, as well as growing tourist traffic. [3] [4] [5]

The name comes from Nauma, the Old Norse name for the Numedalslågen, and dal meaning " valley". The origin and meaning of the name are the same as that of Namdalen. [1] [6] 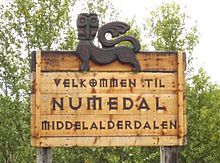 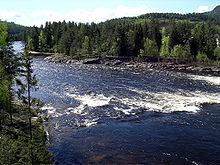 The area along the Numedalslågen from Flesberg up to the Hardangervidda through the valley has a large number of examples of Medieval Scandinavian architecture. There are still over 40 historic timber buildings and four stave churches: Flesberg Stave Church, Rollag Stave Church, Nore Stave Church and Uvdal Stave Church. [7] [8]

Numedal was also the location of one of the "Nordmann's trails" (Nordmannsslepene), which were the old main roads between east and west over Hardangervidda. On the marked paths, remains of Stone Age dwelling places, bog iron works and grave mounds can be seen. [9] [10]

Numedal has a subarctic climate (Dfc).