Winter along the North Shore

The North Shore of Lake Superior runs from Duluth, Minnesota, United States, at the southwestern end of the lake, to Thunder Bay and Nipigon, Ontario, Canada, in the north to Sault Ste. Marie, Ontario, in the east. The shore is characterized by alternating rocky cliffs and cobblestone beaches, with forested hills and ridges through which scenic rivers and waterfalls descend as they flow to Lake Superior.

Ojibwe Wigwam at Grand Portage painted by Eastman Johnson in 1857

Lake Superior was settled by Native Americans about 8000 BC when the Wisconsin Glaciers began to recede. By 500 BC the Laurel people had established settlements in the area and had begun to trade metal with other native peoples. The Laurel people were animists and probably created many of the pictographs present on rock faces along the North Shore and other Canadian rock faces in order to communicate with spirits.

The first white explorer to reach Lake Superior was Frenchman Étienne Brûlé who was sent out by Samuel de Champlain to search for the Northwest Passage in 1623 or 1624. [1] His exploration allowed Champlain to create the first map of the lake in 1632. [1]

Charles Raymbault and Isaac Jogues, Jesuit missionaries, were the next significant explorers, who tried to establish a more permanent missionary post further west but only got as far as Sault Ste. Marie. [2] In 1658 two French explorers, Pierre-Esprit Radisson and Médard des Groseilliers, became the first whites to circumnavigate Lake Superior by sailing south along the North Shore. When they returned, they brought a flotilla of Native Americans with fur pelts, beginning interest in the fur trade in the Lake Superior region.

Conflicts between native tribes began to escalate toward war during this period when an alliance of Anishinaabe tribes was formed and defeated the Dakota in a battle west of Sault Sainte Marie in 1662. This warfare between the tribes along Lake Superior prevented European trade in the area for several years.

In 1670, the Hudson's Bay Company was founded, which began the fur trade nonetheless. In the late 1670s, Daniel Greysolon, Sieur du Lhut, helped negotiate a more permanent peace between these tribes, thus providing safe trade across Lake Superior for the French. With this, the foundations for European settlement on the North Shore were laid. Fort Kaministiquia, around modern Thunder Bay, was established in 1683. In 1688 Jacques de Noyon became the first European to visit the present-day Boundary Waters Canoe Area region west of Lake Superior.

A war between Britain and France, followed by a sharp drop in fur prices, slowed exploration for several decades. In 1732 the French-Canadian La Vérendrye built Fort St. Pierre on Rainy Lake near the head of the Rainy River in order to gain access to the west.

The Great Hall at Grand Portage

With the eventual depletion of fur-bearing animals, the fur trade and associated settlement diminished.

When American settlers moved westward, the governments of the United States and Britain began to dispute the border between the territory that would become Minnesota and the territory which would become Ontario in future years. Many geologic surveys were taken because of these disputes, which revealed the rich mineral resources in this area. In 1854 the LaPointe Treaty surrendered all Ojibwa lands to the United States goverment.

Because of this white settlers moved into the region in order to mine the natural resources, thus beginning American settlements on the Minnesotan portion of the North Shore. Land claims were made near modern Duluth, Knife River, Beaver Bay, Buchanan, Burlington Bay, French River, Stewart River and Silver Creek. Ninety-nine fishermen had settled in northern Minnesota by 1857, when an economic panic caused most of the claims to be abandoned. In 1865 the Vermilion Lake Gold Rush brought a new wave of settlement to the North Shore.

American settlement began in earnest in 1869. When the Lake Superior & Mississippi Railroad was built, people could move across the country in days instead of months. In 1869 Duluth grew from 14 families in January to a population of 3,500 in July. Construction on the Duluth Harbor was started to allow steamboat shipping between Duluth and Buffalo, Detroit and Chicago. The town of Beaver Bay was founded in 1869 as a fishing community, and Grand Marais was founded by Henry Mayhew and Sam Howenstine in 1871. Another panic in 1873 put an end to this growth, and Duluth shrank to a population of 1,300.

In the 1880s, growth began again in Minnesota, and significant growth began for the first time in Canada. The Canadian Pacific Railway was opened in 1881 and brought a wave of settlers from the west. In Minnesota, Two Harbors was founded and became a major iron ore port and a source of labor for the inland iron mines on the North Shore. Besides mining, fishing became the other major industry of North Shore communities. In 1885, 195 commercial fishermen lived in Duluth. Duluth fish catches increased to a peak of 10,000 tons of fish caught in 1915. It has since declined. Current annual fish catches have fallen to under 1,000 tons per year.

A tourist views one of the massive 2-8-8-4 locomotives that hauled iron ore to Two Harbors. This engine is preserved in Two Harbors next to the Lake County Historical Society building (the old train depot).

In 1875 Philadelphia financier Charlemagne Tower, who owned extensive interests in the Northern Pacific Railroad, began to investigate the possibility of iron mining inland from the North Shore. (Vast quantities of banded iron formations had been deposited about 2,000 million years ago in the Animikie Group.) Although the scare of 1873 had depressed the price of iron to $5.50 per ton, by the 1880s it was back to about $9.25 per ton. Tower started acquiring land in the Vermilion Range, where ore had an iron content of 69%. Tower also acquired the rights to the Duluth Iron & Railway Co., which entitled him to 10 square miles (26 km2) of land for every mile (1.6 km) of rail built between Duluth and Agate Bay (Two Harbors), 25 miles (40 km) northeast along the shore.

Speculators bought up land at Agate Bay; the rail line was not completed until 1887, so all travel to Agate Bay was originally by steamboat. Between 1884 and 1885 two large wooden loading docks were built in the harbor for shipping iron. In 1887, when the railroad was completed, the Minnesota Iron Company owned 95.7 miles (154.0 km) of track, 26,800 acres (108 km²) of property, 13 locomotives, 340 cars, the loading docks at Two Harbors and five pit mines.

This growth attracted the interest of Henry H. Porter, a Chicago railroad owner. He bought 25,000 acres (100 km²) of land further up the North Shore than Tower’s holdings around Two Harbors and Tower, an inland mining settlement named after its founder. Porter coerced Tower into selling the Minnesota Iron Company for 8.5 million dollars. He opened Chandler Mine, Pioneer Mine, Zenith Mine, Savoy Mine and Sibley Mine between 1889 and 1899. In 1896 the iron traveling through Two Harbors exceeded 2,000,000 tons. Two Harbors steadily built more docks and replaced the wooden docks with concrete over the course of the next several decades.

Iron production continued steadily for many more decades; by the 1950s traditional iron mines had exhausted most of their resources. It had been known for many years that northern Minnesota had an ore called taconite, which could be refined into iron through a process called beneficiation. A taconite processing plant was built further north along the North Shore at Silver Bay, and it quickly became the major taconite shipping port. Minnesota taconite produces over half of the iron mined in Minnesota at the present date.

Northern Minnesota is essentially covered with one large forest. Although the potential for a lumber industry was recognized early in the course of European settlement, the distances that it would have to be shipped made it uneconomical. But as eastern forests were logged out, the lumber industry moved into Wisconsin and Minnesota.. Lumber and forest products were shipped by rail from Duluth and Superior, Wisconsin to southern and eastern mills. Because of conservation efforts, many of the forests along the North Shore are now protected from deforestation, but there is still a strong paper industry that relies on pulpwood.[ citation needed]

In 1855 when a lock system first allowed steamboats onto the lake, eastern tourists began to travel onto Lake Superior for recreational purposes. They would then canoe or be ferried from Duluth up the North Shore and would stay in hunting and fishing camps.

In the 1920s, the North Shore highway was built, which helped make the North Shore accessible by land. At the same time commercial fishermen began to go out of business as catches declined. Many of these fishermen built cabins and resorts, which were inhabited by more rich people on recreational trips. Certain exclusive clubs also bought land for resort and sport purposes. The Naniboujou Club Lodge was built to attract an exclusive clientele, and a group of Duluth businessmen, the Tettegouche Club, bought 9,346 acres (37.8 km²) of land for use as a private retreat. 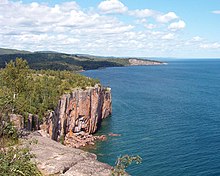 Cliffs at Palisade Head near Silver Bay, Minnesota looking northeast to Shovel Point; both were formed from lava flows from the Midcontinent Rift. [3]

The North Shore lies on the north side of the Midcontinent Rift System which ran 1,300 miles (2,000 km) northwest from southern Michigan, through what is now Lake Superior, and south-southwest into Kansas. [4] As the granitic crust was torn apart by continental drift, lava flowed out from 30–60 miles (50–100 km) under the crust and formed basalt. Tectonic forces were not strong enough to continue to separate the two sides of the continental rift; when the rifting stopped, the lava cooled and the heavy crust sank and was filled with sediment.

During recent glaciations, a large amount of the basalt and sandstone, which erode much more easily than granite, was removed by the glaciers. This formed the rough, rugged shoreline on the North Shore today. As the glaciers retreated, they left behind eroded igneous material, much of which covers the rocky beaches on the North Shore. The Wisconsin side of the basin and the bottom of the basin filled with the residue from the eroded sandstone and thus are sandy beaches today.

The melting water from the retreat of the glaciers ran into the basin and began to fill, forming the Great Lakes. The shoreline at its maximum reached over 500 feet (150 m) above its current height, and at its minimum fell to 250 feet (75 m) below its current level. When the levels of Lake Michigan and Lake Huron fell 2,000 years ago, it created rapids at Sault Sainte Marie, which restricted the release of water from Lake Superior and brought the shoreline to its present level.

The modern shoreline is composed of basalt lava flows. In the south, near Duluth, other materials, such as slate, greywacke and sandstone, are found a short distance inland; but in the north, the entire bedrock made of basalt and gabbro is exposed in patches miles from shore. When the bedrock hits the surface of the lake at a shallow enough angle, the beach is covered with washed up rocks. When it hits the lake at a steep angle, it breaks off and makes sharp cliffs ending at the lake. 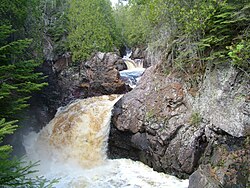 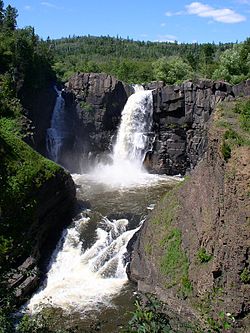 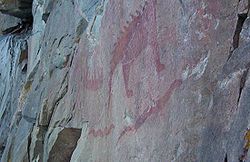 The majority of Ontario Provincial Parks are undeveloped nature reserves with no formal campgrounds or visitor centers.