Table of Contents ⇨
County in the United States
U.S. county in Minnesota

Nobles County was first occupied by the Sisseton Sioux. The first white man to set foot on the land was Joseph Nicollet who came to map out the area in 1842. Nicollet named Lake Okabena (there were two Lake Okabenas at the time), Lake Ocheda, East and West Graham Lake and the Kanaranzi Creek.

The first settlement was near Graham Lakes in 1846. Nobles County was established May 23, 1857, and organized October 27, 1870. [4] The county was named for William H. Nobles, a member of the Minnesota territorial legislature in 1854 and 1856. In Autumn 1856 he began the construction of a wagon road for the US government, crossing southwestern Minnesota and Nobles County, to extend from Fort Ridgely to South Pass in the Rocky Mountains. This work was continued in 1857 but was not completed. [5] Nobles County was created by the Minnesota Territory legislature just before the full force of the Panic of 1857 was felt. Settlers were further discouraged from coming by the Spirit Lake Massacre of 1857, where a band of Sioux murdered settlers in Spirit Lake and along the Des Moines River in Jackson and Cottonwood Counties. The few whites in the area were understandably reluctant to stay.

During the summer of 1867, a mail route was established from Blue Earth through the Graham Lakes settlement to Yankton, South Dakota. In January, a Post Office was established in each settlement. The population in the spring of 1870 was 117 and nearly doubled by fall. County Government did not start until 1870. The first railroad, the St. Paul & Sioux City Railway, was built in 1871. This later became the Chicago Northwestern Railroad, and is now operated by the Union Pacific Railroad.

In 1871, a group of men from Toledo, Ohio organized a company to locate a colony of settlers in some western county. After traveling 20,000 miles in the Midwest, they decided on Nobles County and by the spring of 1872, hundreds of people came in and took up land. Worthington was platted in 1871, [6] and became the county seat in 1873. The Worthington & Sioux Falls Railway was established in 1876. This led to rapid settlement in Rushmore, Adrian, and the western portions of the county. 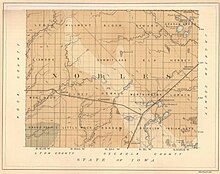 Nobles County sits atop the Buffalo Ridge, a large expanse of rolling hills in southwestern Minnesota reaching a height of 1,995' (608m) ASL. The Buffalo Ridge marks the most southerly extent of the last glaciation, and extends 60 miles (96 km) through Lincoln, Lyon, Pipestone, Murray, Rock, and Nobles counties. It is a drainage divide separating the watersheds of the Mississippi and Missouri Rivers. Because of its elevation and constant winds, Buffalo Ridge has become a major site for wind energy. Over 200 wind turbines stand along the Ridge.

Buffalo Ridge is part of the inner coteau and is the highest point of the Coteau des Prairies in Minnesota. [12] Its bedrock is formed of Cretaceous shale, sandstone and clay that lie above the pinkish-red Upper Precambrian Sioux Quartzite. [13] These units are covered in most areas by thick deposits of glacial drift, which consist of up to 800' (244m) of pre- Wisconsin age glacial till left after the glaciers receded. The inner coteau is made up of extremely stream-eroded glacial deposits of pre-Wisconsin glacial drift, which is then covered by a 6-15' (1.8-4.6m) thick deposit of a wind-blown silt called loess. [12] This covering results in the creation of an area with long, gently sloping hills. Loess is an easily eroded material, resulting in few lakes and wetlands in the inner coteau area. Loess however promotes well-established dendritic drainage networks flowing into the Missouri River and Minnesota River systems. 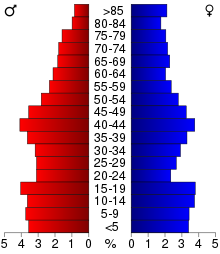 Age pyramid of county residents based on 2000 US census data

Nobles County voters have tended to vote Republican in the past several decades. In 67% of national elections since 1980 the county selected the Republican Party candidate (as of 2016).