Newton County is a county in the U.S. state of Arkansas. As of the 2010 census, the population was 8,330. [1] The county seat is Jasper. [2] Newton County is Arkansas's 46th county, formed on December 14, 1842, and named for Thomas W. Newton, an Arkansas Congressman. It is an alcohol prohibition or dry county.

Newton County residents were divided during the Civil War, serving in both the Confederate and Union armies. John Cecil, who had served as Newton County's sheriff, served as a Confederate Captain. Jasper blacksmith James R. Vanderpool (ca. 1832-1880) served as Captain of Union Company C, 1st Regiment Arkansas Infantry Volunteers, while farmer and teacher John McCoy (1820–1903) served as Captain of Union Company F, 1st Regiment Arkansas Infantry Volunteers. Many Newton County citizens served under each of these men, as well as in other units. As an example of how the war divided families, Confederate Captain Cecil's brother, Sam, served as a sergeant in Union Company D, 2nd Regiment Arkansas Cavalry Volunteers. Violence took a severe toll on the civilian population, and at one point, Captains McCoy and Vanderpool escorted 20 wagons of Unionist families from Newton County to Missouri to seek refuge. [3]

Low Gap community within the Boston Mountains along Highway 74

Newton County lies almost entirely within the rugged Boston Mountain range of the Ozark Mountains where elevations exceed 2,500 feet (760 m). The Buffalo National River, a popular destination for canoeing and recreation, runs through the county from west to east. Highway 7, which traverses the county from north to south, has been rated as one of the most scenic drives in the region. 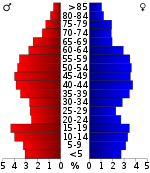 Native residents of Newton County were interviewed in 1970 for research being done by a doctoral student at the University of Arkansas in Fayetteville. A Ph.D. degree was awarded to Bethany K. Dumas in May 1971 after she completed "A Study of the Dialect of Newton County, Arkansas." Results are discussed in two of her published articles/chapters: "The Morphology of Newton County, Arkansas: An Exercise in Studying Ozark Dialect," Mid–South Folklore 3 (1975), 115–125, and "Southern Mountain English" Chapter 5 of The Workings of Language, ed. R. S. Wheeler, Westport, CT, and London: Praeger, 1999, 67-79.

The county government is a constitutional body granted specific powers by the Constitution of Arkansas and the Arkansas Code. The quorum court is the legislative branch of the county government and controls all spending and revenue collection. Representatives are called justices of the peace and are elected from county districts every even-numbered year. The number of districts in a county vary from nine to fifteen, and district boundaries are drawn by the county election commission. The Newton County Quorum Court has nine members. Presiding over quorum court meetings is the county judge, who serves as the chief operating officer of the county. The county judge is elected at-large and does not vote in quorum court business, although capable of vetoing quorum court decisions. [12] [13]

Along with adjacent Searcy County, Newton is unique among Arkansas counties in being traditionally Republican in political leanings even during the overwhelmingly Democratic " Solid South" era. This Republicanism resulted from their historical paucity of slaves, in turn created by infertile soils unsuitable for intensive cotton farming, and produced support for the Union during the Civil War.[ citation needed] These were the only two counties in Arkansas to be won by Alf Landon in 1936, [14] Wendell Willkie in 1940, Charles Evans Hughes in 1916, and even Calvin Coolidge in 1924. Since the Civil War the only Democrats to gain an absolute majority of Newton County's vote have been Franklin D. Roosevelt in 1932 and Jimmy Carter in 1976. [15] The Republican nominee has received over sixty percent in all Presidential elections from 2000 to 2016 inclusive. [16] In 2016, Newton County voted over 76 percent for Donald Trump, while Hillary Clinton received just 18 percent.

The county is in Arkansas's 1st congressional district, which from Reconstruction until 2010 sent only Democrats to the U.S. House. That year, it elected Republican Rick Crawford, who currently holds the seat as of 2014. In the Arkansas House of Representatives Newton County is represented by second-term Republican David Branscum from the 83rd (and formerly the 90th prior to 2013) district. [17] The state senator, Missy Thomas Irvin, is also a Republican, serving her second term from the 18th district. [18]

24 Hours of Horseshoe Hell (24HHH) is an annual rock-climbing competition held at Horseshoe Canyon Ranch in Newton County. [20] Using difficulty ratings based on the Yosemite Decimal System, teams of two attempt to climb as many routes as possible in 24 hours. The sandstone walls of the canyon has over 411 established routes. The event was first held in 2006, and was rated by Climbing magazine as one of the most difficult endurance events in the nation. [21] [22] 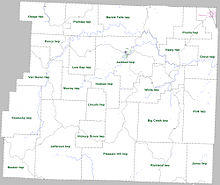 Townships in Newton County, Arkansas as of 2010

Townships in Arkansas are the divisions of a county. Each township includes unincorporated areas; some may have incorporated cities or towns within part of their boundaries. Arkansas townships have limited purposes in modern times. However, the United States Census does list Arkansas population based on townships (sometimes referred to as "county subdivisions" or "minor civil divisions"). Townships are also of value for historical purposes in terms of genealogical research. Each town or city is within one or more townships in an Arkansas county based on census maps and publications. The townships of Newton County are listed below; listed in parentheses are the cities, towns, and/or census-designated places that are fully or partially inside the township. [23] [24]

Highway 21 in Boxley Valley in the Upper Buffalo Wilderness