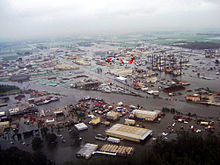 Flooding in New Iberia due to Hurricane Ike, September 2008

New Iberia is the largest city in and the parish seat of Iberia Parish, Louisiana, United States. [3] It is located 21 miles (34 kilometers) southeast of Lafayette.

New Iberia is a part of the Lafayette, Louisiana Metropolitan Statistical Area.

New Iberia dates from mid-1779, when a group of some 500 Malagueños colonists led by Lt.Col. Francisco Bouligny came up Bayou Teche and settled around Spanish Lake. In 1814, the federal government opened a post office, and it was officially known as "New Iberia," but postmarks shortly thereafter reveal that the town was being called "Nova Iberia" (with Latin for "new"). The town was incorporated as "Iberia" in 1839, but the state legislature resolved the situation in 1847, naming the town New Iberia.[ citation needed]

During the American Civil War, New Iberia was occupied by Union forces under General Nathaniel P. Banks. The soldiers spent the winter of 1862–1863 at New Iberia and, according to historian John D. Winters of Louisiana Tech University in his The Civil War in Louisiana, "found the weather each day more and more severe. The dreary days dragged by, and the men grumbled as they plowed through the freezing rain and deep mud in performing the regular routines of camp life." [5] Banks' men from New Iberia foraged for supplies in the swamps near the city. [6]

In 1868, Iberia Parish (county) was established, and New Iberia became the seat of parish government. At first, only rented space served for the courthouse, but by 1884 a new courthouse stood on a landscaped lot in downtown New Iberia, at the present-day site of Bouligny Plaza. That courthouse served Iberia Parish until 1940, when the current courthouse was built along Iberia Street, two blocks from the New Iberia downtown commercial district.

In September 2008, New Iberia was struck by Hurricane Ike, the lakes overflowed and filled the city, flooding it under several feet of dirty, brown water. [7]

New Iberia enjoys a sub-tropical climate with above average rainfall. Among the lakes is Lake Peigneur, which was formerly a 10-foot (3.0 m) deep freshwater lake until a 1980 disaster involving oil drilling and a salt mine. The lake is now a 1,300-foot (400 m) deep salt water lake, having been refilled by the Gulf of Mexico via the Delcambre Canal. There is also Lake Tasse, better known as Spanish Lake. This region has many natural features of interest, such as Avery Island, famous for its Tabasco sauce factory, deposits of rock salt, and Jungle Gardens.

This is a list of notable people from New Iberia, Louisiana. It includes people who were born/raised in, lived in, or spent portions of their lives in New Iberia, or for whom New Iberia is a significant part of their identity, as well as music groups founded in New Iberia. This list is in alphabetical order.

This is a dynamic list and may never be able to satisfy particular standards for completeness. You can help by expanding it with reliably sourced entries.