Fort Gibson Dam and Reservoir on the Grand River in Cherokee and Wagoner Counties, Oklahoma 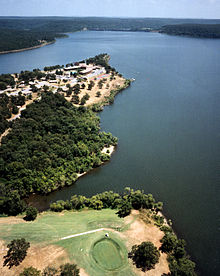 The Neosho River is a tributary of the Arkansas River in eastern Kansas and northeastern Oklahoma in the United States. Its tributaries also drain portions of Missouri and Arkansas. The river is about 463 miles (745 km) long. [4] Via the Arkansas, it is part of the Mississippi River watershed. Its name is an Osage word meaning "clear water." [5] The lower section is also known as the Grand River.

The Neosho's headwaters are in Morris County, Kansas, and it flows southeast through Kansas. In Ottawa County, Oklahoma, the river turns south-southwest for the remainder of its course through Oklahoma. It meets the Arkansas River near the city of Muskogee, about a mile downstream of the confluence of the Arkansas River and the Verdigris River. The area of convergence of the three rivers Arkansas, Verdigris and Neosho is called "Three Forks."

In Oklahoma the Neosho ends at its confluence with Spring River at Twin Bridges State Park. From that point on it is called the Grand River. The Grand River flows south to the Grand Lake.

The Neosho has been dammed at several points along its course, in most cases by the U.S. Army Corps of Engineers. In Kansas, a dam upstream of Council Grove forms Council Grove Lake, and a dam near New Strawn forms John Redmond Reservoir. There are also 12 dams in between John Redmond and the Kansas border. [6] In Oklahoma, a dam at Langley forms the Neosho's largest reservoir, the Grand Lake o' the Cherokees. A dam near Locust Grove forms Lake Hudson, (also known as Markham Ferry Reservoir), and a dam upstream of Fort Gibson forms Fort Gibson Lake.

Cities and towns along the river

According to the Geographic Names Information System, the Neosho River has also been known as: