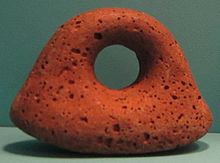 A lava rock poi pounder dated from the 18th century or earlier. (From the Honolulu Museum of Art's collection) 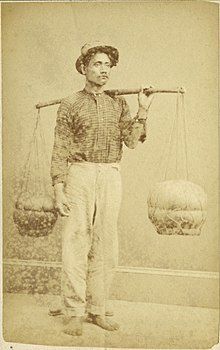 A Hawaiian poi dealer. Photograph by Menzies Dickson dated to between 1860 and 1870

Pouding taro into poi. Taro plants can be seen growing in the background below the banana leaves

Native Hawaiian cuisine is based on the traditional Hawaiian foods that predate contact with Europeans and immigration from East and Southeast Asia. The earliest Polynesian seafarers are believed to have arrived on the Hawaiian Islands in 300–500 AD. [a] Few edible plants were indigenous to Hawaii aside from a few ferns and fruits that grew at higher elevations. Various food-producing plants were introduced to the island by migrating Polynesian peoples.

Botanists and archaeologists believe that these voyagers introduced anywhere from 27 to more than 30 plants to the islands, mainly for food. [1] The most important of them was taro. [2] For centuries, taro—and the poi made from it—was the main staple of the Hawaiian diet, and it is still much loved. ‘Uala ( Sweet potatoes) and yams were also planted. The Marquesans, the first settlers from Polynesia, brought ʻulu ( breadfruit) and the Tahitians later introduced the baking banana. Settlers from Polynesia also brought coconuts and sugarcane. [3] ʻAwa ( Piper methysticum, commonly known as kava) is also a traditional food among Hawaiians. Breadfruit, sweet potato, kava and he‘e ( octopus) are associated with the four major Hawaiian gods: Kāne, Kū, Lono and Kanaloa. [4]

Fish, shellfish, and limu are abundant in Hawaiʻi. [1] Flightless birds were easy to catch and eggs from nests were also eaten. [1] Most Pacific islands had no meat animals except bats and lizards. [5]

Ancient Polynesians sailed the Pacific with pigs, chickens and dogs and introduced them to the islands. [5] Pigs were raised for religious sacrifice, and the meat was offered at altars, some of which was consumed by priests and the rest eaten in a mass celebration. [5] The early Hawaiian diet was diverse, and may have included as many as 130 different types of seafood and 230 types of sweet potatoes. [6] Some species of land and sea birds were consumed into extinction. [7]

Sea salt was a common condiment in ancient Hawaii. [8] Inamona is a traditional relish or condiment often accompanied meals and is made of roasted and mashed kukui nutmeats, and sea salt. It sometimes mixed with seaweeds [8]

Early Polynesian settlers brought along with them clothing, plants and livestock and established settlements along the coasts and larger valleys. Upon their arrival, the settlers grew kalo ( taro), maiʻa ( banana), niu ( coconut), and ʻulu ( breadfruit). Meats were eaten less often than fruits, vegetables, and seafood. Some did import and raise pua'a ( pork), moa ( chicken), and ʻīlio ( poi dog). Popular condiments included pa'akai ( salt), ground kukui nut, limu ( seaweed), and ko ( sugarcane) which was used as both a sweet and a medicine. [9] The non-native species may have caused various birds, plants and land snails to go extinct. [10] Estuaries were adapted to fishing ponds ( aquaculture). Irrigation work was also used to farm taro. [11]

Men did all of the cooking, and food for women was cooked in a separate imu; afterwards men and women ate meals separately per the ancient kapu (taboo) of separating the genders for meals. [b] This kapu was abolished in 1819 at the death of Kamehameha I by his wife Ka'ahumanu. [12] The ancient practice of cooking with the imu continues for special occasions [13] and is popular with tourists.

Hāpuʻu ʻiʻi, Hawaiian tree fern ( Cibotium menziesii) is endemic to the Hawaiian Islands and the uncoiled fronds (fiddles) are eaten boiled. The starchy core of the ferns was considered a famine food or used as pig feed. It was prepared by peeling the young fronds or placing the entire trunk with the starchy center in an ʻimu or volcanic steam vents. A saying was "He hāpuʻu ka ʻai he ai make" (If the hāpuʻu is the food, it is the food of death).

Cyanea angustifolia was eaten in times of food scarcity. It and the now endangered Cyanea platyphylla are known in Hawaiian as haha.

There is no fighting when eating from a bowl of poi. It is shared and is connected to the concept because Hāloa (Taro), the first-born son of the parents who begat the human race. Hawaiians identify strongly with kalo/taro, so much so that the Hawaiian term for family, ʻohana, is derived from the word ʻohā, the shoot or sucker which grows from the kalo corm. As young shoots grow from the corm, so people too grow from their family. [14]

Fishing, harvesting other seafood and seaweed have been an important part of Native Hawaiian cuisine. [15] Limpets, opihi, are also a traditional part of the Hawaiian diet picked off reefs at low tide. [16] 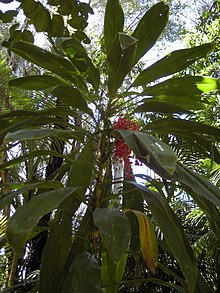 Hala, the fruit of the Pandanus tectorius tree 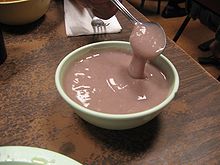 A bowl of poi showing its viscous consistency 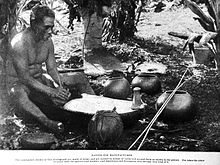 Hawaiians eating poi in a photo by Menzies Dickson circa 1870. Dickson was a pioneering photographer on the islands who captured some of the earliest images of Hawaiian people

On important occasions, a traditional ʻahaʻaina feast was held. When a woman was to have her first child, her husband started raising a pig for the ʻAhaʻaina Mawaewae feast that was celebrated for the birth of a child. Besides the pig, mullet, shrimp, crab, seaweeds and taro leaves were required for the feast. [21] The modern name for such feasts, lūʻau, was not used until 1856, replacing the Hawaiian words ʻahaʻaina and pāʻina. [22] The name lūʻau came from the name of a food always served at a ʻahaʻaina — young taro tops baked with coconut milk and chicken or octopus.

Pigs and dogs were killed by strangulation or by holding their nostrils shut in order to conserve the animal's blood. [23] Meat was prepared by flattening out the whole eviscerated animal and broiling it over hot coals, or it was spitted on sticks. [23] Large pieces of meat, such as fowl, pigs and dogs, would be typically cooked in earth ovens, or spitted over a fire during ceremonial feasts. [23] [24] Hawaiian earth ovens, known as an imu, combine roasting and steaming in a method called kālua. A pit is dug into earth and lined with volcanic rocks and other rocks that do not split when heated to a high temperature, such as granite. [25] A fire is built with embers, and when the rocks are glowing hot, the embers are removed and the foods wrapped in ti, ginger or banana leaves are put into the pit, covered with wet leaves, mats and a layer of earth. Water may be added through a bamboo tube to create steam. The intense heat from the hot rocks cooked food thoroughly — the quantity of food for several days could be cooked at once, taken out and eaten as needed, and the cover replaced to keep the remainder warm. [8] Sweet potatoes, taro, breadfruit and other vegetables were cooked in the imu, as well as fish. Saltwater eel was salted and dried before being put into the imu. [26] Chickens, pigs and dogs were put into the imu with hot rocks inserted in the abdominal cavities. [8]

Paʻina is the Hawaiian word for a meal and can also be used to refer to a party or feast. One tradition that includes paʻina is the four-month-long Makahiki ancient Hawaiian New Year festival in honor of the god Lono (referred to as the sweet potato god) of the Hawaiian religion. Makahiki includes a first phase of spiritual cleansing and making hoʻokupu offerings to the gods. The Konohiki, a class of royalty that at this time of year provided the service of tax collector, collected agricultural and aquacultural products such as pigs, taro, sweet potatoes, dry fish, kapa and mats. Some offerings were in the form of forest products such as feathers. The Hawaiian people had no money or other similar medium of exchange. The goods were offered on the altars of Lono at heiau - temples - in each district around the island. Offerings also were made at the ahu, stone altars set up at the boundary lines of each community. All war was outlawed to allow unimpeded passage of the image of Lono. The festival proceeded in a clockwise circle around the island as the image of Lono (Akua Loa, a long pole with a strip of tapa and other embellishments attached) was carried by the priests. At each ahupuaʻa (each community also is called an ahupuaʻa) the caretakers of that community presented hoʻokupu to the Lono image, a fertility god who caused things to grow and who gave plenty and prosperity to the islands. The second phase of celebration includes: hula dancing, of sports (boxing, wrestling, Hawaiian lava sledding, javelin marksmanship, bowling, surfing, canoe races, relays, and swimming), of singing and of feasting. [27] In the third phase, the waʻa ʻauhau — tax canoe — was loaded with hoʻokupu and taken out to sea where it was set adrift as a gift to Lono. [28] At the end of the Makahiki festival, the chief would go off shore in a canoe. When he came back in he stepped on shore and a group of warriors threw spears at him. He had to deflect or parry the spears to prove his worthiness to continue to rule.

Native Hawaiian dishes have evolved and been integrated into contemporary fusion cuisine. [29] Apart from lūʻau for tourists, native Hawaiian cuisine is less common than other ethnic cuisine in parts of Hawaii, but restaurants such as Helena's Hawaiian Food and Ono Hawaiian Foods specialize in traditional Hawaiian food. [16]