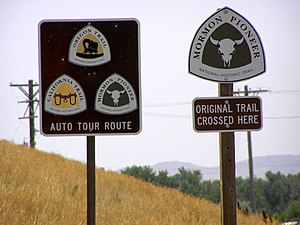 Signs used along the historic and scenic trails to mark the modern roads and significant points.

The Act created a series of National trails "to promote the preservation of, public access to, travel within, and enjoyment and appreciation of the open-air, outdoor areas and historic resources of the Nation." Specifically, the Act authorized three types of trails: the National Scenic Trails, National Recreation Trails and connecting-and-side trails. The 1968 Act also created two national scenic trails: the Appalachian and the Pacific Crest; and requested that an additional fourteen trail routes be studied for possible inclusion.

In 1978, as a result of the study of trails that were most significant for their historic associations, a fourth category of trail was added: the National Historic Trails. Since 1968, over forty trail routes have been studied for inclusion in the system. Of these studied trails, twenty-one have been established as part of the system. Today, the National Trails System consists of 30 National Scenic and Historic Trails and over 1,000 National Recreation Trail and two connecting-and-side trails, with a total length of more than 50,000 miles (80,000 km). These National Trails are more than just for hiking, many are also open for horseback riding, mountain biking, camping and/or scenic driving.

As Congressionally established long-distance trails, each one is administered by a federal agency, either the Bureau of Land Management, United States Forest Service, or National Park Service. Two of the trails are jointly administered by the BLM and the NPS. Occasionally, these agencies acquire lands to protect key sites, resources and viewsheds. More often than not, they work in partnership with the states, local units of government, land trusts and private landowners, to protect lands and structures along these trails, enabling them to be accessible to the public. National Recreation Trails and connecting-and-side trails do not require Congressional action, but are recognized by actions of the Secretary of the Interior or the Secretary of Agriculture. All of the National Trails are supported by private non-profit organizations that work with the various federal agencies under the Partnership for the National Trails System (PNTS).

National Scenic Trails are established to provide access to spectacular natural beauty and to allow the pursuit of healthy outdoor recreation. The National Scenic Trail system provides access to the crest of the Appalachian Mountains in the east, on the Appalachian Trail, to the Rocky Mountains of the west on the Continental Divide Trail. These provide access to viewing the subtle beauties of the southern wetlands and Gulf Coast on the Florida Trail, wandering the North Woods from New York to North Dakota on the North Country Trail, or experiencing the vast diversity of landscapes of the southwest on the Arizona National Scenic Trail. Of the eleven national scenic trails, [3] Appalachian, Natchez Trace, and Potomac Heritage are official units of the NPS.

National Historic Trails are designated to protect the remains of significant overland or water routes to reflect the history of the nation. They represent the earliest travels across the continent on the Juan Bautista de Anza National Historic Trail; the nation's struggle for independence on the Overmountain Victory National Historic Trail; epic migrations on the Mormon & Oregon Trails and the development of continental commerce on the Santa Fe Trail. They also commemorate the forced displacement and hardships of the Native Americans, on the Trail of Tears. There are 19 Historic Trails. [6] Most of them are scenic routes instead of non-motorized trails.

National Connecting and Side Trails

The act also established a category of trails known as connecting and side trails. To date, only two national side trails have been designated, both in 1990: The Timms Hill Trail, which connects the Ice Age Trail to Wisconsin's highest point, Timms Hill, and the 86-mile Anvik Connector, which joins the Iditarod Trail to the village of Anvik, Alaska. [8]

The first National Geologic Trail was established by the Omnibus Public Land Management Act of 2009.