The Mykonos Bienniale is held every odd year at the start of the summer on the Greek island of Mykonos. Originally created by Lydia Venieri, [1] the biennale does not consider itself in the standard form but that of a symposium where art and philosophy meet to work with the energy of island. [2]

For one week at the end of June or the beginning of July, the island of Mykonos, hosts an extensive range of artworks, projects, and a program of events. The biennial commissions leading and emerging artists to make and present permanent and temporary public artworks, as well as long-term community-based projects. These newly commissioned and existing artworks and projects are presented in diverse locations, including unusual public spaces including windmills, pirate houses, warehouses, schools and churches, as well as the city’s galleries, museums, and cultural venues. The town hall, School of Fine Arts and the other organizations in Mykonos provide context for the presentation of contemporary art and culture. [3] 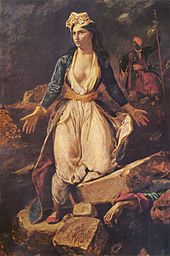 Greece on the Ruins of Missolonghi (1826), Musée des Beaux-Arts, Bordeaux

The 5th 2021 Mykonos Biennale theme is Eighteen Twenty-One and will exhibit works and installations by various artists as well as international short films during the first week of September. [4]

In the fifteenth century, the Ottomans occupied Byzantium, extinguishing the last breath of ancient Greek culture. At the same time, European empires, with the same ruthless, barbaric criminal testosterone, were destroying America's ancient civilizations. Their purpose was to exploit the Earth and reign through dark and sick domination. In the year 1821, Greece [5][ circular reference], Peru, Costa Rica, El Salvador, Guatemala, Honduras, Nicaragua, Mexico, Panama, and the Dominican Republic, [6] attained their independence [7][ circular reference] [8][ circular reference]. It was the era of romance where the revolution was a celebration, the war was love, blood was art.
Human memory was filled with heroes, imagination with allegories of great ideas, and the Earth spoke the language of humanity directly to people's hearts.
The fifth Mykonos Biennale honors Earth with its theme "1821", the year of revolution. Our planet, a living organism with her own wise will, coordinated her power and drove liberation through her bowels into the hearts of the people and shook the chains of tyranny.

The 4th 2019 Mykonos Biennale theme is Apathia and will exhibit works and installations by various artists as well as international short films during the first week of September. [10]

Time has aged, fashion repeats itself and the future looks nostalgic. With order globalism has created a new culture, excessively controlled, unprotected and depressed.
Ambition for power and money floats without substance like a bored familiar junkie who has abused everyone and everything. Ancient cities, and treasures of nature disappear. People and animals are abused and all this in a world that is educated with democratic principles and religions touting love.
The mind refuses to understand and the repugnant visions accumulate in the bowels of existence. A Pandemic of indigestion overcasts humanity. This serenity is not reminiscent peace. Its [ sic] an uncomfortable silence, a charged stillness. It is the Silence of the Lambs. Is it love that gives them the power to survive the bloody centuries? Their healing look gifts forgiveness and they who feels it know the answer.
Lydia Venieri, Havana, 2018 [11] 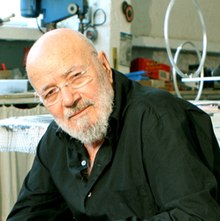 The 3rd Mykonos Biennale theme was Trans Allegoria and exhibited works and installations by various artists as well as international short films during the first week of September. [23]Allegories are symbolic figures which identify ideas and give to the abstraction a face, an expression, a position, a costume which reveals the meaning. Victory has wings, Death is a skeleton with scythe, when Spring is surrounded by flowers. The Allegory can freeze the temporality of an idea, like the gold fleece, the holy grail, the “immortal" water, or the Spring of Youth.


The Greek mythology humanizes everything, the muse, the grace, the winds. The Gods give form and behavior to all the main powers of the universe. In the Greek national anthem Freedom, exhausted, poor but full of courage lives her life of a constant struggle. An empire holds a specter and democracy wears on her head laurel leaves, war wears black and red symboling ash and blood. But what happens when a symbolism goes beyond the extreme of its meaning.


The title of the Mykonos Biennale 2017 is Trans-Allegoria. It raises (and answers) the question of the capacity of Art to initiates, introduce and captivate. Art which transforms energy into creation and creation into life.
The saga of the Great Ideas, at the transcendental Island that changes everyone into something new, something that discovers only in place.
[24]

Participating Philosophers in A PHILOSOPHICAL MARATHON [29]

The 2nd Mykonos Biennale takes place from July 2 through 7 2015, showing works and installations by various artists as well as international short films. [31]

The festival gave out the Golden Pelican Award to selected short films screening in competition:

June 21 through 24, the inaugural Mykonos Biennale took place at the heart of the Greek Cyclades islands. Lydia Venieri, [40] a New York-based Greek artist, curated the core exhibition under the banner 'Crisis and Paganism'. Gallerists, young artists, locals and, of course, tourists convened for a series of happenings where poetry and dance, along with suitably Dionysian amounts of food and wine, combined in a part-sacred, part-pagan voyage around the party-worn alleys of Mykonos and the deserted ruins of nearby Delos. Venieri's stated intention was to commit "an art crime" in Greece, a country that has, in Europe at least, lately been synonymous with social suffering. Her ideas seemed to suggest that the currently embattled Greeks know how to sustain their ancient values and confront their fears through gatherings and dancing. [41]

The venues of the Mykonos Biennale are located in many strategic points to initiate the visitor into the cultural inheritance of the island. The contemporary and international art works will blend with traditional culture in a haunted dialog hosted by the ghost of the past creating together Historical Time.

The Windmills Nobuhiro Ishihara - Installation: Dragon is reborn as a Cetus κητος from the Japanese to the Greek mythology. Lucas Samaras - Video installation in the windmill.

Delos Alternative Baptism, a performance by Lydia Venieri and Adonis Volanakis accompanied by the music of Dimitris Vassilakis and the Sylvia Macci Dance Group. Lydia Venieri performed Words about Women by Betty Tompkins.

Venieri House, Ano Mera The Mystic Party with music by Michalis Kounenis and Lefteris Sikinotis, and dance performances: The Last Supper by Lydia Venieri performed by the Dance Group of Sylvia Macci and Manage á Trois performed by Andonis Volonakis and the Flower Girls.