Mount Chocorua ( IPA: /ʃʌˈkɔʊˌɹwə/) is a 3,490 ft (1,060 m) mountain in the White Mountains of New Hampshire, the easternmost peak of the Sandwich Range. Although the mountain is not outstanding for its elevation, it is very rugged and has excellent views of the surrounding lakes, mountains, and forests. Mount Chocorua's bare summit can be seen from almost every direction and identified from many points throughout central New Hampshire and western Maine. Many hiking trails ascend the mountain. Scenic Chocorua Lake lies directly to the south.

Mount Chocorua is in the town of Albany and is the easternmost peak of the Sandwich Range in New Hampshire's White Mountain National Forest. The Sandwich Range is located north of the Lakes Region and south of the Kancamagus Highway. The range extends about 30 miles (50 km) east-west from Conway on the Saco River to Campton on the Pemigewasset.

Chocorua's summit is a picturesque rocky cone, and the mountain is purported to be one of the most photographed in the world. [3] The view from Chocorua Lake, which often casts a reflection of the mountaintop, was chosen to represent the White Mountain National Forest on a quarter issued by the U.S. Mint in 2013 as part of its America the Beautiful coin series. [4] 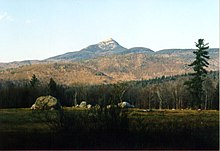 Although Mount Chocorua is under 3,500 feet (1,100 m) in elevation, its bare and rocky summit commands excellent views in all directions. There are many trails up the mountain, and they can be quite crowded during the summer months. Especially popular are the Piper Trail (4.2 miles (6.8 km) each way from the east), the Champney Falls Trail (from the north), and the Liberty Trail (from the southwest). Trails on the southeastern section of the mountain, as well as trails on Mount Paugus immediately to the west of Chocorua, are maintained by the Chocorua Mountain Club, an all-volunteer crew since 1908. [6] 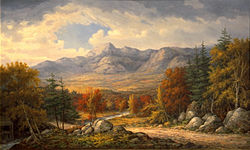 The Chocorua legend tells of a Native American prophet or chief, Chocorua, who is supposed to have lived near the mountain at the dawn of white settlement, although no authentic records of his life are known to exist. The usual story—much of it drawn from a short work of fiction by Lydia Maria Child [7]—is that in about 1720 Chocorua was on friendly terms with settlers and in particular the Campbell family that had a home in the valley now called Tamworth. Chocorua was called away and left his son in the care of the Campbell family. The boy found and drank a poison that Mr. Campbell had made to eliminate troublesome foxes, and Chocorua returned to find his son had died. Chocorua, distraught with grief, pledged revenge on the family. Shortly thereafter, Mr. Campbell returned home one afternoon to find his wife and children had been slain. Campbell suspected Chocorua and pursued him up the mountain. Chocorua was wounded by a shot from Campbell's rifle and, uttering a curse upon the white settlers, he leaped from the summit to his death.

There are at least three other versions of the legend of Chocorua. One is that Chocorua simply fell from a high rock on the mountain while hunting. A second is the white settlers pursued Chocorua up the mountain after an Indian massacre, and he leaped to his death. The third is that all the white settlers pursued him with guns, pitchforks, and torches. As Chocorua reached the top, the settlers decided to torch the remaining trees and in doing so they burned and exposed the topsoil of the last 1,270 feet (390 m). As the flames drew closer to Chocorua, he cursed the white men and leaped to his death. 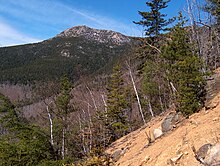 The east face of Mount Chocorua from Carter Ledge

Although the exact words of Chocorua's curse (or even if there was a curse) are not known, it has been reported (Mudge, page 34) to be as follows.

"May the Great Spirit curse you when he speaks in the clouds and his words are fire! Lightning blast your crops! Wind and fire destroy your homes! The Evil One breathe death on your cattle! Panthers howl and wolves fatten on your bones!"

Another version appears in the story "Chocorua's Curse", by Lydia Maria Child, contained in The Token (1830):

"A curse upon ye, white men! May the Great Spirit curse ye when he speaks in the clouds, and his words are fire! Chocorua had a son — and ye killed him while the sky looked bright! Lightning, blast your crops! Wind and fire destroy your dwellings! The Evil Spirit breathe death upon your cattle! Your graves lie in the war path of the Indian! Panthers howl, and wolves fatten over your bones! Chocorua goes to the Great Spirit — his curse stays with the white men!"

"In terms of the broader history of American art, no mountain has figured more prominently in the representation of the national landscape. Without exception, Chocorua has been more frequently depicted than any other peak..."

Early 18th century painters of Chocorua included Thomas Cole, who used the mountain again and again in his paintings as his vision of America and the human experience evolved over his lifetime. [10] Cole is considered a founder of the Hudson River School of American artists, which to a considerable extent overlapped with the "White Mountain School" of painters. [11]

Among the most notable artists who have painted in the White Mountains was John Frederick Kensett (1816–1872). A painter of the Hudson River School, his Mount Chocorua (1864–66) typifies American Luminism. This important art movement, containing a transcendental realism of the sublime, incorporates an inner illumination of an almost spiritual light (color), expressive geometric effects of composition (space), and the isolation of the American wilderness setting (silence).

Wallace Stevens (1879–1955) mentions Mount Chocorua in stanza XXI of his poem "The Man with the Blue Guitar". It is also the subject of his poem "Chocorua To Its Neighbor".

Ezra Pound mentions Chocorua at least twice in the Pisan Cantos: "...For the purity of the air on Chocorua / in a land of maple..."

Most of the events in John Bellairs' novel The Mummy, the Will, and the Crypt happen near this mountain.

Looking south from the summit