From Wikipedia
https://en.wikipedia.org/wiki/Mother_Serbia Jump to search
National personification of Serbia
For other uses, see Serbia (disambiguation). 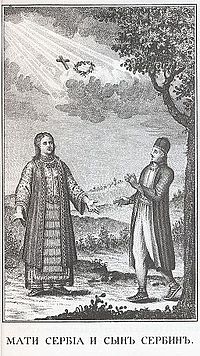 The territories inhabited by ethnic Serbs outside Serbia can be represented as the children of Mother Serbia. [3] Serbia may also be described as a daughter of Mother Serbia, alongside other Serb territories, as in Dragoslav Knežević's poem Mother Serbia: "One sister younger than the older Montenegro and Serbia, In peacetime and in war Krajina joins the Serbian flock". [3]

On February 24, 1874, the "Serbian Liberation Committee for the Sanjak of Niš", known simply as the Niš Committee, was founded by local notables. Orthodox priest Petar Ikonomović swore Oath on the Christian cross and Gospel, reminiscent of the Orašac Assembly (1804). [5] Ikonomović said:

So together, brothers, and the Almighty shall help us all in his mercy, and soon permit us to weave the triumphal flag of our only faithful IV Obrenović on the Niš fortification. Hooray! Hooray! Hooray! Long live our beloved knightly Prince Milan M. Obrenović IV. Long live Mother Serbia!

She [Serbia] sacrificed hundreds of thousands of her best sons, gave up her name, flag, existence, and eventually the blood of her king. But still they aren't satisfied and want more, they want to kill her spirit, rip out her heart, wipe out every trace of her, but this will never be! Mother Serbia will give more sacrifices, take more blows for the good of the King and our fatherland Yugoslavia, but she will endure.

— President of the Serbian women organisation "Dobrotvorna Zadruga Srpkinja" in Sarajevo, during the inter-war period. [7] 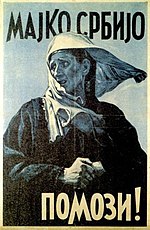 The propaganda of the Serbian puppet Government of National Salvation included promoting Milan Nedić as "Mother of the Serbs", claiming that he cared and shielded the Serbs. [9]

The expression was used during the Yugoslav Wars, referring to Mother Serbia's children in the west (outside Serbia and Montenegro) as the Republic of Serbian Krajina and Republika Srpska.[ citation needed]

Milan Martić, President of the Republic of Serbian Krajina (RSK), argued, after the fall of RSK ( Operation Storm), that "the people felt they had been deceived and abandoned by mother Serbia" for not protecting RSK. [10]

This list is incomplete; you can help by adding missing items with reliable sources.

Statue of Mother Serbia at the top of the building of the Government of Serbia.