Occupying only 621 square miles (161,000 ha), Monroe County is the 22nd smallest county in Arkansas. As of the 2010 Census, the county's population is 8,149 people in 4,455 households. [2] Based on population, the county is the fifth-smallest county of the 75 in Arkansas. [3] Located in the Arkansas Delta, the county is largely flat with fertile soils. Historically covered in forest, bayous, swamps, and grasslands, the area was cleared for agriculture by early European-American settlers who used enslaved African Americans to do the work and to cultivate cotton. It is drained by the Cache River, Bayou DeView, and the White River. Three large protected areas preserve old growth bald cypress forest, sloughs and wildlife habitat in the county: Cache River National Wildlife Refuge (NWR), Dagmar Wildlife Management Area and White River NWR and provide places for hunting and fishing.

Interstate 40 is the only Interstate highway in Monroe County, crossing the county from east to west through Brinkley, the largest city. The county also has three United States highways ( U.S. Route 49 [US 49], US 70, and US 79) and twelve Arkansas state highways run in the county. A Union Pacific Railroad line crosses the county from southwest to northeast. [4] 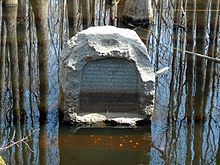 Marker to commemorate the point at which a national survey began of lands in this area, in order to allocate lands of the Louisiana Purchase to veterans of the War of 1812.

Shortly after the United States had completed the Louisiana Purchase, officials began to survey the territory at a site near the intersection of Monroe, Phillips, and Lee counties. From forested wetlands in what would become southern Monroe County, approximately 900,000 square miles (2,300,000 km2) of land would be explored after President James Madison commissioned a survey of the purchase area. The point was commemorated in 1961 by the Arkansas General Assembly as part of Louisiana Purchase State Park.

Settlement in Monroe County began when Dedrick Pike settled in 1816 where the Cache River enters the White River. [5] The settlement was named Mouth of the Cache, and a post office by that name was opened years later. The community renamed itself Clarendon in 1824 in honor of the Earl of Clarendon. Monroe County was established under the Arkansas territorial legislature in 1829, and the county seat was established at Lawrenceville, where a jail and courthouse were erected. A ferry across the White River was founded in 1836.

In 1857 the county seat was moved to Clarendon, Arkansas. The new brick courthouse was nearly finished by the outbreak of the American Civil War in 1861. The county sent five units into Confederate service. After Union troops captured Clarendon in 1863, they destroyed the small city. The Union had completely dismantled the brick courthouse and shipped the bricks to De Valls Bluff. [6]

After the war, during Reconstruction, there was a high level of violence by insurgent whites seeking to suppress the rights of freedmen and to keep them from voting. After Republican Congressman James M. Hinds was murdered by the Ku Klux Klan in Monroe County in October, 1868, Governor Powell Clayton established martial law in ten counties, including Monroe County, as the attacks and murders were out of control. Four military districts were operated for four years in an effort to suppress guerrilla insurgency by white paramilitary groups, such as the Ku Klux Klan and others. They continued to challenge enfranchisement of blacks and the increasing power of Republicans in the county. The Monroe County Sun newspaper was established in 1876. [7]

Violence continued after Reconstruction, when Democrats had regained control of the state legislature. Whites struggled to re-establish white supremacy, by violence and intimidation of black Republican voters. At the turn of the century, the state legislature passed measures that effectively disenfranchised most blacks for decades. The Equal Justice Initiative reported in 2015 that the county had 12 lynchings of African Americans from 1877-1950, [8] most in the decades near the turn of the 20th century. This was the fourth-highest of any county in the state. [8] To escape the violence, thousands of African Americans left the state in the Great Migration to northern and western cities, especially after 1940.

Mechanization of farming and industrial-scale agriculture have decreased the need for workers. The rural county has continued to lose population because of the lack of work opportunities. There has been a decrease in population every decade since 1940.

The county is located in the Arkansas Delta, one of the six primary geographic regions of Arkansas. The Arkansas Delta is a subregion of the Mississippi Alluvial Plain, which is a flat area consisting of rich, fertile sediment deposits from the Mississippi River between Louisiana and Illinois. Large portions of Monroe County are also within the Grand Prairie, a subdivision of the Arkansas Delta known today for rice farming and aquaculture. According to the U.S. Census Bureau, the county has a total area of 621 square miles (1,610 km2), of which 607 square miles (1,570 km2) is land and 14 square miles (36 km2) (2.3%) is water. [9]

Prior to settlement, Monroe County was densely forested, with bayous, sloughs, and swamps crossing the land. Seeking to take advantage of the area's fertile soils, settlers cleared the land to better suit row crops. [10] Although some swampland has been preserved in the conservation areas like the Cache River NWR and White River NWR, and some former farmland has undergone reforestation, the majority (52 percent) of the county remains in cultivation. [Note 1] Another large land use in Monroe County is the Cache River NWR and White River NWR, owned by the United States Fish and Wildlife Service.

Water is an extremely important part of Monroe County's geography, history, economy, and culture. The many rivers, streams, ditches, sloughs and bayous crossing the county have featured prominently since prehistoric times. Native American tribes settled near them and peoples such as the Quapaw constructed burial mounds at Indian Bay in extreme southern Monroe County (today preserved as Baytown Site). [10]

Europeans who settled in the county also used the White River to navigate through the area and trade. Control of the White River lead to military action in the county during the Civil War, including a gunboat battle at Clarendon in 1864. The Flood of 1927 damaged much of the county's settlements along the White, and inundated Clarendon when the levees protecting the city failed on April 20. Conservation efforts by leaders in the county resulted in the creation of federal and state protected areas around the Cache and White rivers, to protect wetlands that could absorb flooding, beginning in 1935. These have been expanded to the current day, as engineers understand more about the positive role of wetlands in floodplain ecology.

The White River, one of Arkansas's most important rivers, is the county's major hydrologic features. The White forms the southwestern boundary of the county with Arkansas County. The Cache River runs on the west side of Monroe County, partially forming its border with Prairie County. Both the Cache River and Roc Roe Bayou empty into the White near Clarendon. Bayou De View runs through the north part of the county and meets the Cache north of Dobbs Landing. [4]

The Monroe County Courthouse in Clarendon is the seat of county government
See also: Government of Arkansas, County judge, and Quorum Court

The county government is a constitutional body granted specific powers by the Constitution of Arkansas and the Arkansas Code. The quorum court is the legislative branch of the county government and controls all spending and revenue collection. Representatives are called justices of the peace and are elected from county districts every even-numbered year. The number of districts in a county vary from nine to fifteen, and district boundaries are drawn by the county election commission. The Monroe County Quorum Court has nine members. Presiding over quorum court meetings is the county judge, who serves as the chief operating officer of the county. The county judge is elected at-large and does not vote in quorum court business, although capable of vetoing quorum court decisions. [20] [21]

A portion of Monroe County is represented in the Arkansas State Senate by the Republican Ronald R. Caldwell, a real estate businessman from Wynne in Cross County. The state representative from Monroe County is a Democrat, Marshall Wright, a lawyer from Forrest City in St. Francis County.

Townships in Arkansas are the divisions of a county. Each township includes unincorporated areas; some may have incorporated cities or towns within part of their boundaries. Arkansas townships have limited purposes in modern times. However, the United States Census does list Arkansas population based on townships (sometimes referred to as "county subdivisions" or "minor civil divisions"). Townships are also of value for historical purposes in terms of genealogical research. Each town or city is within one or more townships in an Arkansas county based on census maps and publications. The townships of Monroe County are listed below; listed in parentheses are the cities, towns, and/or census-designated places that are fully or partially inside the township. [23] [24]