Mobile County ( /moʊˈbiːl/ moh-BEEL) is a county located in the southwestern corner of the U.S. state of Alabama. It is the second most-populous county in the state after Jefferson County. As of the 2010 census, its population was 412,992. [2] Its county seat is Mobile, which was founded as a deepwater port on the Mobile River. The only such port in Alabama, it has long been integral to the economy for providing access to inland waterways as well as the Gulf of Mexico. [3]

The city, river, and county were named in honor of Maubila, a village of the paramount chief Tuskaloosa of the regional Mississippian culture. In 1540 he arranged an ambush of soldiers of Hernando de Soto's expedition in an effort to expel them from the territory. The Spaniards were armed with guns and killed many of the tribe. Today Mobile County comprises the Mobile, Alabama Metropolitan Statistical Area.

The northern border of Mobile County and southern area of neighboring Washington County constitute the homeland of the state-recognized tribe of MOWA Band of Choctaw Indians, descendants of Choctaw and Creek who stayed in this area during the period of Indian Removal. They have organized to preserve their culture and language. They were the first of nine tribes to be recognized by the state.

This area was occupied for thousands of years by varying cultures of indigenous peoples. At the time of Spanish expeditions in the early 16th century, it was part of the territory of the Mississippian culture, which constructed major earthwork mounds. It was ruled by the paramount chief Tuskaloosa.

The historic Choctaw emerged somewhat later, and are believed to be descendants of those earlier peoples. They occupied this area along what early French traders and colonists called the Mobile River. They also founded the settlement of Mobile on the river and bay in the early eighteenth century.

The British took over the territory in 1763 (along with other French territories east of the Mississippi River) after defeating the French in the Seven Years' War. During the American Revolutionary War, it came under Spanish rule as part of Spanish Florida. Spain ceded the territory to the United States after the War of 1812.

In the 1830s, the United States forced the removal of most of the Native American tribes in the area under President Andrew Jackson's policy and an act of Congress to relocate them to Indian Territory west of the Mississippi River. Many of those who remained continued their culture, and took refuge in the swamps in the border area between Mobile and Washington counties. Since the late 20th century, several tribes have reorganized and gained state recognition. Among those is the MOWA Band of Choctaw Indians, which was recognized as a tribe in 1979 by the state. The people have long been based in this area of the former Choctaw homeland, along the northern border of Mobile County and the southern border of Washington County.

After more than a century of European settlement, beginning with French colonists, Mobile County was organized by the state legislature and the proclamation of Governor Holmes of the Mississippi Territory on December 18, 1812. [1] When Mississippi was separated and admitted as a state on December 10, 1817, after adopting its constitution on August 15, 1817, Mobile County became part of what was called the Alabama Territory. Two years later, the county became part of the state of Alabama, granted statehood on December 14, 1819. [4] [5]

The city of Mobile, first settled by French colonists in the early 18th century as part of La Louisiane, was designated as the county seat from the early days of the county. [1] Both the county and city derive their name from Fort Louis de la Mobile, a French fortification established (near present-day Axis, Alabama) in 1702. The word "Mobile" is believed to stem from a Choctaw word for "paddlers". [1] The area was occupied by French colonists from 1702–1763, and their influence has been strong in the city. It was ruled by the British from 1763–1780, when more American colonists began to enter the territory; and controlled by the Spanish from 1780-1813.

At the end of the War of 1812, the United States took over the territory. At that time, new settlers were being attracted to the land, eager to develop short-staple cotton in the uplands area. Invention of the cotton gin made processing of this type of cotton profitable, stimulating wholesale development of new cotton plantations in the Black Belt during the antebellum years. Mobile developed as a major deepwater port; in the nineteenth century, cotton was its major export.

There were nine documented lynchings in Mobile from 1891 to 1981. 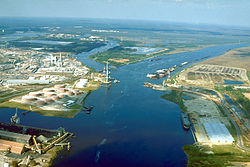 Aerial view of the Mobile River at its confluence with Chickasaw Creek. This photograph was taken around 1990, during construction of the Cochrane-Africatown bridge carrying U.S. Route 90 across the river.

According to the 2010 United States Census, the population of the county comprised the following racial and ethnic groups: 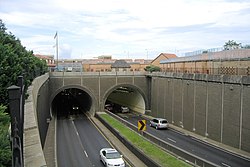 As of January 2014) Mobile County Commissioners are:

Mobile County is also the home of the University of South Alabama (USA), a public research university divided into ten colleges, including one of Alabama's two state-supported medical schools. USA has an enrollment of over 16,000 students and employs more than 6,000 faculty, administrators, and support staff.

During the late 20th century, white conservatives left the Democratic Party for the Republican Party. In that same period, as African Americans regained their ability to exercise the franchise after passage of the 1965 Voting Rights Act, they tended to support the national Democratic Party.

In the 2008 presidential election, Mobile County cast the majority of its votes for the Republican candidate John McCain. He won 54% of the vote and 98,049 votes. Democrat Barack Obama received 45% of the vote and 82,181 votes. Other candidates won 1% of the vote. [23]