The Missouri National Guard (1808-present) is a component of the Missouri Department of Public Safety and the National Guard of the United States. It is composed of Army and Air National Guard units. Mike Parson, Governor of Missouri, is Commander in Chief. [1] The headquarters is in Jefferson City, Missouri. 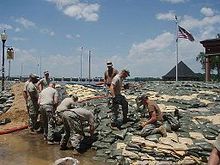 For much of the final decades of the twentieth century, National Guard personnel typically served " One weekend a month, two weeks a year", with a portion working for the Guard in a full-time capacity. The current forces formation plans of the US Army call for the typical National Guard unit (or National Guardsman) to serve one year of active duty for every three years of service. More specifically, current United States Department of Defense policy is that no Guardsman will be involuntarily activated for a total of more than 24 months (cumulative) in one six-year enlistment period (this policy is due to change 1 August 2007, the new policy states that soldiers will be given 24 months between deployments of no more than 24 months, individual states have differing policies).

In December 1989, a contingent of 22 Military Policemen from the 1138th Military Police Company was in Panama on a two-week annual training when " Operation Just Cause" commenced. The MPs, who specialized in enemy prisoner of war operations, augmented the active duty force at Fort Clayton, taking enemy mortar and artillery fire when the invasion began. While serving in combat, the unit set up and operated the Empire Range EPW camp. The Missouri National Guard was the first National Guard unit to be called into active service since the end of the Vietnam War.

The 1138th was called upon once again to serve after the Invasion of Kuwait the following year. It was one of the first Guard units placed on alert status in August, 1990 but did not deploy until December, 1990. The Missouri Guard was the first Enemy Prisoner of War (EPW) unit to deploy as part of the 400th MP Battalion. Eventually it set up and operated the 301st EPW Camp, near the Saudi Arabian city of Hafar Al-Batin (Hotel 301). It returned to West Plains, Missouri in May 1991 with a hero's welcome.

The 135th Field Artillery Brigade appears to have been disbanded between 2008 and 2011.

In 2012, Missouri organized the Missouri State Defense Force to serve as Missouri's official state defense force and to augment the Missouri National Guard during stateside missions. [2]

On August 18, 2014, after violent clashes occurred during an imposed curfew in Ferguson, Missouri in the aftermath of the fatal police shooting of a resident of Ferguson, Missouri Governor Jay Nixon issued an executive order calling in the National Guard to "help restore peace and order and to protect the citizens of Ferguson." [3]

The Missouri Air National Guard provides airmen and units since 22 August 1946 to meet the military and civil objectives of the Governor of Missouri and the President of the United States. Among those who have served in the "MOGuard" is Charles Lindbergh. [8]

The Missouri Air National Guard is composed of the following units: