Midland is a city in the U.S. state of Michigan in the Tri-Cities region of Central Michigan. It is the county seat of Midland County. [6] The city's population was 41,701 as of the 2019 census estimate. It is the principal city of the Midland Micropolitan Statistical Area, part of the larger Saginaw-Midland-Bay City Combined Statistical Area.

By the late 1820s, Midland was established as a fur trading post of the American Fur Company supervised by the post at Saginaw. Here agents purchased furs from Ojibwe trappers. The Campau family of Detroit operated an independent trading post at this location in the late 1820s. [7]

Dow Chemical Company was founded in Midland in 1897, and its world headquarters are still located there. Through the influence of a Dow Chemical plant opening in Handa, Aichi, Japan, Midland and Handa have become sister cities. [8] Dow Corning was also headquartered in Midland.

In 1969 the city unilaterally defined a Midland Urban Growth Area (MUGA), which at the time was a territory two-miles around the city limits of Midland in an attempt to control urban sprawl. [9] The central policy was that as the only capable supplier of drinking water, the city would provide water services to communities outside the MUGA such as the nearby village of Sanford, but would not provide water services to the area within the MUGA without annexation to the city of Midland thus controlling most of the growth in the county. Since 1991 however, the policy has since been revised with a series of Urban Cooperation Act Agreements with surrounding townships which has allowed case-by-case redrawings of the MUGA line to allow Midland to sell water to the surrounding townships without annexation. [9]

On May 19, 2020, the Sanford Dam and Edenville Dam collapsed, prompting an evacuation of 10,000 Midland residents. [10] Governor Gretchen Whitmer declared a state of emergency, predicting that Midland would be covered in nine feet of water within 12–15 hours and urging residents to seek shelter with family and friends, or at several emergency shelters. [10]

While the vast majority of the city exists within Midland County, a small portion of the city extends into Bay County. Most of the city's area is incorporated from Midland Township.

There were 17,506 households of which 30.4% had children under the age of 18 living with them, 48.1% were married couples living together, 9.8% had a female householder with no husband present, 3.5% had a male householder with no wife present, and 38.5% were non-families. 31.8% of all households were made up of individuals and 12.8% had someone living alone who was 65 years of age or older. The average household size was 2.33 and the average family size was 2.94.

There were 16,743 households out of which 33.2% had children under the age of 18 living with them, 54.4% were married couples living together, 8.7% had a female householder with no husband present, and 34.3% were non-families. 28.6% of all households were made up of individuals and 11.4% had someone living alone who was 65 years of age or older. The average household size was 2.42 and the average family size was 3.00.

The city's major shopping district is located north of town, on Eastman Avenue near US-10. There are several Big-box stores located here, as well as the Midland Mall, which includes Barnes & Noble, Target, and Dunhams. Midland also has a downtown on Main Street which includes local restaurants, artist co-ops, and local retail.

There are four recognized Michigan historical markers in the city. [13] 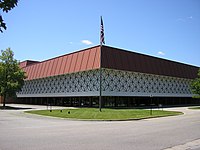 Midland Center for the Arts

Midland has many cultural opportunities in fields ranging from music and theater to science and the arts. The Midland Center for the Arts delivers hands-on exhibits in science, art and technology, at the Alden B. Dow Museum of Science and Art. The Center also provides two state-of-the-art auditoriums for audiences of 400 to 1500 to enjoy everything from the Midland Symphony Orchestra and Center Stage Theatre, to professional programming through MATRIX: Midland.

Midland County Historical Societies Heritage Park provides an opportunity to explore Midland County's history through a variety of avenues. The Herbert D. Doan Midland County History Center houses a research library, gift shop and the interactive Dorothy Dow Arbury Midland County History Gallery, which provides hands on exhibits for exploring Midland County's history. Also located at Heritage Park is the Herbert H. Dow Historical Museum, which explores the history and growth of Dow Chemical Company founded in Midland by Herbert H. Dow. Also located on the campus is the Bradley Home Museum and Carriage House; this 1874 house built by Benjamin F. Bradley allows visitors to see an historic home and furnishings of its time. The Carriage House holds an extensive collection of sleighs and carriages, and it has the largest working blacksmith shop in the Mid-Michigan area.

Skaters of all skill levels use Midland's 107,000-square-foot (9,900 m2) Civic Arena, which has two NHL-sized rinks and one Olympic-sized rink. A BMX track is located in Midland's Stratford park. Winner of a 2005 Michigan Cool Cities grant (a grass-roots, volunteer-based training program to revitalize a downtown area), Downtown Midland offers dining, shopping and entertainment for the whole family.

Walkers, joggers, bikers, and skaters can use the Pere Marquette Rail-Trail, a ribbon of asphalt stretching 30 miles (50 km) to the neighboring city of Clare. Midland County's system of natural pathways continues to expand with the recent addition of the Chippewa Trail, which connects to the Pere Marquette trail. The Chippewa Trail ends at the Chippewa Nature Center. This has a territory of more than 1,000 acres (400 ha) of deciduous and coniferous woods, rivers, ponds, wetlands ( marsh, fen, bog, and swamp) and upland fields.

Midland's Dow Gardens feature 100-acre (40 ha) of flower and vegetable gardens, plus an arboretum. These were the original gardens of the Herbert H. Dow homestead and are open for tours. In addition, the Alden B. Dow Home and Studio offers tours of this landmark American architect's unique and influential style. Alden Dow designed the Grace A. Dow Memorial Library, Midland's public library named in his mother's honor.

Midland is home to many recreational sporting facilities and organizations. These include the civic ice arena which hosts 2 NHL and one Olympic-sized rinks, a skate park downtown, and the Midland Community Tennis Center and its 32 courts. The tennis center also hosts a USTA Pro Circuit event and was part of the USTA award to Midland as America's Best Tennis Town 2009. [21]

Midland is also host to the following professional sports teams.

Midland uses the council–manager form of government. The council consists of five members elected from geographic wards. Council members serve a two-year term, and the full council is elected during odd years. The mayor and the mayor pro tem are chosen from the elected council by a vote of the council, who also appoint the city manager and city attorney, who serve at the pleasure of the council. [22] Federally, Midland is located in Michigan's 4th congressional district, represented by Republican John Moolenaar.

Midland Community Television Network (Charter Communications Channels 188,189,190,& 191 and AT&T U-Verse Channel 99) is the City of Midland's public, government, and education access cable television channel group. It is the purpose of MCTV to provide the people and organizations in the Midland area with an opportunity to be involved in using the television medium to inform, communicate, educate, and entertain. Midland Community Television Network is a service of the City of Midland serving the residents of the City of Midland and outlying areas through Charter Cable, AT&T U-Verse, and online video-on-demand. MCTV is funded through Video Service Provider franchise fees paid by Charter Communications and AT&T to the City of Midland for use of the public rights-of-way. Franchise fees are a small percentage of the service provider's gross revenue from subscribers within the service area. The MCTV Network is non-commercial and offers video services, training, and multi-media delivery for residents and non-profit organizations within the city or county of Midland. http://cityofmidlandmi.gov/MCTV

Midland is the city of license of two FM radio stations serving the Tri-Cities (Saginaw/Bay City/Midland) area. WKQZ ("Z93") is an active rock station owned by Citadel Broadcasting and broadcasting at 93.3 FM. WUGN is a non-commercial station at 99.7 FM owned by Family Life Communications, broadcasting adult-contemporary Christian music and teaching.

WMPX (1490 AM) is Midland's "hometown" locally owned radio station, owned by Steel Broadcasting and airing an adult standards ("Timeless Classics") format satellite-fed from ABC Radio. WMPX has an FM simulcast station in Beaverton, Michigan, WMRX (97.7 FM), which airs a small amount of local weekend programming separate from the AM. Other area stations include WEJC (88.3 FM) in White Star, Michigan, which airs contemporary Christian music and is affiliated with the Lansing-based " Smile FM" network; WPRJ (101.7 FM) in Coleman, Michigan, a Christian CHR station known as "The Fuse"; and country music station WGDN (103.1 FM) in nearby Gladwin, Michigan.

There is no regularly scheduled public transportation (bus service). Residents can call in advance to schedule pickup or return transport within the county by one government sponsored agency, "Dial-A-Ride", offering transport within the city only. Then "County Connection" a private run public transport for those outside the city of Midland but still within Midland County both for a nominal fee. Both also offer reduced fare rides for elderly and youth. [27]

In 1967, Dow Chemical attained criticality on a 100 kW nuclear research reactor at the Midland facility, primarily as a neutron source and to irradiate samples. [28] The reactor continues to operate. [29]

In 1968, Consumers Power began construction of a nuclear power plant in Midland, primarily for Dow Chemical Company. The project's budget was $257 million, with completion anticipated in 1972. Extreme construction problems caused years of delays and costs soared. The Three Mile Island accident in 1979 resulted in a massive change in nuclear regulatory requirements and system redesign. When it was revealed that the containment buildings were settling and foundation cracks were discovered, Dow canceled their contract with Consumers Power, and the project was abandoned in 1984. The $4.1 billion investment nearly bankrupted Consumers Power. However, in 1985, Consumers Power formed a partnership with eight other companies to convert Midland's abandoned nuclear plant into a gas-fired power plant. Transformation of the plant began in 1986 and was completed at a cost of $500 million. The Midland Cogeneration Venture began producing power in 1991 and that success restored faith in Consumers Power. [30] [31] The facility now produces 10% of the power consumption for the lower peninsula of Michigan. [32]