MidAmerica Nazarene University (MNU) is a Nazarene liberal arts college in Olathe, Kansas. It was established in 1966.

The Chapel at MidAmerica.

As one of eight U.S. liberal arts colleges [8] affiliated with the Church of the Nazarene, [9] the college receives financial backing from the Nazarene churches in its region. Part of each church budget is paid in to a fund for its regional school. Each college is also bound by a gentlemen's agreement not to actively recruit outside its respective educational region. [10] MNU is the college for the North Central Region of the United States, which comprises the Dakota- Minnesota, Nebraska, Kansas, Iowa, Kansas City, Joplin, and Missouri districts.

MNU offers undergraduate degrees in 40 majors, and seven graduate degrees in education and business. More than half of the full-time faculty at Mid-America Nazarene hold doctoral degrees. The academic calendar is on a semester system. [3] There were 1,720 students at the college in 2007, 1,295 of whom were undergraduates. [13] The 2007 acceptance rate for students who applied to the college was 81.1 percent. [14] 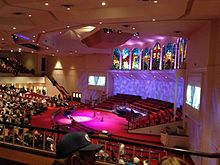 Interior of sanctuary of College Nazarene Church on campus.

Enrollment comprises approximately 1,300 undergraduate and 200 graduate students, mostly from the North Central United States. Men and women are fairly equal in number. Over 25 percent of undergraduate students are over 25 years old. Members of the traditional undergraduate population who do not live locally with relatives must reside in campus housing. Students also attend chapel services and must follow the college's policy of no smoking, drinking, gambling or sex. Students participate in religious and service organizations, musical and theatrical groups, publications, intramural sports, and varsity sports. [3]