Megan Martha White (born December 10, 1974) is an American drummer and occasional singer known for her work with Jack White in the Detroit rock duo The White Stripes. Her music career began when, on an impulse, she played on Jack's drums in 1997. Jack was deeply inspired by her minimalist and un-schooled drumming style. The two decided to form a band and began performing two months later. The duo named themselves The White Stripes because of their last name and Meg's fondness for peppermint candy. The band quickly became a Detroit underground favorite before reaching national, then international fame. White has been nominated for various awards as a part of the White Stripes, and has received four Grammy Awards.

Her drumming style has been called "primal" for its simplicity, and has drawn both praise and criticism. Her musical influences are wide and varied, with Bob Dylan being her favorite artist.

White calls herself "very shy", [1] and has kept a low public profile. Meg and Jack White publicly portrayed themselves as siblings. However, public records emerged in 2001 that indicated Meg and Jack were not related and in fact had married in 1996, prior to the band's formation. They divorced in 2000, before The White Stripes ascended to international fame. In 2009, she married guitarist Jackson Smith, son of musicians Patti Smith and Fred "Sonic" Smith. They divorced in 2013.

While on tour in support for The White Stripes' sixth studio album, Icky Thump, White suffered a bout of acute anxiety, and the remaining dates of the tour were cancelled. After a few public appearances, and a hiatus from recording, The White Stripes announced in February 2011 that they would be disbanding. White has not been active in the music industry since.

White was born in Grosse Pointe Farms, Michigan on December 10, 1974, to Walter Hackett White, Jr. and Catherine White. [1] She grew up in the affluent [2] Detroit suburb with her parents and older sister, Heather. [1] She attended Grosse Pointe North High School and, according to one classmate, was "always the quiet, obviously artistic type, and she just kept very much to herself." [1] While still in high school, she decided not to go to college and instead pursue a career as a chef. [1] [3] Meg began to work at Memphis Smoke, a restaurant in downtown Royal Oak. It was there that she first met budding musician John "Jack" Gillis, a fellow high school senior from a Detroit neighborhood known as Mexicantown, [1] [3] and they frequented the coffee shops, local music venues, and record stores of the area. [4] They began dating and were eventually married on September 21, 1996. [5] [6] Gillis took her last name. [7]

According to the bands mythos, on Bastille Day (July 14) of 1997, Meg tried playing Jack's drumkit on a whim. [8] In Jack's words, "When she started to play drums with me, just on a lark, it felt liberating and refreshing. There was something in it that opened me up." [7] The two then began calling themselves The White Stripes (because Meg favored peppermint candies) and soon played their first gig at the Gold Dollar in Detroit. [9] Their live performances were made of three basic elements, Jack did the guitar and vocal work while she played drums. [7]

Jack and Meg presented themselves as siblings to an unknowing public, [10] [8] and keeping to a chromatic theme, dressed only in red, white, and black. [11] [12] They began their career as part of Michigan's underground, garage rock music scene. [11] [3] [13] They played along with and opened for more established local bands such as Bantam Rooster, the Dirtbombs, Two Star Tabernacle, Rocket 455, and the Hentchmen, among others. [14] [3] In 1998, the band signed with Italy Records, a small and independent Detroit-based garage punk label of Dave Buick. [15] The band released its self-titled debut album in 1999, and a year later the album was followed up by the cult classic, [16] De Stijl. The album eventually peaked at number 38 in Billboard's Independent Albums chart. Even as their success as a band was mounting, their personal relationship was faltering, and they were divorced in 2000. [6]

As the White Stripes' fame spread beyond Detroit, the unconventional band with no bass player and a novice drummer became the subject of mixed commentary among critics and fans. [17] Of a 2002 concert in Cleveland, Ohio, Chuck Klosterman said, "[Meg] never grimaced and didn't appear to sweat; yet somehow her drums sounded like a herd of Clydesdales falling out of the sky, one after another. Clearly this is a band at the apex of its power." [18] UK periodical, The Times said that she "reduced the art of drumming to its primary components, bashing the snare and cymbal together on alternating beats with the bass drum in a way that recalled Moe Tucker of the Velvet Underground." [13] An NPR article gave high praise, saying "On the drums, Meg White smashed out carnal, visceral, raw, sometimes funny and always urgent stories that told of the human experience. Maybe that's the thumping feeling that penetrates our pores and anchors our attention when we listen to The White Stripes. Maybe that's why we ever cared about the band in the first place." [19] On the other hand, the Associated Press called her playing "maddeningly rudimentary." [20] The satirical news site The Onion once featured the headline "Meg White Drum Solo Maintains Steady Beat For 23 Minutes". [21] In reference to her "primal" approach to drumming, [14] she remarked, "That is my strength. A lot of drummers would feel weird about being that simplistic." [7] Jack has stated Meg's drumming to be the "best part of this band," [7] and called her a "strong female presence in rock and roll." [22] He called her detractors "sexist". [7] 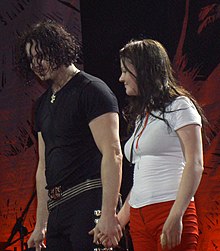 Meg White (right) after a performance in Sydney, 2006.

Though Jack usually sang lead vocals, Meg occasionally sang as well, the first time being backup on the record "Your Southern Can is Mine" from De Stijl. She sang lead on four Stripes' songs: "In the Cold, Cold Night", from the album Elephant, "Passive Manipulation" from Get Behind Me Satan, "Who's a Big Baby", the B-side to " Blue Orchid," and "St. Andrew (This Battle Is in the Air)" from Icky Thump. She also sang the popular Christmas song " Silent Night" on the single Candy Cane Children. Both Meg and Jack share vocal duties on the tracks " Hotel Yorba" and "This Protector" from White Blood Cells, "Rated X" from the "Hotel Yorba" single, "Well It's True That We Love One Another" on Elephant, and " Rag and Bone" from Icky Thump. Andrew Katchen with Billboard magazine called her vocals "delicate and sweet." [23]

In the summer of 2007, before a show in Southaven, Mississippi, Ben Blackwell (Jack's nephew and the group's archivist) says that Meg approached him and said, "This is the last White Stripes show." He asked if she meant of the tour, but she responded, "No. I think this is the last show, period." [24] On September 11, 2007, the White Stripes announced via their website that they were canceling 18 tour dates due to Meg's acute anxiety. [25] The following day, the duo cancelled the remainder of their 2007 UK tour dates as well. [26]

Jack worked with other artists in the meantime, but Meg remained largely out of the public eye, though in June 2008, she appeared briefly onstage during an encore set of a Detroit show with one of Jack's bands, the Raconteurs. [27] In an interview with Music Radar, he explained that Meg's acute anxiety had been a combination of a very short pre-tour rehearsal time—that was further reduced by the birth of his son—and a hectic, multi-continental touring schedule. [28] He said, "I just came from a Raconteurs tour and went right into that, so I was already full-speed. Meg had come from a dead-halt for a year and went right back into that madness. Meg is a very shy girl, a very quiet and shy person. To go full-speed from a dead-halt is overwhelming, and we had to take a break." [28] Even so, Jack revealed the band's plan to release a seventh album by the summer of 2009. [29] [30] On February 20, 2009—and on the final episode of Late Night with Conan O'Brien—the band made their first live appearance after the cancellation of the tour, performing the song "We Are Going to Be Friends." [31] A documentary about their Canadian tour—titled The White Stripes: Under Great White Northern Lights—premiered at the Toronto International Film Festival on September 18, 2009. [32] Directed by Emmett Malloy, the film documents the band's summer 2007 tour across Canada and contains live concert and off-stage footage. [33] The duo appeared at the film's premiere and, before the movie started, they made a short speech about their love of Canada and why they chose to debut their movie in Toronto.[ citation needed] A second feature titled Under Nova Scotian Lights was prepared for the DVD release.

However, almost two years passed with no new releases, and on February 2, 2011, the band reported on their official website that they were disbanding. The statement emphasized that it was not due to health issues or artistic differences, but "mostly to preserve what is beautiful and special about the band." [34]

White has also appeared on the cover of Whirlwind Heat's single "Pink", in a Detroit Cobras music video "Cha Cha Twist" as Little Red Riding Hood, and appeared with Jack White in a segment of Jim Jarmusch's 2003 film Coffee and Cigarettes.

The White Stripes guest starred on The Simpsons in an episode titled " Jazzy and the Pussycats", which first aired on September 17, 2006. [35] She has done some modeling for Marc Jacobs' 2006 Spring line. [36] Two of her pictures appeared in the March 2006 issue of ELLE.

White was chosen by Bob Odenkirk to compose a drum theme for Dax Shepard's character in the 2006 film Let's Go to Prison. [37] [38] Against Odenkirk's wishes however, the studio removed it from the film. [39] Ray LaMontagne wrote a song, called "Meg White", about the drummer; it appears on LaMontagne's album Gossip in the Grain.

The more you talk, the less people listen.

White is—by her own admission—"very shy," [1] and gives few interviews. She guards her privacy in a manner that she identifies with Bob Dylan, whom she admires. [40]

In May 2009, White married guitarist Jackson Smith, son of musicians Patti Smith and Fred "Sonic" Smith. The wedding took place in Nashville, Tennessee, in a small ceremony in Jack White's backyard. [41] White and Smith divorced in July 2013. [42] [43] As of 2014, White resides in Detroit, Michigan. [44] 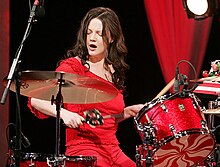 White began with a red Ludwig Classic Maple kit that had a red and white peppermint swirl on the resonant heads of the toms and bass drum. [45] On the Icky Thump tour, the bass drum head design was switched to a button. While recording From the Basement: The White Stripes, the design was switched to an image of White's hand holding the apple from the Get Behind Me Satan cover. Beginning in 2006,[ citation needed] she also used a pair of Paiste 14" Signature Medium Hi-Hats, a 19" Signature Power Crash, and a 22" 2002 Ride. Meg also used Remo and Ludwig drumheads, various percussion instruments and Vater drumsticks.

White's Pearl Export bass drum—complete with original peppermint-painted bass drum that she used with the band's first show—and the Pearly Queen outfit she wore in the photos for the Icky Thump album, were featured in the Rock and Roll Hall of Fame "Women Who Rock" exhibition. [46] In 2009, White donated her Ludwig kit to the Jim Shaw Rock 'N' Roll Benefit, an auction to raise money for the Detroit musician who was suffering from cancer. [47] [48]

White has won several notable awards as a member of The White Stripes.