The racetrack is 2.238 miles (3.602 km) long, with a 180 feet (55 m) elevation change. [1] [2] Its eleven turns are highlighted by the circuit's signature turn, the downhill-plunging "Corkscrew" at Turns 8 and 8A. A variety of racing, exhibition, and entertainment events are held at the raceway, ranging from superkarts to sports car racing to music festivals. Laguna Seca is classified as an FIA Grade Two circuit. [3]

The name Laguna Seca is Spanish for "dry lagoon": the area where the track now lies was once a lake, and the course was built around the dry lake bed. After the course was reconfigured, two artificial ponds were added. 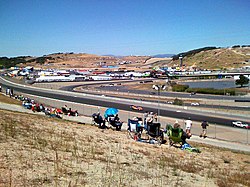 Laguna Seca Raceway from between Turns 1 and 2 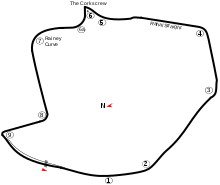 The earliest development of the local area occurred in 1867 with the founding of the nearby Laguna Seca Ranch, which has operated continuously for 140 years with grazing and equestrian uses. [4]

The track was built in 1957 at a cost of $1.5 million raised from local businesses and individuals on part of the US Army's Fort Ord (a maneuver area and field artillery target range) after the nearby Pebble Beach Road Races were abandoned for being too dangerous. In 1974 the property was deeded over to the Monterey County Parks Department and continues to be part of the park system.

The day-to-day operations of the track, along with the management and promotion of major racing events, are handled by the Sports Car Racing Association of the Monterey Peninsula (SCRAMP), which is a non-profit organization. With oversight by a board of local residents, SCRAMP operates with a professional staff on-site with the goal of generating income through the operations of the racetrack which is then redistributed to local charities.

The track itself has undergone significant changes over the past two decades to meet evolving safety homologation requirements of the Fédération Internationale de Motocyclisme (FIM), Fédération Internationale de l'Automobile (FIA) and other sanctioning bodies. Changes include the addition of the entire infield area in 1988 (present day turns 3, 4, and 5, eliminating the straight that started at present day turn 2 and ended at present day turn 5) extending the track from its original 1.9-mile (3.1 km) length to meet the minimum-track-length criteria of the FIM for MotoGP events, plus the more recent relocation of pedestrian bridges and embankments, and the expansion of gravel pits outside turns 1, 2, 5, 6, 8, 9, 10 for additional runoff. The original media center was demolished in 2006 to make way for additional run-off room in Turn 1. Also in 2006, the 'hump' at the top of the Rahal Straight was flattened to accommodate the MotoGP riders, though some claim that this increases the wind effects that can perturb a race motorcycle. Remnants of the old configuration can still be seen from the parking lot between turns two and five. They are found underneath a road leading to the parking area for entrant trailers and RVs. 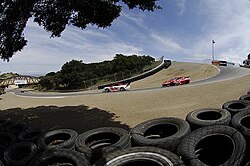 A view of the "Corkscrew" from the bottom

The famous Turn 8 and 8A combination, popularly referred to as 'the Corkscrew', is considered one of the motorsport world's most challenging turns,[ citation needed] due to the 18-metre drop in elevation as well as its blind crest and apex on the uphill approach. [5]

A Champ Car World Series weekend had been a prominent event from 1983 through 2004, when its spot on the calendar was shifted to the San Jose Grand Prix. On the last lap of the 1996 CART race, Alex Zanardi passed Bryan Herta on the inside of the Corkscrew to take the victory. Uruguayan driver Gonzalo Rodríguez died during the practice session of the 1999 CART race after crashing at the same corner. Because of the incident, runoff was installed at the end of the Rahal Straight.

Champ Car announced on September 11, 2007 that they would be returning the Northern California race to Laguna Seca from San Jose over the May 16–18 weekend in 2008. [6] But the subsequent merger of Champ Car and IndyCar resulted in the race being canceled. On Jul 17, 2018 IndyCar announced a return of IndyCars to Laguna Seca, with the event to be held the weekend of Sept. 20-22, 2019.

The track is also the site of the annual Rolex Monterey Motorsports Reunion, formerly known as the Monterey Historic Automobile Races. The event features an extraordinarily eclectic mixture of race cars on the course. Each year features a different marque. Considered one of the two greatest historic racing events (along with the Goodwood Festival in England), attendance often rivals, or surpasses the professional racing events listed above.

There are many permanent dry and hook-up camping facilities located at the raceway, which are available year-round as part of the Laguna Seca Recreation Area, the county park in which the racetrack is set.

A study by California State University, Monterey Bay and commissioned by SCRAMP states that the raceway generates $62.1 million to the Monterey County economy and $5.2 million in state and local taxes. [7]

In 1989, the year following the last Formula One race in Detroit, choices for a new location for the United States Grand Prix came down to Laguna Seca and Phoenix. [8] [9] The aforementioned 1988 improvements to the track were made in part to lure the F1 race. In the final decision, Laguna Seca was thought to be too remote and too small for an F1 crowd, and so Phoenix was granted the Grand Prix.

Officially, Castroneves is still the recordholder as the times of Zonta, Bourdais and Gené were set during exhibition and testing sessions, and official records can only be set in race conditions (either in practice, qualifying, or during a race).

A Mission Motors Mission R, ridden by Steve Rapp, holds the outright EV lap record with a time of 1:31.376. This was set during qualifying for the 2011 FIM e-Power International Championship/ TTXGP World Series race. [17]

When not being used by the major events the track can be rented. Approximately twice a year the Sports Car Club of America holds regional club races for the San Francisco Region. Various clubs rent the track throughout the year for informal high performance driving schools that allow the public to drive their own cars at speed. The raceway has also played host to prototype testing of the Nissan GT-R in 2007. [18]

The track is featured in video games such as the Gran Turismo series (including the bike version Tourist Trophy), Forza Motorsport, and the MotoGP series. In a bid to compare real life versus video games, Jeremy Clarkson of the British automotive show Top Gear attempted to beat his Gran Turismo time of 1:41.148 in a Honda NSX by racing the real track in the same car in 2005. During the trials, Clarkson determined that the game omitted a few details of the track, and the game's physics allowed him to brake later when coming into turns than he could in real life. As a consequence, reality prevailed and he managed a best time of only 1:57 on the real course. [19] However, both he and the track instructor agreed that it is possible to complete the course in 1:41 in a Honda NSX if the driver were sufficiently experienced, talented, and most importantly fearless.

It was also used in 1975 for the film Herbie Goes to Monte Carlo as a qualifying track.

Laguna Seca and the part of the old Fort Ord that is now Bureau of Land Management land annually host the Sea Otter Classic "Celebration of Cycling". The event has now become the largest cycling festival in the United States, bringing in over 10,000 racers and over 100,000 spectators - and is now the first major event of the year, typically held in April – for both the road bike and mountain bike professional seasons.

Several times each year, bicycles are permitted on the track for 2 hours. The admission fee is $10 per bicycle rider.

The raceway has been occasionally as a venue for concerts and other non-sporting events. The Grateful Dead performed on the racetrack in May 1987; Later that night, the band filmed their music video for " Touch of Grey" there. [20] [21]

In the 1990s, the raceway was the venue for the Laguna Seca Daze music festival, which featured performances from music acts in the folk, alternative rock and jam band genres. Artists who performed at the festival include Bob Dylan, Phish, Blues Traveler, 10,000 Maniacs, Big Head Todd and the Monsters, Meat Puppets, 4 Non Blondes, Jeff Healey, The Allman Brothers Band, Gin Blossoms and Shawn Colvin. [23] [24] [25] [26]

On June 24, 2011, John Mueller of Muellerized Suspension Systems married Sheila Stone on the top of the Corkscrew at Laguna Seca. This is the location where the ashes of Lee Mueller (4 time SCCA National Champion, IMSA GTU Champion, 3 time winner of the 24 Hours of Daytona, and 12 Hours of Sebring winner), John Mueller's father, were spread. [27]