From Wikipedia
(Redirected from Massachusetts College of Pharmacy and Health Sciences)
https://en.wikipedia.org/wiki/Massachusetts_College_of_Pharmacy_and_Health_Sciences

Massachusetts College of Pharmacy and Health Sciences (MCPHS University) is a private university focused on medical programs and located in the Longwood Medical and Academic Area of Boston, Massachusetts. The university provides traditional and accelerated programs of study focused on professional education in pharmacy and the health sciences. Since 2000, MCPHS University has expanded to include two additional campuses, located in Worcester, Massachusetts, and Manchester, New Hampshire.

Founded as the Massachusetts College of Pharmacy in 1823 by fourteen Boston pharmacists, MCPHS University is the oldest institution of higher education in Boston. It is also the second-oldest and largest college of pharmacy in the United States, preceded only by the Philadelphia College of Pharmacy (Now University of the Sciences in Philadelphia), which was founded in 1821. In 1825, the University published the First American Pharmaceutical Library Catalogue, detailing the effects of many pharmaceuticals. In 1852, the University received a charter from the Great Court of the Commonwealth of Massachusetts to grant its first formal degree. [2]

In 1918, the University established the George Robert White Building in Boston’s Longwood Medical Area, across from Harvard Medical School to serve as its main campus. In 1979, The General Court of the Commonwealth of Massachusetts approved a change in the University's charter to allow degree granting authority in the allied health sciences, and the University officially changed its name to the Massachusetts College of Pharmacy and Allied Health Sciences.

To reflect this expansion and the diversity of programs it offers while preserving its acronym “MCPHS,” the institution legally changed its name to MCPHS University in the spring of 2013. As of April 1, 2016, New England School of Acupuncture (NESA) became part of MCPHS University.

In 2017, the school was dealing with overcrowding after a surge in enrollment. [4] In 2019 the school received an award for restoring the Duncan and Goodell Building at 34 Mechanic St. [5]

MCPHS University's Boston campus is located at 179 Longwood Avenue in the Longwood Medical and Academic Area. It is adjacent to The Massachusetts College of Art and Design and Harvard Medical School, and near health care institutions such as Children's Hospital Boston, The Dana-Farber Cancer Institute, Brigham and Women's Hospital, and Beth Israel Deaconess Medical Center. The Boston campus is composed of three main buildings: the George Robert White Building, the Ronald A. Matricaria Academic and Student Center and the John Richard Fennell Building, which are all structurally interconnected to the student dormitories on campus.

The research facilities at MCPHS University are equipped for each of the academic areas of specialization. There are such specialized facilities as a suite for radioisotope research, a product development laboratory equipped for pharmaceutical tableting, coating and encapsulation and a facility to manufacture liquids, ointments, and sterile cosmetic products. Instruments available include infrared, ultraviolet, and nuclear magnetic resonance spectrometers, gas chromatographs, and high-pressure liquid chromatographs. Computer and animal research facilities are also available. In addition, research instrument facilities, if not available on campus, are available at other institutions in the Greater Boston/ Cambridge area through clinical and academic affiliations. [7] 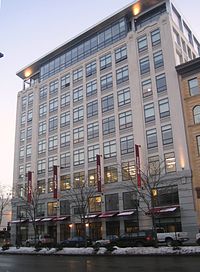 The 28 Mechanic Street building is home to MCPHS Online, which was formed in 2011. This physical facility houses the MCPHS Online staff members charged with the development and oversight of MCPHS Online programs. [10]

The New England School of Acupuncture treatment center and programs are housed in the 19 Norwich Street building. [8]

The MCPHS University Manchester, New Hampshire campus is located at 1260 Elm Street in downtown Manchester. In similar format to that of Worcester, the MCPHS University-Manchester campus offers accelerated programs in Nursing and Doctor of Pharmacy, as well as a Master of Occupational Therapy program and Master of Physician Assistant Studies for post-baccalaureate students. The 33,000-square-foot (3,100 m2) campus building holds the school's library, classrooms, laboratories, seminar rooms, administrative offices, and student space. Many of the Manchester classrooms are equipped for video conferencing with Worcester classrooms.

In 2016, the New England School of Acupuncture (NESA) combined with MCPHS University's Worcester campus. The NESA was established in 1974, making it the oldest acupuncture school in the United States. [11] [12]

Colleges of the Fenway

MCPHS University-Boston is a member of the Colleges of the Fenway, a collegiate consortium in the Longwood Medical and Academic Area. The association promotes collaboration between local schools, both academically and with buildings. The consortium includes MCPHS University, Emmanuel College, MassArt, Simmons, and Wentworth Institute of Technology. Students are able to cross register between institutions and participate in shared social events planned by the Colleges of the Fenway and various groups throughout the campus. Students may also live at either their school of attendance, or in the campus dormitories of the other member schools. Collectively, the colleges represent more than 12,000 undergraduate students, comprising 16.2% of the total Boston population of undergraduates attending four-year colleges, or around 700 full-time faculty and 2,300 course offerings. [13]

MCPHS University-Worcester is a member of the Colleges of Worcester Consortium, a collaboration of twelve academic institutions which work to further the individual missions of the member institutions while advancing higher education in the region.

The University’s Center for International Studies (CIS) is a network of individuals and departments that provides services to international students and to US students seeking educational and professional opportunities abroad. The Center focuses on student success and global engagement.

MCPHS University partners with the Colleges of the Fenway Global Education Opportunity Center (GEO Center) to provide students with opportunities to study and travel abroad.