Table of Contents ⇨
This article is about the college in Maryville, Tennessee. For the university in St. Louis, Missouri, see Maryville University.

Maryville College is a private liberal arts college in Maryville, Tennessee. It was founded in 1819 by Presbyterian minister Isaac L. Anderson for the purpose of furthering education and enlightenment into the West. The college is one of the 50 oldest colleges in the United States and the 12th-oldest institution in the South. It is associated with the Presbyterian Church (USA) and enrolls about 1,100 students. Maryville College's nickname is the Fighting Scots. The sports teams compete in NCAA Division III athletics in the USA South Athletic Conference.

As a liberal arts school, the college promotes a well-rounded education. The school requires numerous general education courses to achieve this. The courses are taken through the conclusion of the student's education, contributing to the graduating student's becoming knowledgeable in a number of fields.

Maryville College is one of the few colleges in the nation that requires graduating students to complete a comprehensive exam in their major and conduct an extensive senior thesis. 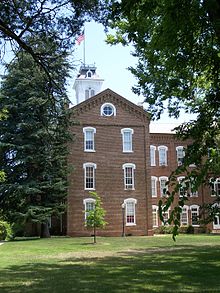 Maryville College was founded as the Southern and Western Theological Seminary in 1819 by Isaac L. Anderson, a Presbyterian minister. Anderson had founded a school, Union Academy, in nearby Knox County, before becoming minister at New Providence Presbyterian Church in Maryville. He expressed to his fellow clergy the need for more ministers in the community, including a request to the Home Missionary Society and an appeal to divinity students at Princeton University in 1819. The new seminary was intended to help fill this need for ministers. It opened with a class of five men, and the new school was adopted by the Synod of Tennessee and formally named the Southern and Western Theological Seminary in October 1819. [2]

In 2004, Maryville College was recognized by the Race Relations Center of East Tennessee for its history of "contributing to improving the quality of life for all in East Tennessee". [3] Maryville College was racially integrated from its earliest days. An ex-slave named George Erskine studied there in 1819, sponsored by the Manumission Society of Tennessee. Erskine went on to preach during the 1820s and was formally ordained by the General Assembly of the Presbyterian Church in 1829. [4]

Maryville College was closed during the Civil War, but, upon reopening, it again admitted students regardless of race, assisted by the Freedmen's Bureau. [5]

When the State of Tennessee forced Maryville College to segregate in 1901, the College gave $25,000—a little more than a tenth of its endowment at the time—to Swift Memorial Institute, the college's sister school. Swift was founded by William Henderson Franklin, the first African American to graduate from Maryville College (1880). His institute educated black students during the era of imposed segregation.

After the Brown v. Board of Education decision in 1954, Maryville College immediately re-enrolled African Americans.

In 1875, Maryville College conferred the first college degree to a woman in the state of Tennessee. The recipient was Mary T. Wilson, the older sister of Samuel T. Wilson, who later served as president of the college from 1901 until 1930.[ citation needed] 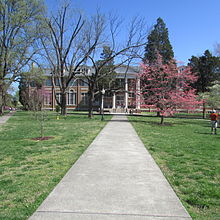 Thaw Hall, home of the library and the Social Science majors

Maryville College is located in the City of Maryville, Blount County, Tennessee. Its current campus was established in 1869 on a 60-acre (24 ha) that was then on the city's outskirts. Several campus buildings were completed over the next five decades, with financial help from major institutions and philanthropists. [7] The college's historic buildings comprise the Maryville College Historic District, which was listed on the National Register of Historic Places in 1982; Anderson Hall is also separately listed on the National Register. [6]

The vast majority of Maryville College students reside in one of the many on-campus residence halls, which are: 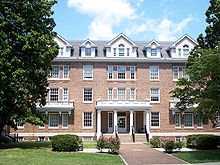 All residence halls besides Copeland, Davis, Gamble, and Gibson allow alcohol to those of age.

In 2010 Maryville College finished the construction of the Clayton Center for the Arts. [9] This new CCA building is home to a large theatre, a flex theatre, and also classrooms and offices for professors of Maryville College. [10] There are also plans to renovate Anderson Hall beginning June 2013. The renovations will focus on the interior and are estimated to be completed by August 2014. [11]

Features of the college

The college's heating system started as an experiment by the Tennessee Valley Authority, the Department of Energy and the College in 1982. Coinciding with the World's Fair in Knoxville, the experiment tested the efficiency of burning wood waste as an energy source. Tours of the plant and demonstrations were held at the College.[ citation needed]

The college's oldest building, Anderson Hall, built in 1870, is currently used as a classroom building. It is listed on the National Register of Historic Places.

Crawford House is LEED Gold certified, and it is the oldest of 5 existing buildings to be made so in Tennessee.