"Maryland, My Maryland" is the regional anthem (or state song) of the U.S. state of Maryland. The song is set to the melody of "Lauriger Horatius" [1] — the same tune " O Tannenbaum" was taken from. The lyrics are from a nine-stanza poem written by James Ryder Randall (1839–1908) in 1861. The state's general assembly adopted "Maryland, My Maryland" as the state song on April 29, 1939. [2]

The song's words refer to Maryland's history and geography and specifically mention several historical figures of importance to the state. The song calls for Marylanders to fight against the U.S. and was used across the Confederacy during the Civil War as a battle hymn. [3] It has been called America's "most martial poem". [4]

Due to its origin in reaction to the Baltimore riot of 1861 and Randall's support for the Confederate States, it includes lyrics that refer to President Abraham Lincoln as "the tyrant", "the despot", and "the Vandal", and to the Union as "Northern scum", as well as referring to the phrase " Sic semper tyrannis", which was the slogan later shouted by Marylander John Wilkes Booth when he assassinated Lincoln. [5] For these reasons, occasional attempts have been made to replace it as Maryland's state song, [6] but to date, all such attempts have failed. [7]

The poem was a result of events at the beginning of the American Civil War. During the secession crisis, U.S. President Abraham Lincoln (referred to in the poem as "the despot" and "the tyrant") ordered U.S. troops to be brought to Washington, D.C., to protect the capital and to prepare for war with the seceding southern states. Many of these troops were brought through Baltimore City, a major transportation hub. There was considerable Confederate sympathy in Maryland at the time, as well as a large number of residents who objected to waging a war against their southern neighbors. [8] Riots ensued as Union troops came through Baltimore on their way south in April 1861 and were attacked by mobs. A number of Union troops and Baltimore residents were killed in the Baltimore riots. The Maryland legislature summarized the state's ambivalent feelings when it met soon after, on April 29, voting 53–13 against secession, [9] [10] but also voting not to reopen rail links with the North, and requesting that Lincoln remove the growing numbers of federal troops in Maryland. [8] At this time the legislature seems to have wanted to avoid involvement in a war against its seceding neighbors. [8] The contentious issue of troop transport through Maryland would lead one month later to the Chief Justice of the Supreme Court, also a Marylander, penning one of the United States' most controversial wartime rulings, Ex parte Merryman. [11]

One of the reported victims of these troop transport riots was Francis X. Ward, a friend of James Ryder Randall. Randall, a native Marylander, was teaching at Poydras College in Pointe Coupee Parish, Louisiana, at the time and, moved by the news of his friend's death, wrote the nine-stanza poem, "Maryland, My Maryland". The poem was a plea to his home state of Maryland to secede from the Union and join the Confederacy. Randall later claimed the poem was written "almost involuntarily" in the middle of the night on April 26, 1861. Being unable to sleep after hearing the news, he claimed "some powerful spirit appeared to possess me ... the whole poem was dashed off rapidly ... [under] what may be called a conflagration of the senses, if not an inspiration of the intellect". [12]

The poem contains many references to the Revolutionary War as well as to the Mexican–American War and Maryland figures in that war (many of whom have fallen into obscurity). It was first published in the New Orleans Sunday Delta. The poem was quickly turned into a song — put to the tune of "Lauriger Horatius" — by Baltimore resident Jennie Cary, sister of Hetty Cary. [13] It became instantly popular in Maryland, aided by a series of unpopular federal actions there, and throughout the South. It was sometimes called "the Marseillaise of the South". Confederate States Army bands played the song after they crossed into Maryland territory during the Maryland Campaign in 1862. [14] By 1864, the Southern Punch noted the song was "decidedly most popular" among the "claimants of a national song" for the Confederacy. [15] According to some accounts, General Robert E. Lee ordered his troops to sing "Maryland, My Maryland", as they entered the town of Frederick, Maryland, but his troops received a cold response, as Frederick was located in the unionist western portion of the state. [16] At least one Confederate regimental band also played the song as Lee's troops retreated back across the Potomac after the bloody Battle of Antietam.

During the War, a version of the song was written with lyrics that supported the U.S. cause. [17] [18]

After the War, author Oliver Wendell Holmes Sr. compared "Maryland, My Maryland" with " John Brown's Body" as the two most popular songs from the opposing sides in the early months of the conflict. Each side, he wrote, had "a sword in its hand, each with a song in its mouth". The songs indicated as well their respective audiences, according to Holmes: "One is a hymn, with ghostly imagery and anthem-like ascription. The other is a lyric poem, appealing chiefly to local pride and passion." [12] 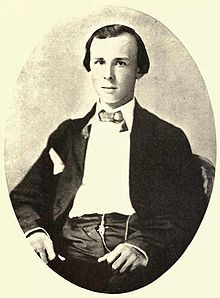 James Ryder Randall in 1861, the year he wrote "Maryland, My Maryland

I
The despot's heel is on thy shore,
Maryland! [a]
His torch is at thy temple door,
Maryland!
Avenge the patriotic gore
That flecked the streets of Baltimore,
And be the battle queen of yore,
Maryland! My Maryland!

II
Hark to an exiled son's appeal,
Maryland!
My mother State! to thee I kneel,
Maryland!
For life and death, for woe and weal,
Thy peerless chivalry reveal,
And gird thy beauteous limbs with steel,
Maryland! My Maryland!

III
Thou wilt not cower in the dust,
Maryland!
Thy beaming sword shall never rust,
Maryland!
Remember Carroll's sacred trust,
Remember Howard's warlike thrust,—
And all thy slumberers with the just,
Maryland! My Maryland!

IV
Come! 'tis the red dawn of the day,
Maryland!
Come with thy panoplied array,
Maryland!
With Ringgold's spirit for the fray,
With Watson's blood at Monterey,
With fearless Lowe and dashing May,
Maryland! My Maryland!

VI
Dear Mother! burst the tyrant's chain,
Maryland!
Virginia should not call in vain,
Maryland!
She meets her sisters on the plain—
" Sic semper!" 'tis the proud refrain
That baffles minions back amain,
Maryland! My Maryland!

VII
I see the blush upon thy cheek,
Maryland!
For thou wast ever bravely meek,
Maryland!
But lo! there surges forth a shriek,
From hill to hill, from creek to creek—
Potomac calls to Chesapeake,
Maryland! My Maryland!

IX
I hear the distant thunder-hum,
Maryland!
The Old Line's bugle, fife, and drum,
Maryland!
She is not dead, nor deaf, nor dumb—
Huzza! she spurns the Northern scum!
She breathes! she burns! she'll come! she'll come!
Maryland! My Maryland!

In July 2015, Delegate Peter A. Hammen, chairman of the Maryland House of Delegates House Health and Government Operations Committee, asked the Maryland State Archives to form an advisory panel to review the song. The panel issued a report in December 2015, that suggested that it was time the song was retired. The panel offered several options for revising the song's lyrics or replacing it with another song altogether. [22]

The panel report stated that the Maryland state song should:

In 2016, the Maryland Senate passed a bill to revise the song to include just the third verse of Randall's lyrics and only the fourth verse of a poem of the same name, written in 1894, by John T. White. [24] [25] This revision had the support of Maryland Senate President Thomas V. "Mike" Miller, who resisted any changes to "Maryland, My Maryland" in the past. [26] [27] It was not reported out of the Health and Government Operations Committee in the House of Delegates, however. [28]

On August 28, 2017, The Mighty Sound of Maryland, the marching band of the University of Maryland, announced that they would suspend playing the song until they had time to review if it was aligned with the values of the school. [29]

On March 16, 2018, the Maryland Senate passed an amended bill that would have changed the status of "Maryland! My Maryland!" from the "official State song" to the "Historical State song". [30] The bill received an Unfavorable Report by the House Health and Government Operations Committee on April 9, 2018. [31]

Other uses of the melody

The songs " Michigan, My Michigan", " Florida, My Florida", and " The Song of Iowa" [32] are set to the same tune as "Maryland, My Maryland". [33] In 1962, Edmund Wilson used the phrase "patriotic gore" from the song as the title of his book on the literature of the American Civil War. [34] The third verse of "Maryland, My Maryland" is sung annually at the Preakness Stakes by the United States Naval Academy glee club. [35]

The College of the Holy Cross [36] and St. Bonaventure University [37] both use the tune for their respective alma maters.

In the film version of Gone with the Wind, "Maryland, My Maryland" is played at the opening scene of the Charity Ball when Scarlett and Melanie are reacquainted with Rhett Butler. This confused some viewers to think it was a Christmas ball with " O Tannenbaum" playing in the background.

Kid Ory's Creole Jazz Band recorded an instrumental version of "Maryland, My Maryland" on 8 September 1945, in the New Orleans jazz revival. [38] Bing Crosby included the song in a medley on his album 101 Gang Songs (1961).