Table of Contents ⇨
For counties with the same name, see Marion County (disambiguation).
Not to be confused with Marion, Arkansas.
U.S. county in Arkansas

Marion County is located in the Ozark Mountains in the U.S. state of Arkansas. The county is named for Francis Marion, the famous "Swamp Fox" of the Revolutionary War. Created as Arkansas's 35th county in 1836, Marion County is home to one incorporated town and four incorporated cities, including Yellville, the county seat. The county is also the site of numerous unincorporated communities and ghost towns. The county included part of what is now Searcy County, Arkansas, with many opposing to dividing them, which helped fueled the bloody Tutt-Everett War between 1844 and 1850.

Occupying 640 square miles (170,000 ha), Marion County is the 33rd smallest county in Arkansas. As of the 2010 Census, the county's population is 16,653 people in 3,531 households. [2] Based on population, the county is the twenty-seventh smallest county of the 75 in Arkansas. [3] Located in the Ozarks, the county is largely covered with rugged terrain and waterways, with the exception of King's Prairie in the southwestern portion. It is drained by the White River, Buffalo River, Crooked Creek, and the Little North Fork of White River. Protected areas of the county include Bull Shoals-White River State Park, Ozark National Forest, the Buffalo National River and four wildlife management areas (WMAs).

Although no Interstate highways are located in Marion County, two United States highways ( U.S. Route 62 [US 62] and US 412) and eight Arkansas state highways run in the county. [4]

Prior to white settlement, the Ozark Plateau was inhabited by the Osage Indians for centuries. [5] Present-day Arkansas was under French rule from 1682 until the Spanish took over in 1762. The territory was returned to France in 1800 and then sold to the United States as part of the Louisiana Purchase in 1803. In 1812, the Territory of Missouri was formed, containing all of the Louisiana Purchase except the modern state of Louisiana. To manage this expansive and sparsely populated territory, counties were formed. New Madrid County, Missouri covered much of southeastern Missouri and the northern part of Arkansas. This county was eventually subdivided into Lawrence County, which was later subdivided into Izard County. [6]

Marion County was formerly home to a large zinc mining industry. The ruins of the Rush Creek mining district are preserved as the Rush Historic District, which is listed on the National Register of Historic Places. 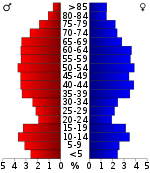 The county government is a constitutional body granted specific powers by the Constitution of Arkansas and the Arkansas Code. The quorum court is the legislative branch of the county government and controls all spending and revenue collection. Representatives are called justices of the peace and are elected from county districts every even-numbered year. The number of districts in a county vary from nine to fifteen, and district boundaries are drawn by the county election commission. The Marion County Quorum Court has nine members. Presiding over quorum court meetings is the county judge, who serves as the chief operating officer of the county. The county judge is elected at-large and does not vote in quorum court business, although capable of vetoing quorum court decisions. [15] [16]

Over The past few election cycles Marion County has trended heavily towards the GOP. The last democrat (as of 2016) to carry this county was BIll Clinton in 1996.

Property tax is assessed by the Marion County Assessor annually based upon the fair market value of the property and determining which tax rate, commonly called a millage in Arkansas, will apply. The rate depends upon the property's location with respect to city limits, school district, and special tax increment financing (TIF) districts. This tax is collected by the Marion County Collector between the first business day of March of each year through October 15th without penalty. The Marion County Treasurer disburses tax revenues to various government agencies, such as cities, county road departments, fire departments, libraries, and police departments in accordance with the budget set by the quorum court.

Note: Unlike most Arkansas counties, Marion County only has one single township (named "Marion County"). That township encompasses the entire county.

Townships in Arkansas are the divisions of a county. Each township includes unincorporated areas; some may have incorporated cities or towns within part of their boundaries. Arkansas townships have limited purposes in modern times. However, the United States Census does list Arkansas population based on townships (sometimes referred to as "county subdivisions" or "minor civil divisions"). Townships are also of value for historical purposes in terms of genealogical research. Each town or city is within one or more townships in an Arkansas county based on census maps and publications. The townships of Marion County are listed below; listed in parentheses are the cities, towns, and/or census-designated places that are fully or partially inside the township. [20] [21]