Table of Contents ⇨
For the ship of the same name, see Manistee (shipwreck).
City in Michigan, United States 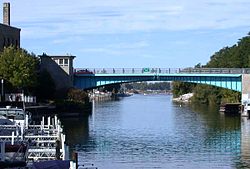 Manistee is a city in the U.S. state of Michigan. The population was 6,226 at the 2010 census. It is the county seat of Manistee County. [6] The name "Manistee" is from an Ojibwe word first applied to the principal river of the county. [7] The derivation is not certain, [8] but it may be from ministigweyaa, "river with islands at its mouth". [9] [10] Other sources claim that it was an Ojibwe term meaning "spirit of the woods". [11]

Manistee Township is located to the northeast of the city, but is politically separate. The city is located at the mouth of the Manistee River on Lake Michigan.

In 1751, a Jesuit Mission was established in Manistee. [12] Missionaries visited Manistee in the early 19th century, and a Jesuit mission house is known to have been located on the NW shore of Manistee Lake in 1826. In 1832, a group of traders from Massachusetts built a log house up the Manistee River. However, they were soon driven off by the Odawa nation. The first white settlement and sawmill was built there in 1841. [12]

In 1830 the village of Manistee was one of about 15 Odawa ( Ottawa) villages along the shore of Lake Michigan. Much of the Manistee River Valley, including Manistee itself, was designated as an Odawa Reservation from 1836-1848. [13]

The first permanent Euro-American settlement was made on April 16, 1841, when John Stronach and his son, Adam Stronach, arrived at the mouth of the Manistee River in a schooner loaded with fifteen men and equipment, and established a saw mill. [14] 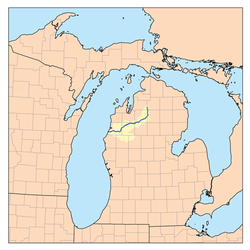 From 1836-1848, much of the Manistee River Valley, including Manistee itself, was an Ottawa Reservation. During the lumbering era of the late 1800s, Manistee became a significant site for lumber mills. Huge numbers of white pine logs were floated down the river to the port at Manistee and eventually on to the lumber markets of Grand Rapids, Milwaukee and Chicago.

In 1846, the town was named "Manistee"; it was made part of Ottawa County, whose county offices were 100 miles away at Grand Haven. After a series of new counties were organized, by 1855 Manistee was part of a large Manistee county that also included modern-day Manistee, Wexford, and Missaukee counties. [15]

On October 8, 1871, the town was practically destroyed by fire; on the same day that the Peshtigo Fire, the Great Chicago Fire, and fires in Port Huron and Holland occurred, the Great Michigan Fire burned Manistee. [16] Manistee was incorporated as a city in 1882. [17]

In 2000, Manistee made national headlines after a local jury convicted a woman for expressing privately to her mother her wish that immigrants would learn English; the judge described it as "insulting conduct" consisting of " fighting words", an offense that was punishable under a local ordinance. Allegations appeared of improper procedure and irregularities in the court records. Two years later (November 1, 2002) and after the defendant spent four nights in jail, the conviction was overturned by the state Court of Appeals. [18] [19] [20] [21]

There were 2,816 households of which 26.2% had children under the age of 18 living with them, 39.1% were married couples living together, 13.4% had a female householder with no husband present, 4.9% had a male householder with no wife present, and 42.7% were non-families. 36.4% of all households were made up of individuals and 14.7% had someone living alone who was 65 years of age or older. The average household size was 2.18 and the average family size was 2.82.

There were 2,912 households out of which 27.5% had children under the age of 18 living with them, 42.8% were married couples living together, 12.3% had a female householder with no husband present, and 40.6% were non-families. 35.1% of all households were made up of individuals and 17.8% had someone living alone who was 65 years of age or older. The average household size was 2.24 and the average family size was 2.88.

In the late 19th century, Manistee was one of the leading shingle manufacturing cities in the world, with over 30 shingle mills on the Manistee river at one time. During the lumber boom of the 1880s, Manistee was the headquarters of its own railroad, the Manistee and North-Eastern, and had more millionaires per capita than anywhere else in the United States. [26]

Manistee is also associated with the salt industry. Manistee is now the home of three factories on Lake Manistee; Packaging Corporation of America, Morton Salt, and Martin Marietta. The town is also a local favorite for tourism and fishing.

Manistee is home to a radio station, WMTE-FM (101.5), and was previously home to the now-defunct WMTE (1340 AM). The Ludington Daily News, Manistee News Advocate and Traverse City Record-Eagle cover the Manistee area and distribute daily newspapers in the city.

Manistee has museums, an opera house, and recurring events. [30] These include:

The SS City of Milwaukee, a retired railroad car ferry, in Manistee harbor

Manistee has a historic downtown with many original buildings from the Victorian era. The entire Downtown District is listed on the National Register of Historic Places. There are a good variety of retail stores in Manistee, many of which are locally owned and operated.

The Michigan Department of Corrections Oaks Correctional Facility is in Manistee Township, near Manistee. [50] [51]

The Manistee Saints are a semi-professional baseball team that have called Manistee home since 1934. Their home games are at Rietz Park in Manistee. Formerly, the Manistee Colts and the Manistee Champs played in the Michigan State League, a minor league baseball league.

There are many golf courses located around the city of Manistee.

There are also two ski resorts near the city of Manistee.

There are many disc golf courses, mountain biking trails, and hiking trails all over Manistee County and in the city of Manistee.