Table of Contents ⇨
This article is about the Oregon county. For other uses of the word "Malheur", see Malheur.
U.S. county in Oregon

Malheur County /mælˈhɪər/ is a county in the southeast corner of the U.S. state of Oregon. As of the 2010 census, the population was 31,313. [1] Its county seat is Vale, [2] and its largest city is Ontario. The county was named after the Malheur River, which runs through the county. The word "malheur" is French for misfortune or tragedy. [3]

Malheur County was created February 17, 1887, from the southern portion of Baker County. It was first settled by miners and stockmen in the early 1860s. The discovery of gold in 1863 attracted further development, including settlements and ranches. Basques settled in the region in the 1890s and were mainly engaged in sheep raising.[ citation needed]

Pillars of Rome, near Rome 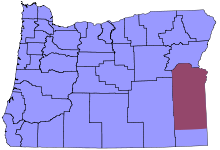 Most of Malheur County (shown in red) is in the Mountain Time Zone; a small portion in the southern part of the county is in the Pacific Time Zone along with the rest of the state of Oregon and neighboring Nevada.
Further information: Time in Oregon

Malheur County is one of the few counties in the United States with two time zones. Most of the county is in the Mountain Time Zone, but a small portion in the south is in the Pacific Time Zone.

Like all counties in eastern Oregon, the majority of registered voters who are part of a political party in Malheur County are members of the Republican Party. In the 2008 presidential election, 69.10% of Malheur County voters voted for Republican John McCain, while 28.47% voted for Democrat Barack Obama and 2.42% of voters voted for a third-party candidate. These statistics do not include write-in votes. [18] These numbers show a small shift towards the Democratic candidate when compared to the 2004 presidential election, in which 74.9% of Malheur Country voters voted for George W. Bush, while 23.8% voted for John Kerry, and 1.3% of voters either voted for a third-party candidate or wrote in a candidate. [19]

Malheur County is one of the most Republican counties in Oregon when it comes to Presidential elections. It was one of only two counties in Oregon to give the majority of its vote to Barry Goldwater and has favored the Republican candidate for decades. [20] The last Democratic candidate to carry the county was Franklin D. Roosevelt in 1940. [21] Further every Republican candidate since 1996 has received more than 60% of the county's vote. [22] Malheur County is also one of the most reliably Republican counties in state elections, for example in the 1998 gubernatorial election it was the only county to vote for Bill Sizemore instead of John Kitzhaber, and in the 1998 U.S. Senate election, it was the only county to vote for state senator John Lim over Ron Wyden.

The county is 94% rangeland, with the Bureau of Land Management (BLM) controlling 72% of the land. Irrigated fields in the county's northeast corner, known as Western Treasure Valley, are the center of intensive and diversified farming. Malheur County's economy also depends on tourism.

The county's two largest employers are the Heinz Frozen Food Company of Ontario, a potato processor branded as Ore-Ida, and the Snake River Correctional Institution, five miles northwest of Ontario. [12] 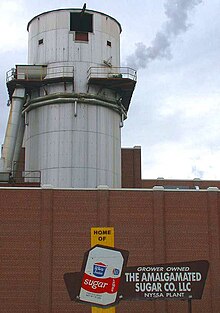 A sugar beet plant of the Amalgamated Sugar Company in Nyssa