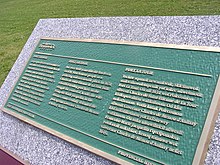 Plaque in French, English, and Malecite at Fort La Tour

Malecite–Passamaquoddy (also known as Maliseet–Passamaquoddy) is an endangered Algonquian language spoken by the Maliseet and Passamaquoddy peoples along both sides of the border between Maine in the United States and New Brunswick, Canada. The language consists of two major dialects: Malecite, which is mainly spoken in the Saint John River Valley in New Brunswick; and Passamaquoddy, spoken mostly in the St. Croix River Valley of eastern Maine. However, the two dialects differ only slightly, mainly in accent. Malecite-Passamaquoddy was widely spoken by the indigenous people in these areas until around the post- World War II era, when changes in the education system and increased marriage outside of the speech community caused a large decrease in the number of children who learned or regularly used the language. [3] As a result, in both Canada and the U.S. today, there are only 600 speakers of both dialects, and most speakers are older adults. [4] Although the majority of younger people cannot speak the language (particularly the Passamaquoddy dialect), there is growing interest in teaching the language in community classes and in some schools. [3] [5]

Additionally, the standard orthography uses an apostrophe (') to represent word-initial consonants that are no longer pronounced due to historic sound changes. It occurs only word-initially before p, t, k, q, s, or c. These "missing consonants" can appear in other forms of the word. For example, the stem ktomakéyu produces the word 'tomakéyu "s/he is poor" (where the apostrophe indicates that the initial k has been dropped) as well as the word nkótomakey "I am poor" (where the k remains pronounced because it occurs after the pronoun n-). [3]

(When o appears before w, it is written as u to reflect the rounding of the vowel due to the influence of the w). (/e/ may also be pronounced as /ɛ/).

There are many phonological processes that occur in Malecite-Passamaquoddy, the most important of which are outlined below:

Every phoneme except "o" and "h" can occur initially, medially, or finally; "o" and "h" are never word-final. Clusters of two obstruents, geminate consonant pairs, and clusters of a sonorant followed by an obstruent are all common. Consonant clusters ending in a sonorant usually don't occur except in geminate pairs or when they occur initially through the use of one of the personal pronoun prefixes. Clusters of three consonants can occur, and are almost always of the form CsC. [6]

The most basic and common syllable structures are CV and CVC.

In addition to stress rules, there are also rules that assign pitch to some syllables based on their position in the words. As LeSourd describes, Passamaquoddy stressed syllables can be relatively high-pitched or low-pitched, and final unstressed syllables can be distinctively low-pitched. [6] Maliseet has similar pitch assignments, but again, differs from Passamaquoddy in ways which serve to distinguish the two dialects.

There are four categories of words in Maliseet-Passamaquoddy: nouns, pronouns, verbs, and particles; every type except particles are inflected. Like other Algonquian languages, Maliseet-Passamaquoddy is polysynthetic, often combining many morphemes into one word unit. It is also fairly agglutinative, with many morphemes generally corresponding to a single unit of meaning. [7]

A basic characteristic of Maliseet-Passamaquoddy is that all nouns and pronouns have noun classes: Like other Algonquian languages, nouns are either animate or inanimate. All abstract nouns (such as "prayer", "happiness", "the past") are inanimate; people, personal names, animals, and trees are all animate. There is not a perfect correspondence between the inherent "animateness" of a noun and its class for all words, however: the words for "fingernail" and "knee" are animate, but the words for "heart" and "tongue" are inanimate. [3] Verbs impose restrictions on the noun class that one of their arguments must be. The easiest way to distinguish animate and inanimate nouns is by their plural forms. Animate plural nouns end in -k, and inanimate plural nouns end in -l.

In addition to class and number, animate nouns and pronouns (except "I," "we," and "you") are marked in sentences as either proximate or obviative. Inanimate nouns are never marked as obviative. Proximate nouns refer to something that is near the speaker or most central to the discourse, whereas obviative nouns refer to something that is distanced or more remote from consideration. When two nouns or pronouns are conjoined, they can both be proximate or both obviative. In all other cases, when two or more animate nouns or pronouns appear in the same clause, one will be proximate (the focus of the clause) and the others will be obviative. Proximate is the "default" noun ending; obviative forms use different endings.

Additionally, nouns can also be inflected for the absentative, locative, and (with some nouns) vocative cases. The Passamaquoddy-Maliseet Language Portal includes a chart showing all the possible declensions of nouns in various forms. Notably, the absentative case is marked not only with endings, but also changes in pitch contour.

Nouns can also be marked with diminutive and/or feminine suffixes. When these are combined with case markings, the order of suffixes is as follows:

Nouns can be used in apposition with other nouns and function like adjectives (which do not exist as a separate class of words).

Participles can be formed from the Changed Conjunct form of a verb and use the special plural endings -ik (animate) or -il (inanimate).

There are five types of pronouns: personal, demonstrative, interrogative, the word "other", and a hesitator/ filler pronoun.

Personal pronouns differ from nouns and other pronouns in that they do not use plural markers but instead each form is unique. The third person is gender-neutral and there are both inclusive and exclusive forms of the second person plural pronoun. The first and second person singular also have longer emphatic forms:

There are three demonstrative pronouns, which have both animate and inanimate forms and are inflected for number, obviation, and absentativity:

The word kotok "another, other" is a pronoun that also has animate and inanimate forms that can be inflected with various endings.

One of the most interesting features is the pronoun that functions similarly to English "uh..." or "er...", but which is inflected to match the anticipated word. Compare the bolded pronoun in:

Verbs are built from word stems, which consist of one or more roots. Roots can be initial, medial, or final, and can be combined to build rich levels of meaning into a verb:

Verbs are classified by the final root in their stem, which marks them as transitive or intransitive. Some verbs that have a direct object when they are translated into English are in reality intransitive verbs where the noun has been incorporated into the verb: posonut•ehk•e (basket-do.AI-3.sg) "he/she makes baskets".

Because Maliseet-Passamaquoddy is polysynthetic, a large amount of grammatical information is expressed in one verb through the use of various inflections and affixes:

The possible modes and how they are used in sentences are:

The possible tenses are:

Particles are all the words in the language that aren't inflected. They include:

Because of the polysynthetic nature of verbs, subjects and objects are often not separate words but rather affixes attached to the verbs; therefore, one word "sentences" are possible and even common.

Maliseet-Passamaquoddy, along with other Algonquian languages, is also a direct–inverse language, which means the subjects and objects of transitive verbs are marked differently in different contexts according to where they fall relative to each other on a "person hierarchy". The person hierarchy lays out which word is considered more salient or takes precedence over another form. Leavitt's grammar gives the following hierarchy:

Some first- and second-person pronouns overlap in meaning; for example kilun "we (inclusive)" includes within its meaning nil "I". Overlapping pairs of this sort cannot be used as the subject-object pair of a transitive verb. Leavitt gives the following chart outlining the restrictions on how first- and second-person subject-object pairs can occur for transitive verbs:

(R means that a form will be reflexive or reciprocal and intransitive; -- means a combination is not allowed.)

Because so much grammatical information is encoded in each word, word order is very free, and there are few restrictions on the order words can appear, especially in simple one-verb sentences. One of the only restrictions is that the negative particle must precede the verb, but other words may intervene. [3]

There is no word for the verb "to be" in the language so identity sentences with no verb are possible. The word order is less free than in sentences with verbs and is fixed in negative identities.

Complex and compound sentences with two or more verbs can be created in multiple ways, such as these:

Today Maliseet-Passamaquoddy has a ranking of 7 on the Expanded Graded Intergenerational Disruption Scale (EGIDS); a 7 corresponds to "Shifting: The child-bearing generation can use the language among themselves, but it is not being transmitted to children." [4] However, in spite of this bleak assessment, there are significant efforts to revitalize the language and teach both children and adults who did not learn the language natively.

Since 2006, a project known as Language Keepers, which attempts to document endangered languages and increase public group discourse carried out in these languages, has worked with the Passamaquoddy and Maliseet communities and done extensive documentation of the language. In their first three years of work, they filmed over 50 hours of natural group conversation with 70 speakers, which led to the production of eight DVDs in Maliseet-Passamaquoddy subtitled in English. [8] According to the Passamaquoddy-Maliseet Language Portal, this film "stimulated language revival programs for people who understand but cannot speak, and identified new sources of resiliency and leadership in the language-speaking community." [8] Their approach to documentation is fairly novel and has garnered praise: "In contrast to 'elicitation,' in which linguists ask speakers questions to learn about a language, Language Keepers videos show how the language works in practice, and have provided many "new" words for the dictionary. They also document traditional Passamaquoddy culture-activities, like canoe-building, and views of the world." [9]

In addition to the film, the Language Keepers project—along with other linguists and community activists—has helped compile the Passamaquoddy-Maliseet Dictionary, which was started in the 1970s by linguists Philip LeSourd and today includes over 18,000 entries, many of which include audio and video files of native speaker pronunciations.

Along with the various resources available online, recent revitalization efforts have included Maliseet-Passamaquoddy classes being taught at the University of New Brunswick, with efforts to increase inter-generational communication and transmission of knowledge and culture.