The airport is owned by the Puerto Rico Ports Authority and managed by Aerostar Airport Holdings, a public–private partnership which was awarded a lease by the government of Puerto Rico to operate and manage the airport for 40 years beginning in 2013. [6] SJU is the second international airport to be privatized in the United States or its territories, and, as of 2013, is the only currently privatized airport in the nation. [7] Taxis and rental cars can transport travelers to and from the airport. The airport serves as a gateway to the Caribbean islands. SJU covers 1,600 acres (647 ha) of land. [1]

In 1945, aware of the importance of aviation for the development of the economy of Puerto Rico, the island government had pointed out the need to build a newer international airport capable of handling the growing air traffic of San Juan International Airport, in Isla Grande, that had been operating since 1929; as well as responding to the needs of the future. Until then Isla Grande had been the main airport of Puerto Rico. As airlines began switching from propeller aircraft to jets, the 4,000-foot Isla Grande airstrip did not have the necessary distance for modern aircraft to land and take off. (The Isla Grande Airport, now named in honor of Maj. Fernando Luis Ribas Dominicci, Pilot of the US Air Force F-111, who was killed-in-action in Libya in 1986, currently has a runway of 5,542 feet in length.)

On the other hand, the government had also decided that it should direct the air operations, relying these powers in the Puerto Rico Transportation Authority, created in 1942, which later became the Ports Authority. The Committee of Airports of the Planning Board began to study the feasibility of the new airport, submitting in 1944 its plans and studies to the Federal Civil Aeronautics Administration, to determine the most appropriate place.

In 1945, it was determined that the place would be Isla Verde (Carolina), to make the airport a metropolitan facility. Construction was approved by the Puerto Rico Planning Board in 1946, and the project began in 1947. During that same year, the Port Authority of Puerto Rico assumed title to and ownership of the Isla Grande Airport and other regional airports, which had been military installations during World War II.

The design of the new airport was carried out by the firm of Toro-Ferrer, founded by the architects Miguel Ferrer (1914–2004), and architect Osvaldo Toro (1914–1995), which were also known for their designs of the Caribe Hilton Hotel and the Supreme Court of Puerto Rico.

During 1949, the first phase of construction of the Isla Verde Airport was completed: cleaning, filling, leveling and drainage of soils. The second phase also began: paving the runway, taxiways, and platforms.

The certified airlines operating in Puerto Rico in 1950 were Pan American World Airways, Eastern Air Lines, Riddle Aviation Co., Caribbean Atlantic Airlines, British Airways, Iberia, Dominican Airlines and Flying Tigers Airline. The latter contracted the movement of migrant workers to the United States, with the Insular Department of Labor, transferring some 5,706 workers to different points of that nation, at a cost of $55 per passage.

On May 22, 1955, the Puerto Rico International Airport was inaugurated, built on a 1,718.72 acre land lot. The facilities, estimated at a cost of $22 million, had a six-story passenger terminal, control tower, 7,800-foot-long runway (8–26), cargo building, fire and police stations, and a hotel.

Hundreds of people, enthusiastic about the new aerial installation, witnessed the inaugural events presided over by Luis Muñoz Marín. In a part of his eloquent speech, the Governor said: "Impressive is this work in its structure and in its many facilities, but not as impressive as the fact that this center of communications symbolizes the great technical processes that are transforming civilization".

The first year of operations of the new airport produced an upward movement of passengers to 694,199 and a total of 28 million pounds of cargo was handled.

Evolution of the airport

By 1959, major airlines had introduced jets, which significantly reduced flight time and increased flight cruising safety. At the start of operations, the airport had only one runway (8/26), the old control tower on top of the Hotel, 3 terminals and a parking lot for 200 cars.

During the beginning of the 60s, several expansion and improvement projects began, starting with the runway extending from 7,800 to 10,000 feet in length. Construction of the second runway (10–28) on the south side began in May 1967. The project was completed in 1974 at an approximate cost of $4.2 million. With the introduction of the 747 aircraft, runway 8–26 was reinforced and widened in 1974, and ten years later it was repaved. 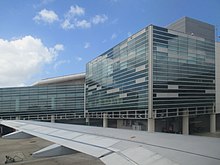 Terminal facade view from the tarmac

On January 17, 1983, the two-leveled vehicular access system was built at a cost of approximately $9.2 million. This access separates the arrivals and departures of passengers at different levels, to eliminate traffic congestion.

On February 18, 1985, the Governor of Puerto Rico, Rafael Hernández Colón, converted to law the project to Senate Number 1, officially designating the international airport under the name of Luis Muñoz Marín, in honor of the first governor of Puerto Rico elected by the people.

The airport served as a hub for Pan Am, Trans Caribbean Airways, Eastern Air Lines, and for a short period a focus city for TWA. It was also the center for Puerto Rico's international airline, Prinair, from 1966 to 1984, when Prinair went bankrupt. In 1986, American Airlines together with American Eagle established a center in Puerto Rico to compete with Eastern Air Lines. 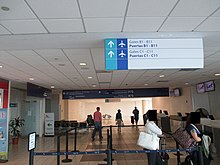 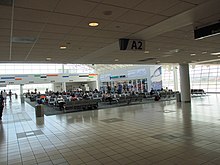 Waiting area at Gate A2

With the expansion of Eastern Airlines and American Airlines facilities, turning Puerto Rico into their Caribbean hub, the historic figure of eight million passengers at the end of 1988. That same year, an investment in expansion and remodeling of $137 million was announced.

The 1990s marked the beginning of important projects to modernize and expand the facilities and services of the airport in response to the boom in passenger and cargo movement and growth projections.

In the period from 1990 to 2000, several infrastructure works were carried out with an investment of approximately $128 million. Some of these include the expansion of the two-level access road to a maximum of 10 lanes on both levels, the new air traffic control tower (designed by Segundo Cardona FAIA of SCF Architects [8]), a parallel taxiway connecting lanes 8 and 10, a parking garage, and the first and second phase of the Terminal B expansion, modification, and rehabilitation project.

In subsequent years, from 2000 to 2005, other major projects were initiated and completed such as the third phase of the rehabilitation, modification and expansion of Terminal B and the new B / C connector at a cost of $35.9 million, the construction of a new building for the Air Rescue unit at a cost of $4.1 million, and remodeling the hotel at a cost of $5 million.

In 2008 the airport has been receiving major upgrades, including a new terminal (Terminal A), pavement and expansions, new light systems, press conference rooms, and new fast food restaurants along its corridors. In 2012, the new Terminal A was opened, which is currently occupied by JetBlue Airways. [9]

The Airport is owned by the Ports Authority but since 2013 it is managed by Aerostar Airport Holdings, in a private public initiative through which a contract was granted to that company to operate the airport for 40 years. This was after observations were made by politicians in and outside of Puerto Rico, and comments were made that privatization was a better solution for the airport. Prior to privatization, management was changed each time a different political party in Puerto Rico took office and this caused disruption, and a lack of a long-term vision for the airport. [10] 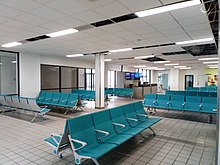 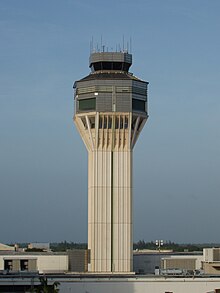 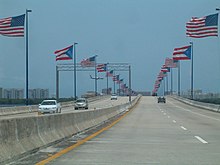 Luis Muñoz Marín International Airport is Puerto Rico's main international gateway and its main connection to the mainland United States. Domestic flights fly between Carolina and other local destinations, including Culebra, Mayagüez and Vieques. The airport is accessed from the San Juan district of Hato Rey, the island's financial district, via the Teodoro Moscoso Bridge. Old San Juan is accessed via the Baldorioty de Castro Expressway ( PR-26). The airport serves as the Caribbean hub for Cape Air, Air Sunshine, and Seaborne Airlines, as well as a focus city for JetBlue Airways. [11] JetBlue is the largest carrier in San Juan, with 51 daily flights on an average day.

Luis Muñoz Marín Airport has one main terminal building with four concourses and a separate terminal with one concourse. However, all terminals are connected.

In June 2012, Terminal A was opened and occupied solely by Jetblue Airways, making San Juan a focus city. When Terminal B was closed for renovations, four regional airlines were moved to Terminal D.

As of November 2018, Jetblue only uses four of the six gates in the terminal, unlike years before when it used all six. Gates A1 and A2 are used by other airlines such as Copa Airlines and Allegiant Air. Seaborne Airlines has also moved their operations to Terminal A from the now-closed Terminal D.

The Lounge San Juan, [12] an All Inclusive[ clarification needed] VIP airport lounge is located in Terminal A.

Terminal B reopened after a $130 million renovation in December 2014, with Delta, United, Southwest, and Spirit as its tenants (with all operations moved in February 2015). [13]

As of November 2018, Terminal B is also used by Air Canada, Allegiant Air, Frontier Airlines and LIAT.

Terminal C reopened from its $55 million renovation on March 2016. [14] The letter designation for Terminal C was discontinued, and the concourse was instead added as an extension to Terminal B. [15] The Terminal B extension was later changed back to Terminal C. [16]

Both Terminals B and C feature high-end retail stores and new restaurants, improved seating as well as automated baggage scanners currently used only by six other airports in the mainland U.S.

An Avianca VIP airport lounge [17] is located at the entrance of Terminal C. This All Inclusive lounge is operated by Global Lounge Network. [18]

Terminal D is partially opened, and mostly used for small aircraft operators, including Cape Air and Liat. The terminal is currently undergoing renovations while it is in operation, and these have not yet affected Gates D7, D8, and D9. Terminal D's ticketing area is currently empty and only used to access the Airport Hotel, and the former security checkpoint is now used for merchandise screening. The terminal was previously occupied by American Airlines and other OneWorld airlines until the departure of the OneWorld airlines in March 2013.