Louisburg is a city in Miami County, Kansas, United States and is part of the Kansas City metropolitan area. [5] As of the 2010 census, the city population was 4,315. [6]

Prior to the American Civil War, the land of what is now called Louisburg was part of an area reserved for members of various tribes of Native Americans who were ceding their lands in Missouri, Illinois, and Indiana. [7] Settling there were the Peoria, Wea, Piankeshaw, and Kaskaskia tribes [8] which together eventually became the Confederated Tribe of Peoria. [7] Traders and missionaries often visited the area, and by 1854 Euro-American farmers began moving nearby, establishing homes. [8] Upon the organization of the state of Kansas in 1861, the Confederated Tribes were being charged with taxes, and the new state laws conflicted with their own. By 1866, following the Civil War, the government moved the Confederated Tribe of Peoria to Oklahoma, [7] and the land they once occupied was sold to settlers. [8] A community of homes resulted by 1867, and was called St. Louis. Soon, it was often referred to as New St. Louis or Little St. Louis in an effort to distinguish it from St. Louis.

From 1868 to 1870, the settlement of Little St. Louis grew to include businesses and churches, and a railroad depot was to be completed. Because the Missouri, Kansas, and Texas Railroad (MKT Railroad) would be coming to serve the community, and to avoid additional confusion, Little St. Louis was renamed Louisburg in 1870. The railroad depot was completed by 1871, and Louisburg's first school opened the same year. [9] The community had some disorder during this time. As a town near the border, there remained conflicts between Kansas Jayhawkers and Missouri Raiders. In addition, the railroad tracks running through the community divided it into north and south areas. Circa 1875, many businesses and homes were moved from north of the railroad to the south, and formed what was to become downtown Louisburg. [10]

Louisburg was incorporated as a city of the third class November 3, 1882, and held its first city election two weeks later on November 17, 1882. The population was listed as 400, and 141 of those residents voted in the first election. [9]

In the early 1900s, Louisburg's downtown had a variety of businesses such as retail stores, supply stores, livery stables, a hotel, [10] and large nurseries. By 1910 the population was 603, and Louisburg was known as a good supply town for agricultural districts. [9] By the 1920s, the town also had a gas station, an automobile ownership and traffic through town had increased. By the late 1950s the MKT Railroad ended its service to Louisburg, but because K-68 went through town and US Highway 69 and K-68 intersected near town, growth continued. [8]

In October 1912, an unsolved murder in the community took place as the town's postmaster at the time, George McElheny, was shot twice by a 12-gauge shotgun at his home. Several people were accused of the murder, including his wife, after she admitted an affair with one of the accused, but after intense trials and no hard evidence the case was dropped, and no one ever admitted to the murder. In later years, the murder was almost forgotten until Joe Towne, one of the community leaders, grew interested in the subject and studied it and interviewed those who remembered the tragic situation and wrote true crime novel, "Tongues on Fire". [11] 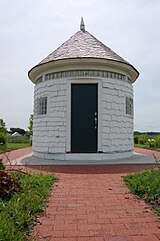 The Little Round House

Along the west side of Louisburg and close to U.S. Route 69 runs part of the Frontier Military Scenic Byway, a 168-mile (270 km)-long route from near Leavenworth, Kansas to the border of Oklahoma. The byway closely follows a road originally built between 1838 and 1844 that was used to transport soldiers and supplies from Fort Leavenworth in Kansas to Fort Scott in Kansas and to Fort Gibson in Oklahoma. [13]

There were 1,583 households of which 41.9% had children under the age of 18 living with them, 58.2% were married couples living together, 11.1% had a female householder with no husband present, 3.2% had a male householder with no wife present, and 27.5% were non-families. 23.6% of all households were made up of individuals and 8.2% had someone living alone who was 65 years of age or older. The average household size was 2.67 and the average family size was 3.19.

There were 946 households out of which 40.7% had children under the age of 18 living with them, 58.8% were married couples living together, 9.8% had a female householder with no husband present, and 27.3% were non-families. 23.6% of all households were made up of individuals and 9.2% had someone living alone who was 65 years of age or older. The average household size was 2.60 and the average family size was 3.09.

Recreation in Louisburg includes several options. The Middle Creek State Fishing Lake is nearby for fishing, and the Louisburg City Lake has a 1.5-mile (2.4 km) paved pathway around it for individuals to walk or jog. Additionally, Louisburg has the Louisburg Aquatic Center for swimming, a 9-hole public golf course, a city park, and the Lewis-Young Park, which has softball, baseball, and soccer fields that are used day and night.

Also located at Lewis-Young Park is the Powell Observatory, which was built in 1984 by members of the Astronomical Society of Kansas City. The observatory's telescopes include one of the largest in the region, which is also one of the few in the nation of its size that is made available for public viewing. The observatory regularly schedules viewings available to the public, and also provides shows that are intended to educate individuals about astronomy. Private viewings can also be scheduled.

Near Louisburg is Rutlader Outpost, which has an RV park for those who camp and an antique store for shopping.

Another unique attraction near Louisburg is Cedar Cove Feline Conservatory & Sanctuary. The big cats such as siberian tigers, who reside in this conservatory aid in teaching people about the wild. In addition, the conservatory allows people to learn how to aid these cats and their relatives who still live afar in the wild. [16]

The Louisburg government consists of a mayor and five council members. The council meets the 1st and 3rd Monday of each month at 6:30PM. [17]

The public schools in the Louisburg Unified School District 416 are: