Turning the place over by Richard Wilson

Liverpool Biennial is the largest international contemporary art festival in the United Kingdom. [1]

Every two years, the city of Liverpool hosts an extensive range of artworks, projects, and a programme of events. The biennial commissions leading and emerging artists to make and present permanent and temporary public artworks, as well as long-term community-based projects. These newly commissioned and existing artworks are presented in diverse locations, including unusual public spaces, unused buildings, as well as the city's galleries, museums, and cultural venues. Cultural organisations in Liverpool provide context for the presentation of contemporary art and culture.

The Biennial exhibition is supported by FACT (the Foundation for Art and Creative Technology), [4] Tate Liverpool, Bluecoat, and Open Eye Gallery. The annual Bloomberg New Contemporaries Exhibition showcases new work by graduates from Fine Art schools in the UK.

Since 2006, the Liverpool Biennial has included 'collateral' events organised and supported by embassies, international agencies, or galleries, and promoted by Liverpool Biennial as a part of the programme. In 2010, for the first time, the biennial offered a platform for exhibitions organised overseas and promoted under the title City States. Visitors to the Biennial spent £27 million total in 2010.[ citation needed]

Liverpool Biennial has a year-round programme of commissioning art for the public realm, such as Richard Wilson's Turning the Place Over and Antony Gormley's Another Place at Crosby Beach. The organizers also promote an ongoing educational programme.[ citation needed]

In 2004, the festival caused controversy by exhibiting a work by Yoko Ono entitled My mummy was beautiful. This was a series of full colour photographs of a woman's breast and crotch, which were exhibited throughout the city centre. Peter Johansson's Swedish red was a one-room house at the Pier Head painted bright red and playing ABBA's record Dancing Queen. The Walker Art Gallery mounted The Stuckists Punk Victorian, the first major show of the Stuckist artists, who had not previously been given official recognition. [5]

In 2006, there were five exhibition strands—International 06, International +, John Moores 24, the Independents and New Contemporaries [6] 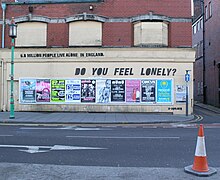 One Year in Liverpool

The theme and title of the Biennial's showpiece International 08 exhibition was "Made Up". [8]

Throughout 2008 as part of Liverpool's year as European Capital of Culture, new commissions for the public realm included Winter Lights (a series of neon lights by international artists, such as Frank Scurti and Michael Pinsky, in collaboration with local communities), Visible Virals ( interventionist artworks in public spaces and buildings in the city), and a series of Pavilions (creating spaces for cultural activity in local communities).

Again there was also the John Moores Painting Prize (No. 25), the New Contemporaries and The Independents.

The 6th biennial in Liverpool was launched with a one night exhibition by Filip Gilissen on 14 May 2010 and ran from 18 September 2010 to 28 November 2010. It contained six programmes of contemporary art including: Bloomberg New Contemporaries, City States, John Moores Painting Prize 2010, S.Q.U.A.T. Liverpool 2010, and The Cooperative.

Displays included works by Alfredo Jaar, Do-Ho Suh and the first UK presentation of any work by Tehching Hsieh. [9]

The visitor centre was located in the former Rapid Hardware shop on Renshaw Street.

For its 7th edition, Liverpool Biennial explored the theme of hospitality, inviting artists and thinkers to bring forth new understandings for our increasingly globalised and complex times. The biennial exhibition, The Unexpected Guest, comprised 62 international artists, and the Cunard Building was used as a venue for the first time. The programme included: Sky Arts Ignition Series, in partnership with Tate Liverpool, a public commission by US artist, Doug Aitken, installed on Albert Dock in a temporary structure designed by David Adjaye; American composer Rhys Chatham, known for his large-scale performance works presented a concert as part of the opening weekend; one of Argentina's most established and internationally renowned artists, Jorge Macchi, presented Refraction in the LJMU Copperas Hill Building; Israeli artist, Oded Hirsch presented Lift a work which appeared to burst through the floor of Liverpool ONE - Liverpool's retail destination.

16 artists' works were shown in The Old Blind School on Hardman St. [11] There were two external works by Carlos Cruz-Diez, [12] including a Dazzle Ship.

The Liverpool Biennial 2016 exhibition was conceived as a series of 'episodes' drawing inspiration from Liverpool's past, present and future, named as Ancient Greece, Chinatown, The Children’s Episode, Monuments from the Future, Flashback, and Software. [15]

Among the locations for Liverpool Biennial 2016 were the Cains Brewery on Stanhope Street, the former ABC Cinema on Lime Street, the Oratory, Toxteth Reservoir, streets, squares, restaurants, a supermarket, and all the key visual art venues in the city including Tate Liverpool, FACT, Open Eye Gallery and Bluecoat. [16] Also presented during the 2016 Biennial are the John Moores Painting Prize 2016 at Walker Art Gallery, Bloomberg New Contemporaries 2016 at Bluecoat, and the Biennial Fringe.