This list of missiles by country displays the names of missiles in order of the country where they originate (were developed), with the countries listed alphabetically and annotated with their continent (and defence alliance, if applicable). In cases where multiple nations have developed or produced a missile, it is listed under each significantly participating nation. Within the lists of each country, missiles are ordered by designation and/or calling name (the latter being especially relevant for Russian/Soviet missiles). In some cases multiple listings are used, in order to provide cross-references for easier navigation.

This is not a list of missiles in operational service by a particular country; nor a list of military rockets. Anti-tank missiles are listed elsewhere

Model of IDAS of the German Navy. 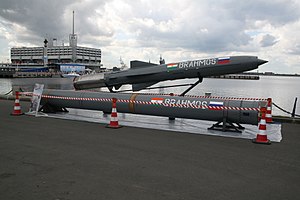 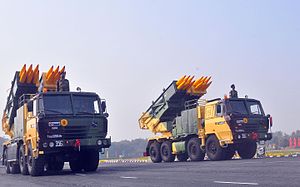 Pinaka MBRL truck
This is a dynamic list and may never be able to satisfy particular standards for completeness. You can help by expanding it with reliably sourced entries.

As of 2009 [update], Iran has an active interest in developing, acquiring, and deploying a broad range of ballistic missiles, as well as developing a space launch capability. In mid-July 2008, Iran launched a number of ballistic missiles during military exercises, reportedly including the medium-range Shahab-3. Iran announced other missile and space launch tests in August and November 2008. In February 2009, Iran announced it launched a satellite into orbit and "officially achieved a presence in space." [10] 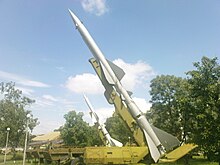 The NATO reporting name of each missile is shown in parentheses behind the proper name.

(Above missile prototypes made by Houwteq, none entered production)

(Above missiles made by Denel Dynamics)

The list of U. S. missiles, sorted by ascending MDS number:

Army: Single numerical sequence until 1948 when the sequence numbers were restarted.

During this timeframe, the U.S. Air Force treated missiles as pilotless aircraft. [24]

The list of missiles sorted by ascending Air Force 1951–1955 designations.

1A version of the Falcon missile was briefly designated the F-104 before it was redesignated as the F-98. [24]

2The X-11 and X-12 designations were assigned to one and three engine test missiles that would have been used to develop a five-engine version of the Atlas missile. [24]

For all basic missions except GAR (which started at 1) the sequence number started after 67 which was the last bomber designation used for guided missiles. [24]

The list of missiles sorted by ascending Air Force 1955–1963 designations.

The list of missiles sorted by ascending Navy 1941 – 1945 designations.

The list of missiles sorted by ascending Army 1941–1947 designations.