Bush visited six continents: Africa, Asia, Australia, Europe, North America, and South America. On one of his two trips to Sub-Saharan Africa, he visited three of the poorest countries in the world at the time: Liberia, Rwanda, and Benin. He also made a secret trip to Iraq on Thanksgiving Day 2003 to dine with the troops. His father had made a similar visit to the U.S. troops in Saudi Arabia in 1990. On November 15–20, 2006, Bush made the third round the world presidential flight (after Johnson and Nixon).

The number of visits per country where he travelled are:

President George W. Bush at the Normandy American Cemetery at Normandy Beach in France, May 27, 2002. 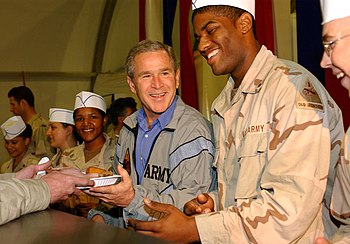 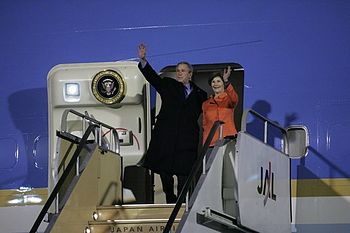 LIST OF INTERNATIONAL PRESIDENTIAL TRIPS MADE BY GEORGE W. BUSH