Lewis County is a county located in the U.S. state of Tennessee. As of the 2010 census, the population was 12,161. [2] Its county seat is Hohenwald. [3] The county is named for explorer Meriwether Lewis, who died and was buried at Grinder's Stand near Hohenwald in 1809. 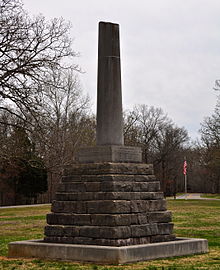 Lewis County was formed in 1843 from parts of Perry, Hickman, Lawrence, Maury and Wayne counties. [1] It was named for explorer Meriwether Lewis of the Lewis and Clark expedition. [4] Lewis's grave is located at the geographic center of the county. The bill for its creation was proposed by Powhatan Gordon in the Tennessee State Senate. [5]

On October 7, 2009, a ceremony was held at the cemetery to commemorate the bicentennial of Lewis's death. A bust of Lewis was presented to the National Park Service, which manages the site. [6]

Lewis County was the site of the Cane Creek Massacre. 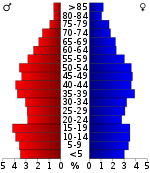 Historically, like all of secessionist Middle Tennessee, Lewis County was overwhelmingly Democratic. Although it did vote for Charles Evans Hughes in 1916 and Warren G. Harding in 1920, Lewis County would be firmly Democratic for the next six decades, being one of only two Tennessee counties to remain loyal to both Hubert Humphrey in 1968 and George McGovern in 1972. Ronald Reagan broke this Democratic sequence with a 177-vote majority over Walter Mondale in his 1984 landslide, but Lewis County would subsequently remain Democratic up to 2000. Since then, however, like all of the rural white South, it has become overwhelmingly Republican due to opposition to the Democratic Party’s liberal views on social issues. [16]

The County is served by Lewis County High School.