From Wikipedia
https://en.wikipedia.org/wiki/Les_Francofolies_de_La_Rochelle Jump to search

Scene from main stage at Francofolies (2007). 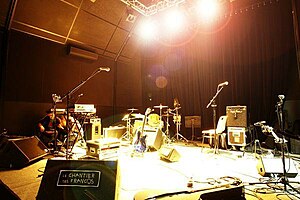 Les Francofolies de la Rochelle is an annual music festival founded in 1985 in La Rochelle, France as an initiative of Jean-Louis Foulquier. It is usually held annually in July and aims at promoting francophone music.

Number of those attending the festival has exceeded 160,000 in 2007. Founder Jean-Louis Foulquier went on to establish Les FrancoFolies de Montréal in 1989.