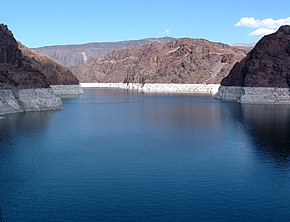 Lake Mead from the Hoover Dam

Lake Mead National Recreation Area is a U.S. National Recreation Area located in southeastern Nevada and northwestern Arizona. Operated by the National Park Service, Lake Mead NRA follows the Colorado River corridor from the westernmost boundary of Grand Canyon National Park to just north of the cities of Laughlin, Nevada and Bullhead City, Arizona. It includes all of the eponymous Lake Mead as well as the smaller Lake Mohave – reservoirs on the river created by Hoover Dam and Davis Dam, respectively – and the surrounding desert terrain and wilderness. [4]

Lake Mead NRA features water recreation, including boating, swimming, and fishing, on both lakes as well as the stretches of river between the lakes. It also features hiking trails and views of the surrounding desert landscape. [7] Three of the four desert ecosystems found in the United States — the Mojave Desert, the Great Basin Desert, and the Sonoran Desert — meet in Lake Mead NRA. Tours of Hoover Dam – administered by the U.S. Bureau of Reclamation – are also a major attraction within the recreation area. [6] [8]

The ghost town of St. Thomas, Nevada is contained entirely within Lake Mead NRA. The town, once entirely submerged beneath Lake Mead, features a two-mile-long loop trail with interpretative signage. It is accessed near the Northshore Entrance Station, just south of Overton.

There are currently nine officially designated wilderness areas under the National Wilderness Preservation System lying within Lake Mead National Recreation Area. All are in the Nevada portion. Parts of some of these wildernesses (as indicated) lie outside Lake Mead NRA and are managed by the Bureau of Land Management: [11]

Lakes Mead and Mohave offer some of the country’s best sport fishing. The following species are found in both lakes: [6] 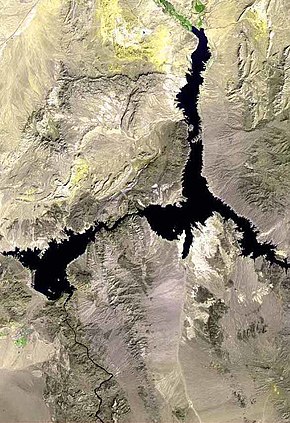