LDS Business College (LDSBC) is a private two-year college in Salt Lake City, Utah that is focused on training students in business and industry knowledge. The college is owned by The Church of Jesus Christ of Latter-day Saints (LDS Church) and operates under its Church Educational System. LDSBC offers one year certificates and two-year degrees in business, interior design, healthcare, and other areas. LDSBC also includes an Institute of Religion and is accredited by the Northwest Commission on Colleges and Universities. [6] On February 25, 2020, it was announced that the institution's name will be changed to Ensign College, effective September 1 2020. [7]

The Latter-day Saints' University in 1905. 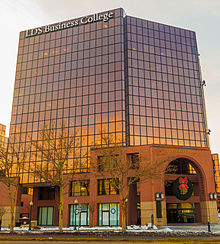 Current home of the college at the Triad Center in Salt Lake City. 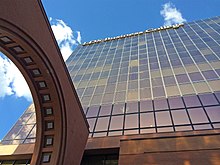 The Salt Lake Academy was founded in 1886, with high school, normal, business and college courses of study. The school had 84 students upon its opening. [8] In 1888, it was renamed the Salt Lake Stake Academy, and a year later it was again renamed, this time Latter-day Saints' University. By 1895 was offering a four-year course of study culminating in a Ph.B. degree.

Latter-day Saints never became a fully functioning university and was displaced as the preeminent LDS higher learning center by Brigham Young University in the early 20th century. The college was closely linked with Latter-day Saints High School, which counted among the graduates George W. Romney (1926) and Gordon B. Hinckley (1928).

In 1927, the name of LDS University was changed to LDS College and then to LDS Business College, as the other higher-education functions were gone. Two of the school's presidents were James E. Talmage and Bryant S. Hinckley. [9] [10]

For many years, LDSBC was located in a former mansion east of the Salt Lake Temple, at 411 East South Temple. As part of the LDS Church's efforts to revitalize downtown Salt Lake City, LDSBC moved to the Triad Center in 2006. [11]

Russell M. Nelson, the LDS Church's current president, initially took classes at LDSBC but later transferred to the University of Utah to complete his studies. [12]

LDSBC states that its mission is to develop capable and trusted disciples of Jesus Christ. [13]

Effective September 1, 2020, LDSBC will be renamed Ensign College. In Fall 2021, the institution will begin offering a limited-number of four-year bachelor of applied science degrees. [14]

The following is a list of former presidents of LDS Business College: [15]