The Missouri River is known as the "Big Muddy" due to its high sedimentation loads. The Missouri River drains approximately one-sixth of the United States and its basin encompasses 529,350 square miles (1,371,000 km2). During the pre-development period, the Missouri River represented one of North America's most diverse ecosystems. 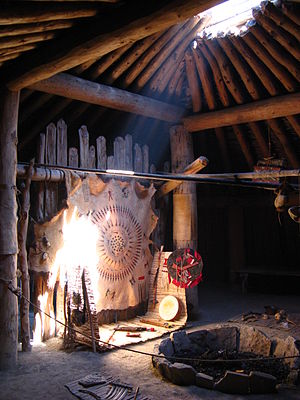 Interior of the Earth Lodge

Sakakawea (Sacagawea) lived in one of the villages of the Knife River. The presence of Sakakawea and her son on the Lewis and Clark expedition was extremely crucial to the safety of the party and the success of their mission. In addition to her ability to translate for them, tribes who encountered the party believed that the presence of the young woman and child indicated they were not a threat. This is due to the fact that war parties did not allow women and children to accompany them.

The Knife River Villages served as an important major central trading and agricultural area. The Native Americans served as middlemen in a trading area that stretched from Minnesota, to the Great Plains and Gulf Coast, and the Northwest Pacific Coast. Their trading business largely consisted of furs, guns, and metals such as copper, but the Hidatsa and Mandan traded corn and other agricultural products.

The Knife River villages thrived until 1837, when a series of smallpox outbreaks nearly wiped out the population; [2] they suffered a 50% loss in population. Gradually survivors of the Mandan, Hidatsa, and Arikara villages migrated north and developed the village of Like-a-Fishhook.

The smallpox outbreaks from 1837–1840 had a 90% death rate among the Mandan. The two Mandan villages that had been in contact with Lewis and Clark suffered the horrific effects of the virus. [3] [4] The smallpox outbreak lasted from 1837–1838 and, out of 1,600 Mandan villagers, 31 survived. The smallpox epidemic was largely spread through the trading business. Despite warnings of outbreaks, Native Americans still visited trading posts and became exposed to the virus. Once the infected Mandan villages were empty, neighboring peoples raided the village for goods, but suffered after carrying back the virus via blankets, horses, and household tools. 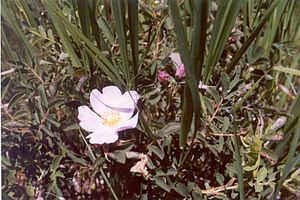 Over the hundreds of years that the Native Americans occupied this area, a very different landscape existed than what can be observed today. When occupied by the tribes, the upland areas were a mixed prairie region that contained a minimal number of trees. The floodplain forests in the river bottomlands were rich and fertile. This fertile area was cleared and used by the Native Americans in the cultivation of such crops as corn, beans, squash, and sunflowers. Trees such as green ash, cottonwood, American elm, and box elder were common in the bottomlands. Other smaller trees and shrubs such as sandbar willow, red osier dogwood, and buffalo berry were also common.

In 1974, as an effort to preserve the historic value and beauty as it once appeared, the area surrounding the park was transformed back to how it originally looked when the Native Americans occupied the area. The area now contains native short grass prairies, exotic grasslands, 450 acres (1.8 km2) of hardwood forest, cultural village sites, wetland areas and sandbars.

Within some areas of the park, the forest composition has changed very little. A few prairie areas contain wheatgrass, needlegrass, grama, and big bluestem grasses and many forbs and flowers. Native wildlife feed on plants such as choke cherry, wild plums, buffaloberry and Juneberry.

The various vegetative communities within the park are home to many species of wildlife. The surrounding forests are home to white tailed deer, coyotes, beavers, skunks, prairie pocket gophers and thirteen-lined ground squirrels. The park is also home to a large variety of birds. Game birds found here include turkeys, pheasants, Canada geese and mourning doves. Raptors such as owls, red-tailed hawks, bald eagles and kestrels can be spotted. Other birds surrounding the rivers that can be viewed here are white pelicans, snow geese, and great blue herons. The Missouri and the Knife Rivers are home to twenty–six known species of aquatic mollusks within the park.

Within the park limits, insect species are being collected and analyzed. Over 200 different species of invertebrates have been identified. The most common order of insects found here include Coleoptera (beetles), Diptera (flies), Hemiptera (true bugs) Homoptera (leaf hoppers), and Hymenoptera (bees, wasps and ants). Many of these insects are crucial to the diet of park wildlife.

As with everywhere else, the park struggles with the management of exotic invasive species. Exotic plants first appeared when Native Americans and Euro-Americans cleared the forests. Many exotic plants are introduced accidentally but a few were planted deliberately. Exotic plant species include leafy spurge, Canada thistle and sweet clover. The park is currently conducting an inventory and monitoring program to gather information on the plant and animal species present within the park. From this information, the managers will be able to best decide how to manage and control the exotic invasive plants. 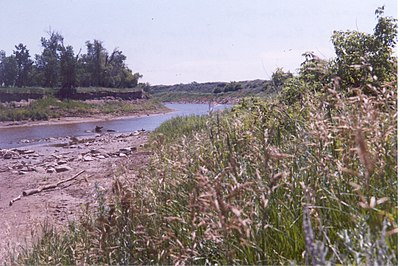 The Knife River just south of the main village complex

During the summer months, the temperature may reach the upper 80's with relatively low humidity and variable winds. The annual average temperature is 40 °F (4 °C). The winter months may bring below-zero temperatures. This area receives approximately 16 inches (410 mm) of precipitation a year.