Kimball Union Academy is a private boarding school located in New Hampshire. Founded in 1813, it is the 22nd oldest boarding school in the United States. [1] The academy's mission is to "discover with each student the right path to academic mastery, to creativity, and to responsibility." [2] It is located in the upper Connecticut River Valley village of Meriden, New Hampshire.

The academy is governed by a 21-member board of trustees. The school's physical plant is valued in excess of $30 million, and the school is supported by a $25 million endowment. The IMPACT capital campaign, which concluded in 2013 raised more than $47 million, surpassing its original $38 million goal. In 2018, Kimball Union Academy received an anonymous gift of $20 million for its endowment.

Electives are offered in history, English, math, and the sciences. There is an extensive arts program, with electives in music, theater, and the visual arts, including pottery and photography. 19 Advanced Placement courses are offered for qualified students in English, mathematics, sciences, history, studio art and art history, as well as all three languages taught at the academy.

Students must obtain a minimum of 19 credits for graduation (most four-year students complete 22 to 24 credits), including 4 credits of English, 3 of mathematics, 3 of history, 3 of a foreign language, 2 of science, and 1 of art. The normal academic load is five to six courses per tri-semester.

The average class size is 12 students; the student-faculty ratio of 6:1. During the evening study period, students study in their rooms under the supervision of faculty members and student proctors. The Freshman Orientation and Strategies Program is a required course that explores a variety of material throughout the first trimester including learning styles, technology and library resources, study skills and techniques and writing skill development. Freshmen are in specially supervised study halls; as students move up through the school they are progressively given more responsibility for the use of their own time.

Technology at KUA includes the use of SMART Boards in every classroom and the KUA 1-to-1 Laptop Program that puts a laptop in every student's hands.

The Kimball Union faculty consists of 49 full-time teachers, 70% of whom hold advanced degrees. Over 85% of the faculty live on campus. Tyler Lewis, appointed Head of School in 2019, is a graduate of Colby College and holds an M.Ed. from Harvard University. He previously served as Head of School at Bishop's College School. His teaching career began at Blair Academy.

Faculty members at Kimball Union fill many roles: teachers, advisors, coaches, and dormitory parents. Faculty members each advise about 6 students for whom they oversee academic work and scheduling. It is common for faculty and students to develop lasting friendships and bonds, especially with the "Dorm Parents" who routinely invite students into their apartment to socialize, watch a sports game, or just hang out.

The college selection process begins in the junior year when each student is assigned to a college advisor. A college information weekend for parents of juniors is held in the spring.

In the college advising resource room, juniors and seniors can use various sources of information, including catalogs and computer software, in making their college selections. Computer software and Internet access are available for applications, and college representatives visit the school regularly throughout the fall. 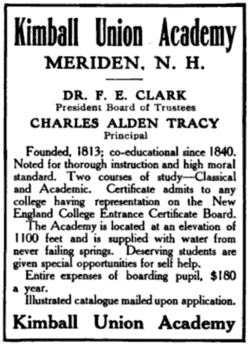 Advertisement for the school from 1909

An SAT preparation course is available to all juniors and precedes the spring administration of the test. Kimball Union's SAT I scores are higher than the national averages. Students also have the opportunity to take the ACT Assessment on campus.

For 2014/15 Kimball Union enrolled 340 students, 55% boys, 45% girls. One third of the student body are day students. Although the majority of students are from New England, students come to the academy from 25 states and 22 different countries.

Kimball Union Academy has an Honor Code intended to reflect its core values, support its mission, and guide the behavior of its community. In establishing its policies on conduct, Kimball Union considers it a priority to teach its students concern for others. Violations of major school rules are reviewed individually by a disciplinary committee of peers and faculty members, which makes a recommendation to the Head of School. Violations of minor rules are normally handled by a faculty member.

The original Academy building is Baxter Hall houses administration, academic offices and college counseling. The new Miller Bicentennial Hall, formerly the student center, is home to the humanities classrooms and new library. The new library houses over 20,000 volumes, more than 100 periodical titles, a large video/DVD/audio book library of more than 1500 titles, and a considerable microfiche collection. A dozen computer workstations provide access to a number of subscription databases and other online resources. Fitch Math & Science Hall houses the math and science classrooms and the E. E. Just Center - the home for the environmental science programs. There are three major computer labs and a language lab, and each academic department has an individual computer minilab.

The Elizabeth Dorr Coffin Library, formerly the school's library is now the school's MakerSpace and home to the STEM/Innovation Program.

Kimball Union operates ten residences ranging in size from 5 to 45 students, including Bryant Hall (1910), Chellis Hall (1835), Densmore Hall (1963), Dexter Richards Hall (1936), Hazelton House (1825), Kilton House (1830), Mikula Hall (1985), Rowe Hall (1820), Tracy House (1961), and Welch House (1835). The variety in dorm size gives students the opportunity to choose the environment that suits them best. There is a faculty member living on each floor of the larger halls and in each of the smaller houses. At least 60 percent of the students live in single rooms, with the rest in double rooms.

There is a health center staffed by registered nurses, and the Dartmouth–Hitchcock Medical Center is less than 30 minutes away. The Doe Dining Commons is the center of daily life at Kimball Union, with the newly renovated Student Center providing a recreational space where students can socialize, play games or browse the campus bookstore.

Every student is required to participate in two group activities a year, which include athletics, arts and independent pursuits. Kimball Union offers teams at different levels, so there is a team appropriate for every student who wants to play.

Athletics facilities center on the Whittemore Athletic Center, which includes the Akerstrom Ice Arena. There are eight playing fields for soccer, field hockey and/or lacrosse; a football field; baseball and softball diamonds; two basketball courts, an all-weather track; an ice hockey arena, with indoor turf in the off season; one weight room; and a swimming pool. A heated outdoor turf field was completed in 2006. The Miller Classroom Building, formerly the student center, houses a fitness center. Cross-country running and ski trails cut across portions of the campus and through surrounding woods, and there is alpine skiing 15 minutes away at Whaleback Ski Area.

In 2008 Kimball Union's Girls Alpine Ski Racing Team won the NEPSAC Class A Championships. The teams since then have also had impressive results including in 2009 when the men's team was third and the ladies placed second, in 2010 the women's team again placed second and in 2011 the men's team placed 2nd with the women in 3rd. [4]

Rivalries are strong between KUA and other New England preparatory schools. There is an especially strong rivalry between Kimball Union Academy and the Holderness School in Holderness, New Hampshire. A full day is dedicated to sporting events held between the two schools, with the visiting school transporting its entire student population to the other school for viewing and support of the games.

Although the rivalry with the Holderness School is quite large, there is no bigger rivalry than the one shared with Vermont Academy. The two schools share both mascots and color-scheme.

The Arts Center runs a cultural events series of concerts and gallery openings. There are at least three student shows in the theater each year, and the Concordians (an a cappella group) and Rock and Jazz Band perform seasonally. Mainstage theatre productions include one play, one musical and occasionally a third play, performed outdoors and popularly Shakespeare, though this third play has not taken place for several years.

Student leadership is extremely active at Kimball Union and there are many opportunities for students to participate. There is an elected student government and the president runs all-school meetings. Community service activities are planned through a standing committee and weekly community dinners are sponsored by a group called the Penny Fellowship. The academy has a fire brigade that operates as a part of the Meriden Volunteer Fire Department. There is an active diversity program called Relay and many other clubs and organizations that basically do the same thing.

French's Ledge is a hill that overlooks the western side of the campus and was formerly used as a ski slope by the school. The ski hill and a trail are now conservation land owned by the town of Plainfield. [5] The property is used for hiking, camping, mountain biking, snowshoeing and back-country Nordic skiing. It is a biologically diverse area, providing space and habitats for many species of flora and fauna. It contains 1.5 miles (2.4 km) of the French's Ledges Trail among other trails in a network that were built by former landowner Ira Townsend and the KUA outing club.

The ski hill had several structures including an A-frame, ski lift and jumps, among other things. In the early 1970s, it was host to the New England Prep School Championships. These contests included competitions on slalom and alpine races. [6]

Classes are scheduled Monday through Saturday (some Saturdays are set aside for alternative programming), with half days on Wednesdays and Saturdays to accommodate sports events. The daily schedule includes seven periods. All-school meetings take place twice a week, on Mondays and Thursdays. Scheduled community times and advisor/advisee dinners occur occasionally throughout the year. Sports and activities meet every day for two hours in the afternoon except on Wednesday and Saturdays when games take place.

There is a dedicated period at the end of the day for performing arts and activities, enabling them to meet without conflicts. Dinner, which is served at 5:30 p.m., is family-style or formal on occasion but remains informal, cafeteria-style the majority of the days. The evening study hall is from 8:00 to 10:00, and students must check into their dorms by 10. Freshman through senior evening schedules are adjusted appropriately for grade.

Weekend activities are many and varied. Saturday evening events include trips to dinner or the movies, on-campus movies, and dances, while on Sundays there are irregular shopping trips to town; trips to major ski areas, to Boston, and to concerts and sports events at Dartmouth; and outdoor activities such as apple-picking and hiking.

Apart from scheduled campus weekends, students may go home or, with their parents' permission, visit friends after their last obligation on Saturday. They must return to the campus by 7 p.m. on Sunday.

Tuition for the 2012-13 school year at Kimball Union was $47,830 for boarding students and $29,995 for day, commuting, students. For residents, the fee includes room, board, use of all facilities, and admission to some plays, lectures, and concerts held on campus. Charges beyond the basic fee include those for books, athletics store purchases, some arts events and transportation. An initial deposit of 10 percent of tuition is requested upon confirmation of enrollment, with the balance due on August 1 and January 1. Loan plans and tuition-refund insurance are available.