Kenton County is a county located in the Commonwealth of Kentucky. As of the 2010 census, the population was 159,720, [1] making it the third most populous county in Kentucky (behind Jefferson County and Fayette County). Its county seats are Covington and Independence. [2] It was, until November 24, 2010, the only county in Kentucky to have two legally recognized county seats. The county was formed in 1840 and is named for Simon Kenton, a frontiersman notable in the early history of the state.

Kenton County, with Boone and Campbell Counties, is part of the Northern Kentucky metro area, and is included in the Cincinnati-Middletown, OH-KY-IN Metropolitan Statistical Area.

Kenton County was established on January 29, 1840, from land given by Campbell County. It was named in honor of Simon Kenton, a pioneer of Kentucky. [3] [4] 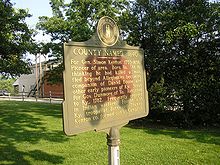 Historical marker for the county in Independence

The public education in Kenton County is extensive, with five school districts providing education to those in all parts of Kenton County, from the extremely rural southern areas to the highly urbanized north. The districts are:

The Catholic educational system is as extensive as the public system. These schools are operated by the Diocese of Covington's Department of Schools. The Diocese runs 17 schools in Kenton County.

Thomas More College is the only institute of higher learning wholly in the county itself. Northern Kentucky University had a Covington campus located at 1401 Dixie Highway until it closed at the end of 2008. NKU's main campus is not far from Kenton County – only about 4 miles from the Licking River. The Kentucky Community and Technical College System also operates the Gateway Community and Technical College. Classes are provided at GCTC locations in Boone County, Covington, Park Hills and Edgewood.

Kenton County is served by a county library with branches in Covington, Erlanger, and Independence. The Erlanger Branch has grown to be the busiest branch library in the state of Kentucky. [12]

Visalia and Latonia Lakes have been dissolved as cities within Kenton County.